When our daughter was about 2 1/2 years old, my husband, Kevin, and I began discussing having another child. We wanted our daughter Macie to have a sibling, and we wanted them close in age. It was not long after that I found out I was pregnant for the second time.

This pregnancy, just as my first, was relatively easy. When Macie was born, Hurricane Ike was in the Gulf of Mexico and quickly approaching Galveston, Texas. We had a rushed discharge and were sent home to “hunker down” and ride out our first hurricane. It was a chaotic time for our family so I prayed that our next delivery would be smooth and simple; however, that wasn’t the case this time.

At my 22-week ultrasound, the baby’s positioning made it difficult to get a clear image of the baby’s organs; however, we could clearly see that we were expecting a boy. Kevin and I were elated! Weeks later, at my 34-week ultrasound, my physician requested another ultrasound be performed so that better images of all organs could be taken. During the ultrasound, our technician was quiet and focused and I had an instant feeling that something was very wrong. When my OB came in the room, I could immediately tell I was right; her demeanor had changed. She told me that she wanted me to go to The Fetal Center and see Jerrie Refuerzo, MD, maternal-fetal medicine specialist affiliated with Children’s Memorial Hermann Hospital, because there was excess fluid around our son Mason’s heart and we would need a fetal echocardiogram (ECHO) to be sure.

With tears running down my face, I called Kevin to update him of the news. He was my rock and said we shouldn’t worry until we knew what we were dealing with. I then placed a phone call to The Fetal Center and spoke with a woman whom I now call my guardian angel, Coral, a clinical coordinator at The Fetal Center. It was two days before Thanksgiving and I desperately wanted answers but felt it was a long shot because of the holiday. Coral called me back first thing the next morning and said she had scheduled a fetal ECHO for that afternoon and an informal meeting with a pediatric cardiologist. She told me where to park, where to meet her, and guided me to all of my first appointments.

After the ECHO was completed, I met with a pediatric cardiologist affiliated with Children’s Memorial Hermann Hospital. She told me that a large part of Mason’s heart was underdeveloped; he had hypoplastic left heart syndrome (HLHS) and would need surgery soon after birth. I was worried that I would lose my baby but she assured me that there were procedures that could save my little guy. The pediatric cardiovascular (CV) surgeon was not available to meet until after Thanksgiving but fortunately the CV surgery nurse coordinator, Becky, was available. I met with Becky who patiently explained Mason’s heart anatomy to me. She helped me better understand what HLHS was and reassured me that Mason was in good hands.

Over the Thanksgiving holiday, Kevin and I shared this news with family and close friends. There were a lot of tears and an incredible amount of fear of what was to come. Kevin and I were both scouring the internet seeking answers and more information about HLHS. I distinctly remember finding a mother’s blog detailing the loss of her child to HLHS and how it tore her marriage apart. With that I decided Kevin and I had to come together. We openly discussed our marriage, our relationship with God, the possibility of losing Mason, and the impact this could have on our 3-year-old daughter. We made the decision that we would get through this together, relying on our faith and our family. 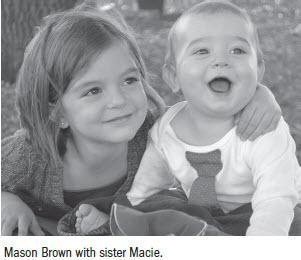 The following week, Kevin and I met with William Douglas, MD, pediatric cardiovascular surgeon; Becky, pediatric CV nurse coordinator; Coral, The Fetal Center patient care coordinator, and yet one more guardian angel, Karen Moise, RN, lead clinical nurse coordinator at The Fetal Center. We were provided with so much information about Mason’s condition, the surgeries he would face, and the struggles he and our family would face together. It was hard to take in, but we are still so thankful that these wonderful and skillful people took the time to sit down with us and answer every question we had. It was on this day, sitting around that table, that our family grew to include a few new special faces.

Over the course of a few days, we toured the NICU and the labor and delivery unit. On the day Mason arrived, we felt very comfortable at the hospital, which would be our new home for the next month or so. Mason was born on January 4, 2012, via cesarean section.

I visited my little guy later that evening in the NICU. The team had already run many tests and did his first of many ECHOs in order to prepare him for surgery. At 6 days old, Mason had his first open heart surgery, the Norwood procedure. Mason’s recovery was spent in the Pediatric Intensive Care Unit followed by the Children’s Special Care Unit, and after almost three weeks in the hospital, we were finally able to bring Mason home. He did well at home and when he was almost 6 months old, Mason had his second open heart surgery, the Glenn procedure. This time he only spent about a week in the hospital and has been home and doing AWESOME ever since!

We have been incredibly blessed since Mason joined our family. Having a child with a heart condition forced Kevin and me to see things very differently. We hug our daughter a little tighter and delight in how easy she is to care for. We cherish every moment, every milestone and every smile Mason gives us, and thank God to have him in our lives. One of the biggest lessons we’ve learned is not to sweat the small stuff. Life is full of unexpected and scary things but you just have to roll with it and make the most of every experience.