Timely Diagnosis and Treatment for TTTS Saves Mother and Her Twins 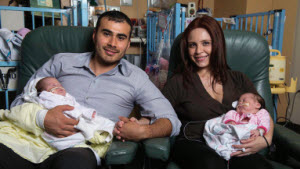 When Johanna Quezada-Ventura discovered she was pregnant with identical twins, she was both shocked and excited. As a mother of a 4-year-old daughter, she anticipated yet another uncomplicated pregnancy similar to her first, and didn’t think too much about the risk factors associated with identical twins as explained by her OB/GYN.

“Early on, this pregnancy was much different though,” said Quezada-Ventura, “I had severe morning sickness and at around 20 weeks other complications began to arise.” She had shortness of breath, extreme tenderness in her abdomen, and her muscles were painfully sore. “I called my doctor, and she said it was probably associated with the ligaments stretching to accommodate the twins.”

When her symptoms worsened after a few days, she went to the emergency room, where they ruled out appendicitis, gave her medication for gas, and recommended bed rest for the remainder of the weekend. “When I got home, my abdomen grew so large, so rapidly, that all of a sudden none of my maternity clothes fit. It was as if my clothes had gotten too small overnight.”

Quezeda-Ventura’s OB/GYN referred her to Jerrie Refuerzo, MD, a maternal-fetal medicine specialist with expertise in critical care obstetrics, maternal medical conditions and first-trimester screening. “My abdominal pain was so severe I was crying to the sonographer,” said Quezada-Ventura. “Dr. Refuerzo diagnosed twin-to-twin transfusion syndrome (TTTS), and we were immediately sent to the Texas Fetal Center at Children’s Memorial Hermann Hospital in the Texas Medical Center for treatment.”

TTTS is a rare complication of monochorionic twins in which they share one placental mass and connections exist between the circulations of the two fetuses within the placenta. These connections allow for the exchange of blood between the fetuses, and normally the exchange is balanced. But in up to 15 percent of cases, an imbalance develops, with one twin (the donor) becoming hypovolemic, while the other (the recipient) develops signs of volume overload and hypertension. The end result can be cardiac failure for one or both of the twins.

“Everything happened so fast after Dr. Refuerzo’s diagnosis,” said Quezada-Ventura. “I immediately left her office for Dr. Moise’s office, and his coordinator Jessica checked me in over the phone in the car on my way to the Medical Center.” Kenneth Moise Jr., M.D., is an internationally renowned specialist in the treatment of severe TTTS, and has extensive experience in open fetal surgery and other fetoscopic-based fetal interventions. He is co-director of the Texas Fetal Center at Children’s Memorial Hermann Hospital, concurrent with his position as professor, department of Obstetrics, Gynecology and Reproductive Sciences at UTHealth Medical School.

“Dr. Moise explained the TTTS diagnosis very thoroughly to me and my husband, and he was clear how important it was to stop the blood sharing,” said Quezada-Ventura. “In order to give both babies the best chance at survival, he recommended laser ablation, and he made sure we understood all the risks.” She was admitted to the hospital on the spot and prepared for surgery at 5:30 a.m. the following day. 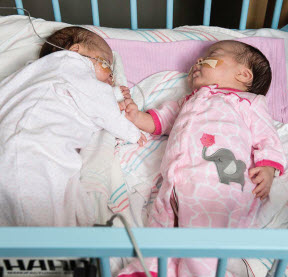 “Laser ablation of the communicating vessels between the two fetuses is the optimal therapy for TTTS,” said Dr. Moise, who completed Quezada-Ventura’s surgery in approximately two hours. During the procedure, a fetoscope is inserted into the sac of the recipient twin and the placental surface is evaluated for vascular connections. A diode laser is used to coagulate the blood in any connecting vessels, separating the placental circulations and stopping the transfusion process.

“We connect the dots across the entire placenta so that any smaller vessels that aren’t visible are coagulated shut, ensuring there is no more blood sharing,” added Dr. Moise, who together with his team has performed more than 800 laser ablations for TTTS.

He is considered one of the region’s preeminent specialists in the procedure, along with his partners Anthony Johnson, DO, Michael Bebbington, MD, MHSc, and Ramesha Papanna, MD, MPH.

During Quezada-Ventura’s ablation, Dr. Moise removed almost 2 liters of fluid from the recipient baby’s amniotic sac and coagulated shut seven vessels on the placenta. The first 24 hours after the ablation are considered critical, and mother and babies all came through successfully. “The first day after the surgery is a big day, as is day number seven. By day 28, any complications or risks from the surgery seem to go away,” said Dr. Moise.

Quezada-Ventura was released after 24 hours and was scheduled for weekly sonograms with Dr. Moise for the duration of her pregnancy. She was advised that she would be admitted to the hospital at 28 weeks gestation barring any other complications, as the twins were also considered high risk for cord entanglement and needed to be closely monitored.

Admitted at 27 weeks for contractions, Quezada-Ventura went into preterm labor at 28 weeks, five days gestation, when Camilla Rose (2 lbs., 14 oz.) and Katherine Emelia (2 lbs., 13 oz.) were born via cesarean section. The twins, who spent several weeks in the NICU and are now in intermediate care, have experienced no complications and are considered “feeders and growers.” Quezada-Ventura was released four days after their birth and the twins are expected to be discharged close to their October 2 due date. “I am so grateful for Dr. Refuerzo’s timely diagnosis and to Dr. Moise and his team for saving our daughters’ lives,” she said. “If it weren’t for them, the twins wouldn’t be here.”

Dr. Moise added that the outcome for Quezada-Ventura and her twins was optimal thanks to early intervention, and he expects mother and babies to suffer no long-term repercussions from their ordeal. “Although 76 percent of the mothers we treat take home both babies, sometimes the diagnosis is too late for treatment and it’s simply tragic,” said Dr. Moise. “Early detection is crucial to the successful treatment of TTTS. Once identified at around 16 weeks, identical twins should have an ultrasound every two weeks, and physicians should know the warning signs and take them very seriously.”

Twin-twin transfusion syndrome (TTTS) is a disease that affects 15 percent of identical twins that share a common placenta (monochorionic). Identical twins are far more likely than fraternal twins to develop life-threatening complications for both babies and mother. Among the risks they face are TTTS, which can be deadly if not diagnosed and treated early. Symptoms OB/GYN’s should be familiar with include: