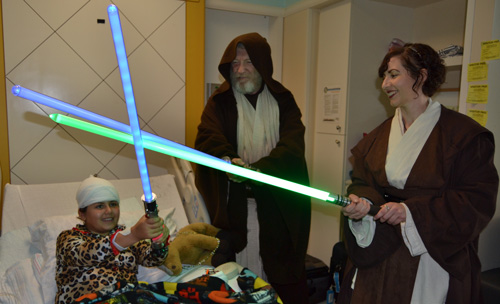 Members of the 501st Legion, a worldwide Star Wars fan club that celebrates the Star Wars universe using costumes and props, stopped by Children’s Memorial Hermann Hospital to see 10-year-old Lilly Flowers, a Star Wars enthusiast who has been hospitalized with repeated seizures.

Lilly was delighted to spend time with the two Jedi warriors, her favorite characters in the series, and was particularly pleased by the appearance of fictional Jedi master Obi-Wan Kenobi. She was even presented a lightsaber of her own to take home.

Children’s Memorial Hermann Hospital Child Life Specialist Leigh Ann Cutting arranged the meeting after discovering Lilly’s enthusiasm for the movie series.“Lilly is such a huge Star Wars fan that we wanted to find a way to bring the universe to her bedside,” Cutting said. “For many of these patients, a hospital stay is a difficult time, so we jump at every opportunity we get to provide them with a little joy and cheer to brighten their days. And we truly appreciate the 501st Legion for always going the extra mile to bring smiles to our patients’ faces.”

This is the latest visit by the group to Children’s Memorial Hermann Hospital. Members of the group dressed as various Star Wars characters appeared at the hospital in December ahead of the much-anticipated premiere of the film, “Star Wars: The Force Awakens.” Then on May 4, known worldwide as Star Wars Day or “May the Fourth Be With You,” several men and women clad as Jedi warriors, Stormtroopers, and Darth Vader stopped by to celebrate the occasion with fellow Star Wars enthusiasts.