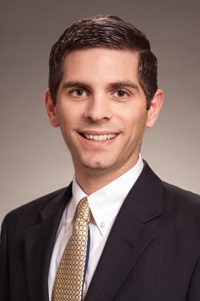 Ed Tufaro, Memorial Hermann Health System’s Vice President of Orthopedics, has been named to the Houston Business Journal’s 40 Under 40 Class of 2017.

Hundreds of individuals from across all Houston-area industries were nominated, including CEOs and a variety of for-profit and nonprofit organization leaders. Judges scored nominees on leadership, an ability to overcome challenges, and community involvement, narrowing the group to a final 40 honorees.

“I am honored and humbled just to be nominated among such an amazing group of people,” said the 37-year-old Tufaro. “This recognition is a testament to the organization I work for and the people on my team who help make a difference in the lives of others every single day. I am excited about continuing to do my part to help Memorial Hermann meet the growing needs of our community while providing the excellent health care that our patients have come to expect. Together we are committed to sharpening our focus on the solutions to our biggest health challenges to make Houston a healthier place to live.”

Tufaro graduated from Princeton University before completing his MBA, specializing in health enterprise management at Kellogg School of Management at Northwestern University. Immediately after graduating from business school in 2008, Tufaro accepted a job as an executive director at Memorial Hermann-Texas Medical Center (TMC), working as the chief of staff for the then-CEO.

In that position, he was charged with playing a critical role in developing a business plan to launch Memorial Hermann Cancer Center-Texas Medical Center. In 2010, he was tapped to expand and strengthen the hospital’s transplantation program. In that role, Ed developed a new administrative infrastructure and hired new staff, including the recruitment of a renowned surgeon to lead the program.

“I had the privilege of working very closely with Ed and found his enthusiasm infectious,” said Craig Cordola, formerly the CEO of Memorial Hermann-TMC, now Senior Vice President of Memorial Hermann and Regional President-West Region. “He had the unique ability to inspire and motivate those around him and his value to Memorial Hermann was quickly realized. It’s not surprising that he progressed quickly through the organization’s leadership ranks, and I applaud him for this well-deserved recognition in the Houston community.”

“In my line of work, I not only get the opportunity to work with an incredibly diverse mix of smart and talented individuals every single day, but I also get to play a role in delivering much-needed compassionate care to people who are ill, hurting and in need of help,” Tufaro said. “There’s no greater reward than catching one of my employees going above and beyond his or her line of duty to provide the kind of compassionate care that defines Memorial Hermann. It has been incredibly gratifying to watch as members of my team outperform their own expectations, achieving accomplishments they never thought possible. My reward is watching them succeed.”

Tufaro’s passion and drive to serve his community is rooted in his family life. His wife Katrina and their four children inspire his volunteerism. He serves on the board of Children at Risk, a Houston-based advocacy group dedicated to research, analysis and policy solutions aimed at improving children’s quality of life. He also volunteers his time to serve on committees for Western Academy and St. John Vianney Catholic Church.