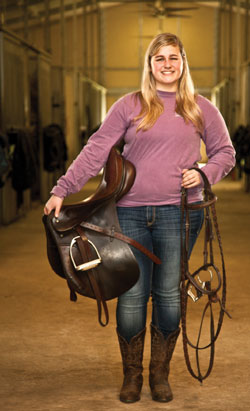 As a 14-year-old freshman on her high school dance team, Chloe Snell used to spend hours in the sun practicing her routines. At times, she would notice a tingling, pins-and-needles sensation and numbness in her arms and legs. Even long after practices were over, her heart rate remained accelerated and her exhaustion would not go away.

Fast-forward two years. Chloe was 16, a junior, and no longer a member of the dance team. She’d given up all physical activities – including her favorite, horseback riding – because the Texas heat caused her body to overwork itself. In addition to continued lethargy, she had moments when she felt she might pass out. Worst of all were the severe frequent migraines that made even getting out of bed extremely difficult.

Jump ahead one more year, to March of 2010, when Chloe was just weeks from turning 17 and a few months away from graduation. She’d spent months in the offices of a local neurologist and neurosurgeon as they tried to determine what was wrong. Finally, one of them referred her to Dr. Ian Butler, a pediatric neurologist affiliated with Children’s Memorial Hermann Hospital, about her many health concerns: headaches, lack of coordination, high blood pressure, tachycardia and excessive sweating of the palms of her hands and soles of her feet. She was also suffering from gastrointestinal pain. A local neurosurgeon had recently told her that she might have a fluid-filled cyst in her spinal-cord coverings.

Dr. Butler looked at images of her spinal cord and brain and did not observe anything suspicious. Still, he recommended laboratory tests for further evaluation. The laboratory studies detected a folate deficiency in her brain, including low levels of folic acid (vitamin B9), and decreased amount of cerebrospinal fluid due to a leak onto her nerve roots – a possible source of her symptoms. However, Dr. Butler and Chloe were certain there was something more that was contributing to Chloe’s many symptoms.

Did you know? The female-male dysautonomia rate is five to one.

In January 2011, Chloe was referred to Dr. Mohammed Numan, a pediatric cardiologist affiliated with Children’s Memorial Hermann Hospital and a colleague of Dr. Butler at the UTHealth Dysautonomia Clinic, to undergo a physiological tilt-table test where she was placed on a table at a 70-degree angle. Two special monitors measured her blood pressure, pulse, muscle 13blood flow and brain blood flow. Within four minutes of the half-hour examination, Chloe fainted. The diagnosis was immediate. Chloe was diagnosed with dysautonomia – a disorder of the autonomic nervous system, which regulates such actions as heart rate, blood pressure and digestion. While the condition is estimated to affect 1 in 100 teenagers, it can be difficult to diagnose. Dysautonomia is a complex condition that affects each individual differently and symptoms are often unpredictable, as many appear in any combination and vary in severity.

“Before Dr. Butler, it was years of [doctors] identifying issues, but never actually treating the underlying issues,” Chloe recalls. “He went above and beyond to do the tests and was the first who cared enough about discovering the root cause.”

“For patients with dysautonomia, blood is pooled in the pelvis and the legs, so there’s not enough blood going to the heart,” explains Dr. Butler, who is also director of the Division of Child and Adolescent Neurology at McGovern Medical School at UTHealth. “The body reacts to that, causing the heart to beat faster and the amount of blood that circulates to drop. This means you don’t get enough blood to the brain, leading one to faint, as Chloe did during the tilt-table test.”

Because dysautonomic conditions are often invisible, the tilt-table test is the most efficient method to identify the disorder, which can be the cause of everything from fainting, dizziness and lightheadedness, to anxiety, shortness of breath, migraines, gastrointestinal issues and forgetfulness – many of which Chloe had experienced for years. “It’s not a trivial condition; many kids drop out of school and lose confidence in their abilities,” says Dr. Butler. Patients often become more symptomatic after a stressor or physical activity, which can lead to chronic avoidance of physical activity, contributing to additional decline and isolation.

Did you know? Although often difficult to diagnose, dysautonomia is not rare, affecting over 70 million people worldwide.

Chloe, however, refused to let the condition get the best of her. After graduating from high school, she went on to earn a bachelor’s degree in Biomedical Sciences at Texas A&M University, graduating summa cum laude. She is currently, at age 22, working toward her Doctor of Veterinary Medicine degree at the school’s College of Veterinary Medicine & Biomedical Sciences. Her journey has not been an easy one, however. “It’s hard to motivate yourself to study when all you want to do is sleep because you’re not feeling well,” says Chloe. “But I knew I had the power to get through it in order to achieve my goals.”

There is no cure for dysautonomia; however, Dr. Butler and Dr. Numan use a four-tiered treatment approach that consists of pharmacology, education, lifestyle changes and physical therapy to help patients manage their symptoms. Chloe is currently on propranolol to help control her heart rate and folinic acid for her brain’s folate deficiency.

In the past two years, Chloe has slowly gotten back into physical activities. “When the symptoms first started, I would never go running with my dog,” she says. “I can now get through it and actually enjoy it.”

She still sees Dr. Butler and Dr. Numan for biannual checkups, but has not experienced any major problems beyond tiredness, occasional headaches, dizziness and joint swelling. With her medication, she is successfully able to get through long hours of classes every day of the week. “My hope is that raising awareness about this disease will help doctors better diagnose other teens with this condition,” says Chloe.

Chloe is focused on graduating in May 2017 and possibly pursuing a veterinary residency. She continues to manage her symptoms successfully and hopes to someday own a private veterinary practice.