As Hurricane Ike barreled its way toward Houston, Genny Marshall, TIRR Memorial Hermann adaptive sports coordinator, was safely on a plane headed for Beijing to attend the 2008 Paralympic Games. Marshall was chosen out of dozens of applicants from across the United States to be an ambassador as part of the Paralympic Academy Beijing, a program developed to mentor Paralympic coaches and athletes. 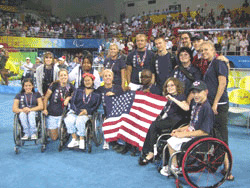 "This was the best experience I've ever had in my entire life," said Marshall. "We watched the U.S. women's sitting volleyball team win a silver medal, the U.S. men's quad rugby team win a gold medal, the first American woman Paralympic athlete coming out of the Iraqi war swim and the youngest Paralympic athlete win a silver medal in track and field."

Marshall, along with her fellow ambassadors and 13 student athletes ranging in age from 10 to 19, met and visited with several Team USA athletes. The inspiring Paralympians shared the different triumphs and struggles they faced on their journey to Beijing. But in the end, they echoed the same message - don't let anyone tell you that you can't do something.

On an excursion to the Great Wall, Marshall learned firsthand from the student athletes in her group about not letting others tell you what you can and can't do. The Chinese officials made much of the Great Wall accessible but there was a steep incline where the wheelchair athletes were told they couldn't go. The athletes didn't accept the fact that they couldn't go any further and they asked the ambassadors to carry them on their backs to the top.

"We walked up and down a 55 degree incline for a quarter to half a mile with these kids on our backs so that they could see the tallest point of the Great Wall," said Marshall. "It was amazing because the whole point of the academy is to say that there are no limits. These kids learned and lived that lesson."

The experience taught Marshall that she could apply the same philosophy to the Paralympic Sports Club Houston, TIRR Memorial Hermann's adaptive sports program. As a founding member of the Paralympic Sports Club, a nationwide network of paralympic sports programs endorsed by the U.S. Olympic Committee's Paralympics Division, Marshall plans to educate the Houston community of the possibilities facing people who have disabilities.

In the spring, the Paralympic Sports Club Houston will host the organization's first Paralympic Academy featuring Paralympic athlete speakers and introductory clinics to a variety of adaptive sports. Educational classes for social workers and school districts, as well as sessions for parents to learn more about the role sport plays in the lives of young people will be offered.

"There are 30,000 people in Houston with some type of disability," said Marshall. "Many feel that because they are disabled they can't do anything. Our program will show them that they don't have to accept any limitations."