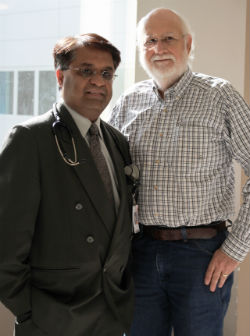 July 2, 2015, started out like any other day for Gerald Stokan. The 69-year-old awoke and walked into his home office to check his email from overnight.

“Everything was fine and then I got into the shower,” says Stokan. “My right hand started to feel funny and I couldn’t hold the soap. I didn’t think too much of it and just finished showering with my left hand.”

Stokan stepped out of the shower and began to get dressed. As he struggled with his shirt his wife asked if something was wrong. “I started mumbling. I couldn’t get the words out of my mouth,” says Stokan. It wasn’t until Stokan’s wife said to him, ‘are you having a stroke?’ that he realized exactly what was happening.

May is National Stroke Awareness Month. Each year nearly 800,000 people suffer a stroke in the United States. Stroke is the nation’s fifth leading cause of death and is a leading cause of serious, long-term disability, according to the U.S. Centers for Disease Control and Prevention.

Quickly identifying the symptoms of stroke and receiving immediate treatment can minimize the long-term effects of a stroke and even prevent death. Fortunately for Gerald, that’s exactly what happened.

“My wife wanted to call 911 but we live about two miles from Memorial Hermann Southeast Hospital and I thought it would be faster to just get in the car and drive ourselves,” says Stokan. “I couldn’t speak so I started pointing to my wife and towards the car as if to say, ‘you take me.’ It was like we were playing charades.”

Stokan’s wife drove straight to the emergency department at Memorial Hermann Southeast. “Recognizing the signs of a stroke and getting to a hospital equipped to handle stroke symptoms quickly and appropriately is critical to the patient’s survival and recovery,” said Dr. Nishith Majmundar, neurologist, affiliated with Memorial Hermann Southeast Hospital. “Our team knew within five minutes that Mr. Stokan was having a stroke. We were able to confirm a blood clot in his brain and then could begin to administer tPA (Tissue plasminogen activator).”

Tissue plasminogen activator, is the only drug approved by the U.S. Food and Drug Administration to treat ischemic stroke. Ischemic strokes occur as a result of an obstruction within a blood vessel supplying blood to the brain. If given intravenously within the first three hours after the start of stroke symptoms, tPA has been shown to significantly reduce the effects of stroke and lessen the chance of permanent disability.

“That’s what makes our team so successful,” says Dr. Majmundar. “The nursing staff and the entire stroke team know exactly what to do. They are very well trained and it’s that solid teamwork that sets us apart and allows us to provide our patients with the best care possible.”

Memorial Hermann Southeast Hospital recently received the American Heart Association/American Stroke Association’s Get With The Guidelines®-Stroke Gold Plus Quality Achievement Award with Target: StrokeSM Honor Roll. The award recognizes the hospital’s commitment to providing the most appropriate stroke treatment according to nationally recognized, research-based guidelines based on the latest scientific evidence.