40 Years of Life Flight, 40 Days of Thanks: Memorial Hermann Life Flight Celebrates 40th Anniversary by Extending its Appreciation to the Community It Serves 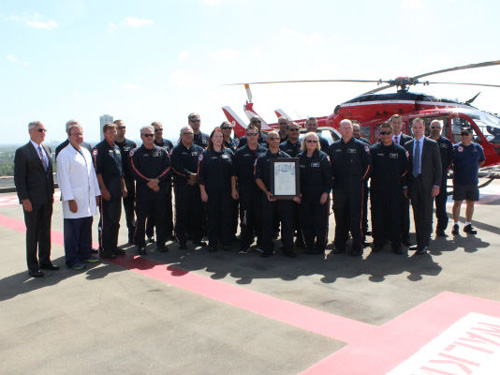 “Today is a special day, not just for Life Flight, but for the entire city of Houston, as we reflect back on the pioneering leadership that helped make this program possible and celebrate the many accomplishments that have defined Life Flight’s reputation as a trailblazer among air ambulance services,” said Brian Dean, Senior Vice President and CEO of Memorial Hermann-TMC.

Throughout the next 40 days, the Life Flight team will be showing their gratitude in various ways, including extending their thanks to EMS partners and first responders throughout the region who serve a key role in helping Life Flight retrieve Houston’s critically ill and injured patients, and by visiting campuses across the System for individual meet-and-greets and to thank colleagues for their partnership in saving lives.

Memorial Hermann will join the community in celebrating Life Flight’s trailblazing history and excellence in aviation safety and high quality, clinical care with a special social media campaign recognizing the countless lives saved by Life Flight over the years. Using the hashtag #LifeFlight40 on Facebook, Twitter or other social media channels, former patients and community members are invited to share their personal stories with and gratitude for Houston’s saviors in the sky.

In addition, the Memorial Hermann Foundation is commemorating the occasion by encouraging the community to continue its philanthropic support of the program by pledging to donate $40 in honor of Life Flight’s 40 years of service. Provided as a community service by Memorial Hermann, Life Flight operates as a hospital-based, non-profit organization and relies on community support and fundraising efforts to pay for the service. It costs about $3 million annually to support the program, none of which comes from tax dollars.

Along with the celebration, Memorial Hermann-TMC continues to honor the legacy of the founder and long-time medical director of Life Flight, legendary UTHealth trauma surgeon Dr. James H. “Red” Duke, who passed away nearly one year ago on Aug. 25, 2015. Dr. Duke’s visionary leadership helped revolutionize trauma care, not just in Houston, but across the country. In May, Memorial Hermann renamed its trauma institute, one of the nation’s busiest Level I trauma centers, the Memorial Hermann Red Duke Trauma Institute in his memory.

“From its earliest days, Life Flight has played a critical role in preserving Dr. Duke’s vision of providing a robust trauma care system for all patients, regardless of their wealth or status or whether they lived in the city, the suburbs, the rural outskirts or the frontier, as he liked to call it,” said Eric Von Wenckstern, administrative director of Life Flight.

“His passion was taking care of mankind, helping all people who were injured or sick, and making sure we were doing our best and maintaining the highest standards of care to ensure the best possible outcomes for patients. As we celebrate another watershed moment in Life Flight’s history, I know Dr. Duke would be immensely proud of what the program has achieved in 40 short years,” said Tom Flanagan, Vice President and Chief Operating Officer of Memorial Hermann-TMC.

Founded on Aug. 1, 1976 as a groundbreaking medical flight program aimed at expediting the transport of critically ill and injured patients across the Greater Houston area, Life Flight was the first air ambulance service in Texas and the second such program in the nation. In the decades since, Life Flight has maintained its premiere status and evolved to keep pace with the changing demands of trauma care.

“The program has evolved from a service that functions much like ambulances do today – hastening trauma patients as quickly as possible to the hospital – to a sophisticated and state-of-the-art program that begins delivering advanced, prehospital trauma care in the sky,” said Dr. Joseph Love, who is only the second Medical Director of Life Flight in the program’s history and an associate professor of surgery at McGovern Medical School at UTHealth. “We are now bringing the lifesaving capabilities of an emergency center directly to the patient. We are witnessing the future of trauma, not just in Houston, but across the country.”

Since its inception, the program has expanded from a single helicopter and a handful of crew members to a fleet of six helicopters and 74 crew members capable of retrieving patients within a 150-mile radius of the Texas Medical Center, or worldwide using fixed-wing transport. Each helicopter can carry up to two patients and comes equipped with state-of-the-art emergency medical treatments, including prehospital blood product administration, portable blood warmers, ultrasound diagnostics, video-assisted intubations and tools to open blocked airways. All crew members carry night-vision goggles during flight to help to improve safety. Two years ago, the program became the first air ambulance service in Southeast Texas to be granted authority to fly under instrument flight rules (IFR), which allows the crew to fly when visibility is limited or clouds are low.

Life Flight has been the winner of the Texas Department of State Health Services’ EMS Air Medical Service of the Year Award three different times in 2014, 2004 and 2001. The prestigious award honors a public or private air medical service in Texas that has demonstrated the highest standards in providing patient care, leading the way in innovation and commitment to patient care. The program was also recently named EMS/Air Medical Partner of the Year by the SouthEast Texas Regional Advisory Council (SETRAC), a nonprofit organization – which was also founded by Dr. Duke – whose role is to prepare counties across Southeast Texas for man-made or natural emergencies, disasters and mass casualty events.

The program was also recently featured in a six-episode docudrama series that aired on Lifetime TV called "Life Flight: Trauma Center Houston," which highlighted not only the Life Flight team but also Memorial Hermann-TMC and Children’s Memorial Hermann Hospital staff, nurses and affiliated physicians from McGovern Medical School. The original series gave viewers a front row seat to all of the real-life action inside the Memorial Hermann Red Duke Trauma Institute, following the clinicians as they dealt with high-risk, high-stress situations while racing against the clock to save the lives of their patients in critical condition.