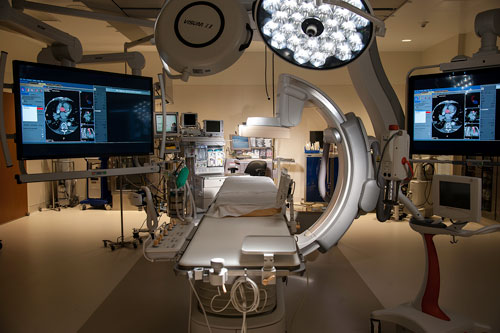 As part of its commitment to provide exceptional and groundbreaking cardiovascular care, Memorial Hermann Heart & Vascular Institute-Memorial City has made a significant investment of $3.3 million to open a 1,000-square-foot hybrid endovascular surgical suite.

The innovative suite combines a cardiac catheterization lab and an operating room into one space, enabling physicians to simultaneously perform minimally-invasive endovascular procedures and open surgeries without moving the patient from one operating room to another.

“Because the imaging and operating equipment is in the same room, it eliminates the need to transport a patient to another area of the hospital once a procedure has started,” said Arash Keyhani, D.O., a vascular/endovascular surgeon affiliated with the hospital. “The physicians designed the endovascular suite in partnership with hospital administration to ensure it could accommodate a wide range of procedures and enable clinical teams to facilitate more efficient and effective patient care.”

The types of procedures that can be performed in the suite range from lower extremity revascularizations, including angioplasty, stent, and bypass, to thoracic endovascular aortic repairs (TEVAR), which was performed recently on 89-year-old Beverly Herndon.

Herndon was suffering from a thoracic aortic aneurysm, an abnormal ballooning or widening of a portion of her aorta in her chest. If the aneurysm ruptured, it could result in sudden death. However, Herndon was adamant that she didn’t want surgery to fix the condition. She was hesitant because the traditional way to repair an aneurysm is to open the chest via an incision that spans from the belly button around the waist to the spine.

The good news was that Herndon was a candidate for a new, less invasive procedure at Memorial Hermann Heart & Vascular Institute-Memorial City. Once she was educated on her options, she decided to move forward with an endovascular repair.

In the short 90-minute procedure, he inserted thin, long tubes, or catheters, through small incisions in her groin. The catheters helped Dr. Durham guide and deliver a stent graft through the blood vessels to the site of the aneurysm. The stent graft was then deployed in the diseased segment of the thoracic aorta to reinforce it so that blood could safely pass through the artery again.

“Hybrid endovascular surgical suites are the way of the future because they allow for flexibility and speed in the treatment of patients like Ms. Herndon with the most complex cardiac and vascular conditions,” said Dr. Durham.

Dr. Keyhani agrees. Over the holidays, he treated Catherine Oland in the new surgical suite. Oland was in the process of scheduling a knee replacement procedure, but was required to have her heart checked prior to surgery. She also had been having severe pain in her hips and down the back of her thighs. During the check-up, it was discovered that she had chronic aortic occlusion, or a complete blockage of the aorta that was causing poor blood flow to her legs. It needed to be repaired right away, and Dr. Keyhani was called in as her physician.

Using a live three-dimensional image of Oland’s artery made possible by intravascular ultrasound, Dr. Keyhani was able to visualize, open and stent the blockage in real time.

Today, Oland is feeling much better and has scheduled her knee surgery.

“The hybrid endovascular surgical suite is an important addition to the Heart & Vascular Institute here at Memorial Hermann Memorial City,” said Byron Auzenne, Memorial Hermann Heart & Vascular Service Line Administrator, West Region. “It should signal to the community that we are serious about our mission to provide the latest advancements in cardiac and vascular care that is high-quality, safe, and as an added benefit, close to home.”