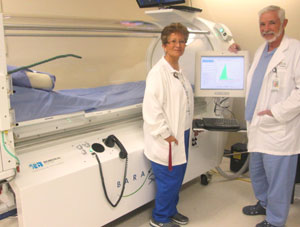 Memorial Hermann Northeast Hospital recently added a second hyperbaric chamber and plans to add a third in the near future.

“Hyperbaric oxygen therapy plays an important role in wound healing,” said Wound Care Medical Director Donald Sprague, M.D., who is board certified in wound care and hyperbarics. “It was originally developed for the treatment of decompression sickness in divers in the 1960s. However, the therapy is now used to treat a wide variety of medical conditions.”

Hyperbaric oxygen therapy is the use of high-doses of oxygen as a drug. The use of pure oxygen in a pressurized chamber yields a massive influx of oxygen to the body, including areas of insufficient blood flow.

It is used to treat patients who have chronic conditions such as non-healing wounds, diabetic and vascular insufficiency ulcers, bone and soft tissue infections, compromised skin grafts and flaps, thermal burns, and tissue damaged by radiation, and those individuals suffering from carbon monoxide poisoning, or crush injury and compartment syndrome.

Sprague is new to Memorial Hermann Northeast, joining the staff just this year. As a Naval Captain, he was a naval flight surgeon and senior medical officer on aircraft carriers. On his final tour, Sprague served as the force medical officer responsible for all medical aspects of six aircraft carriers and 50 flight surgeons attached to the Naval Air Forces Pacific Fleet. After retiring from the U.S. Navy, he worked at NASA as medical safety officer for astronaut training. Most recently, Sprague was the medical director of the Department of Hyperbaric Medicine at Foundation Hospital in San Antonio.

The Northeast Wound Care Center® opened in May 2005 as an outpatient department of Memorial Hermann Northeast to bring state of the art healing to Humble, Kingwood, and surrounding communities.