Pregnant? Patience May Benefit You and Your Baby 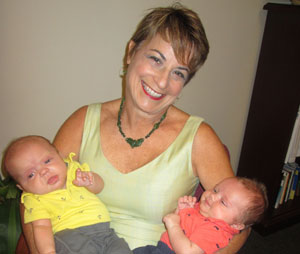 We, women, love our babies, but pregnancy…not as much. Particularly when the Texas summer seems to direct its heat and humidity specifically at us, we are ready to deliver and hold that little one in our arms.

In the past, many women expected to be induced two weeks before and no longer than two weeks after their term. But, just like any living organism, your body and your baby develop at their own rates. Medical research shows there are more objective ways of determining when you are ready to deliver.

Your doctor may use a pre-labor scoring system called a Bishop score, or cervix score, to objectively evaluate your readiness for labor. It is also used to assess the odds of a spontaneous pre-term delivery.

A Bishop score is a combination of several different things from your physical exam:

In a study of 6,721 first-time moms in the Intermountain Healthcare System, 26.3 percent of elective induction patients with a score of four were forced to deliver by a cesarean section; about a third with a score of two or three; and more than half with a score of one.

In other words, if you are not sufficiently developed, then an elective induction may significantly increase your risk of cesarean section.

Most mothers and babies do well after a cesarean section, but you do face a longer recovery, greater cost, and a delay in your ability to return to normal activities or work. It is definitely major surgery and does carry more risk than a normal vaginal delivery. These risks include infection of the incision or the uterus; heavy blood loss; organ damage; blood clots in the mother's legs or lungs; injury to you or your baby; and problems from the anesthesia, such as nausea, vomiting, and severe headache.

For your baby, contractions of labor during a vaginal birth help prepare his or her lungs to breathe air. The compression of the baby’s thorax pushes out the amniotic fluid during the birth process and helps to prepare the lungs to breathe air. Babies born by caesarean section have a higher risk of respiratory distress syndrome than babies born vaginally.

In addition, uterine rupture is a real possibility with a vaginal birth after caesarean. This is where the baby breaks through the wall of the uterus into the mother's abdominal cavity. If this occurs, your doctor will perform an emergency cesarean section to prevent life-threatening complications such as heavy bleeding and infection for you, and brain damage for your baby. In some cases, your uterus might need to be removed (hysterectomy) to stop the bleeding and save your life. If your uterus is removed, it will be impossible for you to get pregnant again.

The point I hope to make is that rushing into an induction may force you into a situation where you require a cesarean section. A cesarean section does have serious consequences for both you and your baby, now and in the future.

The cesarean section rate in the U.S. today, affected by both the number of inductions and a reluctance to encourage vaginal birth after caesarean deliveries, continues to rise. But, one of the key reasons is the misguided idea that induction on a certain day is a good, normal thing for moms and babies.

Nothing is as amazing as a healthy, safe birth. So, be patient and work with your doctor as you decide on the best choices for the delivery of your precious little one.