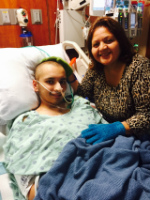 For the first time ever in the state of Texas, the team at Memorial Hermann Heart & Vascular Institute-Texas Medical Center used the advanced technology of a minimally-invasive machine called the Hemolung Respiratory Assist System (RAS) to help save the life of an 18-year-old Texas boy. Its historic use at Memorial Hermann Heart & Vascular Institute-TMC is only the fourth time the machine has been used in the United States, helped remove carbon dioxide from Uriel Alvarado’s blood in a process called respiratory dialysis.

Hemolung RAS is the first fully-integrated Respiratory Dialysis® system. Similar to the more common renal dialysis which removes waste from the body in order to ensure a safe level of chemicals in the blood in case of kidney failure, the Hemolung RAS uses advanced technology to support the lungs by removing carbon dioxide and delivering oxygen directly to the blood by using a circuit outside the body and a small venous catheter. The use of the machine allows the lungs to rest and heal.

Doctors recently discovered that Alvarado, who has a history of testicular cancer, had a mass in his chest. Due to the mass, he had to have a lung removed in June 2015. While recovering, Alvarado had abnormal levels of carbon dioxide in his blood that put him at high risk of respiratory arrest, which could have been fatal.

“Unfortunately, Uriel’s struggle with cancer and recent lung removal meant the anatomy of his heart was slightly distorted and he was not a good candidate for conventional extracorporeal membrane oxygenation (ECMO), a device that provides support to those whose lungs and heart are not able to support the body properly,” said Keshava Rajagopal, MD, PhD, cardiothoracic and vascular surgeon with Memorial Hermann Heart & Vascular Institute-TMC’s Center for Advanced Heart Failure and assistant professor of cardiothoracic surgery at McGovern Medical School at UTHealth. “Lung diseases manifest in different ways in different people, and Uriel’s problem was more related to high carbon dioxide rather than low oxygen. It was considered an emergency situation and we were lucky to have rapid access to the Hemolung RAS.”

“Before using the Hemolung RAS, we had exhausted all options,” said Bindu Akkanti, MD, Medical Director of the Heart Failure Intensive Care Unit with Memorial Hermann Heart &Vascular Institute-TMC and assistant professor of critical care medicine at UTHealth. “The patient improved within hours of being on the device; it is a true advancement in medicine. We are evaluating new technologies at the bedside every day, and the success of this patient is the result of excellent multidisciplinary efforts between the intensive care physicians and the other members of the ECMO service, including the cardiothoracic surgeons and the heart failure experts.”

After three days on the device, Alvarado saw drastic improvements and was able to be removed from the machine completely and continue his recovery from the comfort of his own home. Now, when he isn’t taking classes at South Texas College in McAllen, Texas, Alvarado has returned to his passion of mixing music. He is also working to pursue his new dream of becoming a nurse someday.

“Uriel was truly inspired by the clinical team who helped save his life,” said Maria Alvarado, Uriel’s mother. “Becoming a nurse is a way he feels he can give back to those who might be suffering like he was. At only 18 years old, Uriel still has his whole life ahead of him. There’s no telling what all we could see him do.”