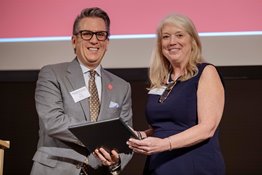 Carl Josehart, Sr. Vice President and CEO of Post-Acute Care Services for Memorial Hermann, has been recognized as a distinguished alumnus of the Brown School at Washington University in St. Louis. Josehart earned a master’s degree in social work from the school, considered one of the best in the country by U.S. News & World Report.

“I’m humbled to be recognized by the Brown School and to be included among a group of individuals who have helped to make a difference in the lives of so many people,” said Josehart. “The Brown School provided me a solid foundation through exposure to research, public policy, organizational dynamics and organizational thinking. At the time I didn’t realize how much of a role those experiences would play in my emergence from a clinical to an administrative role in health care.”

In spite of growing up with a father who was a long time healthcare administrator and consultant, Josehart never set out to lead one of the nation’s top rehabilitation hospitals, TIRR Memorial Hermann. He was firm on his plan to stay on the clinical side of healthcare but his father thought otherwise and encouraged Josehart to explore administration.

“The turning point came early in my career as a clinician when I was asked to help implement a new patient care process that was being met with a lot of resistance,” says Josehart. “Leadership felt my expertise in psychiatry, a field where I focused on helping people to change, would be a skill that would be useful in leading change at an organizational level.”

Josehart quickly discovered many of the skills he’d been using as a clinician - such as gathering data to complete an assessment, diagnosing a problem, determining a plan of care and then monitoring a patient’s progress - could be done on an organizational level. “My philosophy as an administrator has always been that administration is really clinical practice on an organizational level. Instead of seeing one patient at a time I’m responsible for all the patients all the time.”

Today Josehart proudly displays a picture of his father, who passed away in 1982, directly above his desk. The photo serves as a constant reminder of the influence he had on Josehart’s career and his father’s desire to see him on the administrative side of healthcare. “I feel like my dad is getting a great deal of satisfaction seeing me sitting at this desk each day,” Josehart says with a laugh.

Josehart joined Memorial Hermann in 2006 as CEO of TIRR Memorial Hermann. His role expanded in 2015 to include skilled nursing, home health, hospice, durable medical equipment and other services in a broader Post-Acute Care Network.

Josehart is an active supporter of the ReelAbilities: Houston Film and Arts Festival serving on the honorary committee. He is also on the Board of Trustees for the Holocaust Museum Houston. In May 2016, Josehart graduated from the American Leadership Forum Class XXXVI. The American Leadership Forum is a non-profit organization whose mission is to join and strengthen diverse leaders to serve the common good.

Josehart was recognized among eight alumni and friends of the Brown School at Washington University in St. Louis on March 6 during the 36th annual Distinguished Awards ceremony.