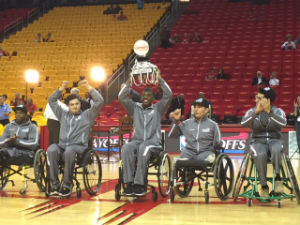 The Houston Rockets are in the middle of a championship run but took the time to honor the TIRR Memorial Hermann junior Hotwheels basketball team last night.

“We’re so proud of our team,” says Carl Josehart, Sr. Vice President and CEO, TIRR Memorial Hermann. “They’ve worked so hard and have earned this recognition.”

The junior Hotwheels were invited to center court before last night’s game against the Dallas Mavericks to be recognized as the National Wheelchair Basketball Association’s National Champion. This is the junior Hotwheels second national title in three years.

“They fought through a lot this season,” says assistant coach Ava Skrabanek. “They deserve it and I’m so happy to be a part of the family.”