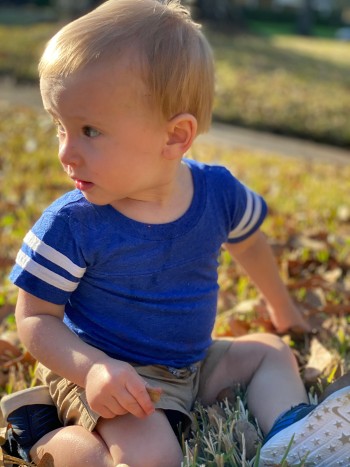 When their unborn son was diagnosed with a rare and potentially life-threatening congenital birth defect, Carrie and Jordan Farrar knew they needed to find the experts, and fast. Fortunately, the couple from Tyler, Texas, was referred to The Fetal Center at Children’s Memorial Hermann Hospital, affiliated with McGovern Medical School at UTHealth and UT Physicians, in Houston and ultimately into the skilled hands of affiliated pediatric surgeon KuoJen Tsao, MD, co-director of The Fetal Center.

The couple’s journey began in Carrie’s 16th week of pregnancy. “At my ultrasound, my OB discovered an ‘artifact’ on the baby’s lung and referred us to a maternal fetal medicine specialist in Dallas. The specialist, who was better equipped to make a more precise diagnosis, ran more tests and found a fluid-filled cyst on the left upper lobe of our baby’s lung,” recalls Carrie.

The specialist diagnosed a condition known as congenital pulmonary airway malformation, or CPAM, a cystic mass of abnormal lung tissue that prevents the tissue from functioning as normal lung tissue. In a small number of cases, the cyst may grow so rapidly that it can cause compression, leading to heart and lung failure. In an effort to shrink the cyst, the specialist prescribed a steroid for Carrie then referred the Farrars to The Fetal Center for specialized care.

Referred to The Fetal Center at Children’s Memorial Hermann Hospital

At The Fetal Center, the couple was seen by affiliated maternal fetal medicine specialist Ramesha Papanna, MD, who, along with Dr. Tsao and other members of The Fetal Center team, would end up following the family throughout Carrie’s pregnancy and beyond. 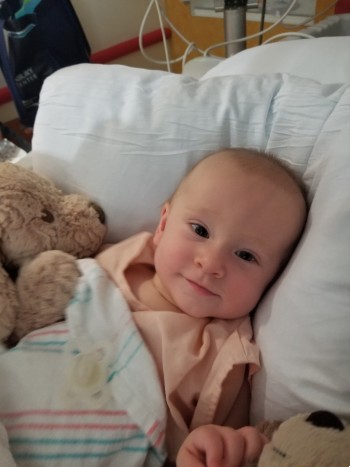 “Dr. Papanna and Dr. Tsao collaborated to create a game plan for the baby,” says Jordan. “They said they would monitor the cyst, to make sure it didn’t become a problem during pregnancy. If the cyst were to grow at a faster rate than the baby’s chest, Dr. Papanna would perform fetal surgery in utero (before birth) to remove it. If not, the baton would be passed to Dr. Tsao to potentially perform surgery after birth.”

For the next 10 weeks, Carrie and Jordan drove from their home in Tyler every week or two to see Dr. Papanna. At about 34 weeks, the team determined that fetal surgery would not be necessary and worked with the family to prepare for delivery at a hospital in Dallas that was equipped to handle respiratory problems during and after delivery.

“We do what is in the best interest of the patient and the family,” says Dr. Tsao. “We could have suggested they deliver in Houston, at Children’s Memorial Hermann Hospital. But we knew they wanted to deliver in Dallas, closer to their family. So we partnered with the team in Dallas to create a care plan to ensure a safe delivery for mom and baby.”

Charles Andrew Farrar was born in Dallas on January 18, 2019, weighing a healthy 6 pounds, 2 ounces. It was “a perfect birth,” says Carrie. Shortly after birth, Dr. Tsao examined the newborn and told the Farrars he would re-evaluate the baby’s condition at four to six months. In the interim, the couple stayed in communication with Dr. Tsao via the hospital’s telemedicine program. “When Andrew developed respiratory problems, we connected with Dr. Tsao via videoconference, and he connected us with a pulmonologist on the team. That was one less trip we had to make,” says Carrie. 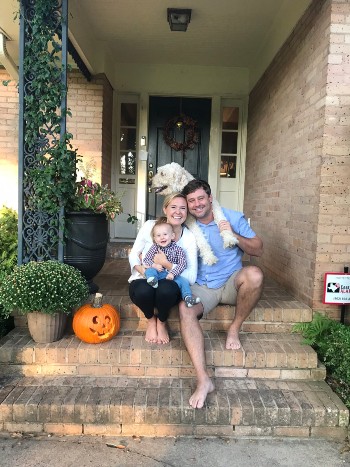 When Andrew was 6 months old, a CT scan showed the cyst was fairly large, and Dr. Tsao recommended removing it. “Even if the cyst isn’t causing problems at the time, it can continue to grow, potentially causing infection and problems with breathing. In a small but not inconsequential number of cases, it can lead to lung cancer. Weighing the risks and benefits of surgery, the Farrars elected to move forward with the surgery,” says Dr. Tsao.

When Andrew was 8 months old, Dr. Tsao performed minimally invasive lung resection surgery to remove the cyst. The surgery was a success, Andrew healed quickly, and today he is a normal, healthy growing boy. “We are so grateful to God and to the team at Children’s Memorial Hermann for making this happen,” says Carrie.

The Farrars wanted the absolute best care for their son. But it was only upon meeting Dr. Tsao that they knew they were in the hands of the experts. “We told Dr. Tsao about the Dallas specialist’s use of a steroid to reduce the size of the cyst. Turns out Dr. Tsao wrote the first paper on the use of that technique, years ago” says Jordan. “When you get the diagnosis and are trying to navigate your way, it’s comforting to know you’ve found the guy who wrote the book on it.”