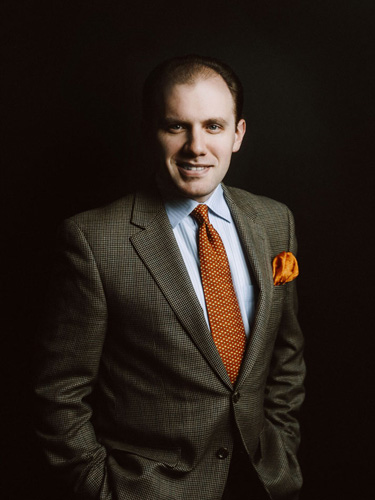 After a devastating automobile accident that nearly took his life, Anthony Vallone is back at work at Shell Trading with barely a limp, thanks to his strength of character, a supportive family and the orthopedic trauma team at the Memorial Hermann Red Duke Trauma Institute. “I have nothing but the utmost respect for all of my doctors and therapists,” he says. “Without them, I wouldn’t be where I am today.”

In September 2015, Vallone got an early start on the drive south on IH-45 from Dallas to his home in Houston. Around 5:30 a.m. his car was hit head on by a vehicle that entered the interstate from an exit ramp, going the wrong way. “The last thing on your mind when you’ve driven a route 100 times is that someone will be driving the wrong way on the freeway,” he says. “I was going 75 and they clocked her at 80, so we hit at a force of 160 miles per hour.”

Vallone’s car flipped and he landed upside down, hanging by his seatbelt. When the airbag engaged, it knocked him out. Rescuers found him unconscious, with his knees at his shoulders and his head under the steering column. “That was a Monday. I woke up the following Saturday,” he says.

A passing motorist called 911. After being extricated from his car, Vallone was taken by air ambulance to a hospital in Waco, where trauma physicians attempted to stabilize him. In a brief moment of consciousness on the way to the OR, he gave a nurse his mother’s phone number.

Two days later, he was transported by Memorial Hermann Life Flight® to the Red Duke Trauma Institute at the request of his family, which has a long history of board participation and philanthropic involvement with Memorial Hermann. His orthopedic injuries were extensive and terrible: a severely shattered ankle, a broken pelvis and a collapsed spine with lumbopelvic dissociation.

In a daylong surgery, orthopedic traumatologists Milton “Chip” Routt, MD, and Shah Dodwad, MD, repaired his pelvis and spine. “There are several ways to break the back of the pelvis where it meets the spine, and Anthony’s was as bad as it can get,” says Dr. Routt, a professor in the Department of Orthopedic Surgery at McGovern Medical School at UTHealth. His areas of expertise include traumatic pelvic ring disruptions and acetabular fractures.

“We worked together as a team, Dr. Routt and I, repairing both the spine and pelvis in one operation,” recalls Dr. Dodwad, an assistant professor of orthopedic surgery at the medical school and a specialist in complex spine surgery. “The injury crushed nerves in Anthony’s spine. We relieved the pressure on the nerves and stabilized his lumbar spine and pelvis with rods and screws to allow it to heal.”

In a separate procedure, William McGarvey, MD, an associate professor of orthopedic surgery, repaired Vallone’s shattered ankle. “His ankle was fractured in multiple places – tibia, fibula and talus,” says Dr. McGarvey, who specializes in surgery of the foot and ankle. “We manipulated it into the proper position and stabilized it with an external fixation device to hold the ankle in position and allow the soft tissue to settle down.”

A week later, Dr. McGarvey and his team repaired the fractures in a complex surgery. “He had a lot of swelling, and we had to work through some fractures to get to others,” he says. “We limited the amount of incision to prevent further soft-tissue damage. In addition to many fracture lines, there was missing bone. Gradually we were able to piece it together in a way that gave him a good result.”

Vallone was hospitalized at Memorial Hermann-Texas Medical Center for three weeks. After a week as an inpatient at TIRR Memorial Hermann, he asked to be released to home. “We had a hospital bed brought in, and my family was there for me around the clock,” he says. “A physical therapist worked with me at home. Since I was non-weight bearing, there was very little I could do. I had the upper body strength to lift myself up, but my hips and legs took the brunt of the accident.”

It took Vallone a year to reach his goal of walking without a walker, cane or crutches. What kept him going was his family. “I have a huge family, and they pull together like no other. They truly dropped everything to take care of me. It was incredible and one of the most humbling experiences of my life. When you can’t do things for yourself and your life literally gets flipped upside down, you really learn what it means to care for somebody.”

Vallone now sees Dr. Routt, Dr. Dodwad and Dr. McGarvey in follow-up as needed. “My goal was to finish physical therapy so that I could continue on my own,” he says. “I work out every day. I wanted to get back to my own home and my job. I had to get back to being me.”

All three surgeons consider his recovery remarkable. “Anthony is really tough, smart and well informed,” Dr. Routt says. “He knows what he’s got and knew what he had to do to overcome it. We rebuilt his pelvis, spine and ankle, and he worked hard to optimize the outcome of his surgery.”

“An ankle injury like Anthony’s can leave patients with posttraumatic arthritis,” Dr. McGarvey says. “He healed beautifully and went on with life.” Vallone spent months in a wheelchair, then graduated to a walker and crutches. “The damage to nerves in his spine caused significant weakness in both legs,” Dr. Dodwad says. “Every time I saw him after the accident, he was working harder and harder. Eventually he could walk into my clinic instead of using a wheelchair. To see that happen is amazing. It speaks to his character – that of someone who will always keep moving forward.”