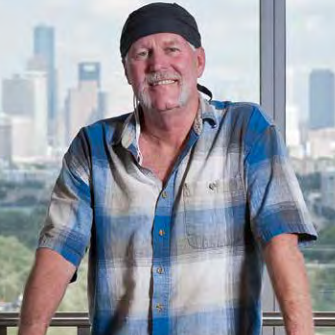 Van Buren, Arkansas, resident Lenord Lewis was working in Houston when his recurrent headaches became so bad that a co-worker drove him to Bayshore Medical Center in Pasadena, Texas. After reviewing the results of an MRI and CT scan, the emergency physician called an ambulance to transport the 55-year-old to the Mischer Neuroscience Institute at Memorial Hermann-Texas Medical Center.

“When I got there, they told me they were operating on Monday,” says Lewis, who repairs electrical generators for General Electric’s hydro and nuclear power operations. On April 12, 2010, the medical team at Mischer Neuroscienc Institute at Memorial Hermann-Texas Medical Center performed a craniotomy and resected a golf ball-sized brain tumor. The pathology report confirmed glioblastoma multiforme (GBM).

Of the estimated 19,000 primary brain tumors diagnosed in the United States each year, approximately 60 percent are gliomas, a heterogeneous group of neoplasms that differ in location within the central nervous system, growth potential, invasiveness and response to treatment. With the exception of brainstem gliomas, GBM has the worst statistical prognosis of any central nervous system malignancy – a median survival of 14.6 months. Only 3 to 5 percent of patients survive for more than three years, and they are classed as long-term survivors.

Following the surgery, Lewis was seen by Jay-Jiguang, Zhu, MD, PhD, a fellowship-trained neuro-oncologist at MNI and an associate professor in the department of Neurosurgery at the UTHealth Medical School. Dr. Zhu had recently joined the MNI team from Boston, where he trained at Massachusetts General Hospital and served on the faculty of Tufts University. He worked with Lewis to develop a plan of care.

Lewis received standard-of-care treatment – temozolomide chemotherapy for 42 days with concurrent radiation. But the tumor recurred. An MRI scan in August 2010 showed a change at the surgical cavity in his left temporal lobe. This small area of progression was treated with Gamma Knife® radiosurgery, then Lewis resumed chemotherapy with temozolomide until February 2011. At that time, Dr. Zhu offered him the opportunity to try a new technology that generates an electric field to the brain through electrodes applied to the scalp. Made by NovoCure, the NovoTTF-100A has been approved by the FDA for treatment of recurrent GBM and is being tested for safety and efficacy as an adjuvant treatment in newly diagnosed GBM patients.

A locally or regionally delivered treatment, tumor treating fields (TTF) therapy uses electric fields within the human body to disrupt the rapid division and spread of cancer cells. Developed to provide physicians and patients with a fourth treatment option for cancer in addition to surgery, radiation therapy and chemotherapy, TTF therapy is designed for continuous use during the day and night, with portable battery packs that allow patients to maintain their normal daily routine while undergoing treatment.

“Studies have shown that low-intensity, intermediate frequency electric fields stunt the growth of tumor cells,” Dr. Zhu says. “The device is designed to administer alternating electric fields to the region of the malignant tumor by means of insulated surface electrode arrays.”

Lewis will wear the NovoTTF-100A for two years while continuing the standard chemotherapy regimen of temozolomide five days out of every 28, following an initial four cycles of Avastin® once every two weeks. Four pads, each of which contains nine electrodes, cover his head. He wears the pads for three days, then removes them, washes and shaves his head, and applies a clean set of electrodes.

“With a median survival of 14.6 months, the odds of making it three years after a diagnosis of GBM are low,” Dr. Zhu says. “Lenord is able to maintain normal activities of daily living, and he’s very upbeat. That’s the key to success in addition to therapies. His wife and family provide excellent care and support for him, which has allowed him to keep up the long-distance medical care. We feel that our care is top quality, and he and his wife feel that it’s worth the travel time and expense to be treated at MNI.”

Looking to the Future

Lewis and his wife, Celeste, participated in the 5K Run for the Rose in Houston in March 2012, an event that funds brain cancer research. “There are so many cancer patients,” he says. “I hurt for the others. If I can show how good life is and how other people can enjoy it despite cancer, that’s what I want to do. We don’t view Dr. Zhu and the medical team as just doctors. We feel like they’re family helping us. If I can pull a couple more years with the device and then a couple more years after that – and a couple more years after that – that’s what I’m going for. You’ve just got to bite the bullet and keep going.”