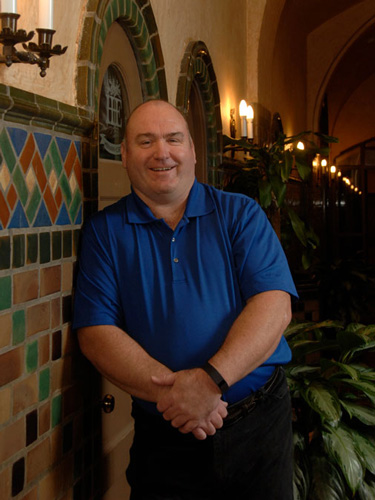 After working his usual night shift on a Tuesday, and then the day shift the following Thursday, Brian Southwell was lying in bed in the wee hours of the morning unable to sleep. “It was a few days before Christmas, and I was going to have my daughter for the weekend,” he recalls. “I thought, instead of taking a four-year-old shopping at Walmart right before Christmas, I’d just get up and go now because I couldn’t sleep anyway.”

It was 4:30 a.m. when the 45-year-old left his home in Onalaska, Texas, to make the 14-mile drive to Livingston. Along the way, he fell asleep at the wheel of his mid-size Chrysler sedan. He doesn’t remember the accident but has sharp recall of everything that happened immediately afterward.

“I called 911, and they got my location from the GPS on my phone,” he says. “I could hear cars behind me on the road, but they couldn’t see me because I was hidden in the trees. I tried to get to my flashlight out of the trunk but I was too injured to move. Then I remembered the flashlight on my cell phone and stood it up on the dash against the windshield. That’s how the EMTs found me.”

Southwell was taken to the community hospital in Livingston with a broken rib, several fractured ribs, a fractured sternum and intestines ruptured by the seatbelt. The impact also severely shattered his right ankle. As soon as they rolled him through the door of the emergency center, he was told he would be transported to Houston.

Fog had grounded Memorial Hermann Life Flight®, and he was taken by ambulance to the Memorial Hermann Red Duke Trauma Institute in the Texas Medical Center, a 77-mile trip. On arrival, the top-notch multidisciplinary trauma team went to work to save his life.

Southwell underwent multiple surgeries to repair his ruptured intestines, including a temporary ostomy that was later reversed, a series of abdominal skin grafts and reconstruction of his abdominal wall. Fellowship-trained orthopedic traumatologist John Munz, MD, an assistant professor of orthopedic surgery at McGovern Medical School at UTHealth, was called in to repair Southwell’s shattered ankle.

“Brian had a dislocation, a talar neck and head fracture, and a navicular fracture – a significant ankle injury,” Dr. Munz says. “Because of his bowel and colon injury, he had been hospitalized for nearly three weeks before I could repair his ankle. It was a complex reconstruction, with plates on both sides held in place by seven screws and two pins. It went well.”

It took Southwell six months to recover from his ankle injury. After the surgery, he was non-weight bearing for five months. He went through rehabilitation with a home health coach, with physical therapy and protected weight bearing with a boot in the fifth month, then heavier weight bearing without a boot at month six.

“Brian is a very motivated and determined guy,” Dr. Munz says. “He kept his sense of humor through it all and always had a good attitude. He completely bought into his treatment plan and was very committed to walking again. Because of how severe the injury was, I initially thought we’d have to do further reconstruction to give him a durable ankle. But we didn’t, thanks to his drive to get better.”

Southwell remembers his worst moments: dealing with the physical limitations and psychological effect of using the walker. “I was 45 years old, in perfect health and very active,” he says. “I was alone at home and found it difficult even to make lunch for myself. I appreciate everything Dr. Munz did to help me walk again.”

For a high-functioning individual like Southwell, a shattered ankle is a potentially life-changing injury. Dr. Munz follows patients periodically for two years after an accident, then every year moving forward in annual surveillance.

“With this type of injury to the ankle, patients can develop problems down the road,” he says. “I like to keep them in the system and let them know that I care about them. Brian had many other serious injuries, but foot and ankle injuries drive long-term outcomes because the quality of care patients receive and how well they heal determines whether they’ll walk again. Orthopedic injuries have the potential to be the most debilitating. To take a guy in the prime of life with an injury that could cause a lifetime of pain and disability, and put him together so he can return to normal life, is a huge thing for him and for society. For a surgeon, it’s incredibly rewarding.”

Brian Southwell wishes to thank his entire medical team. In addition to Dr. Munz, they were trauma surgeons Michelle McNutt, MD, Joseph Love, DO, Rondel Albarado, MD, Bryan Cotton, MD, MPH, Saleem Khan, MD, John A. Harvin, MD, all of whom are faculty in the Department of Surgery, Division of Acute Care Surgery at McGovern Medical School at UTHealth; and plastic surgeon David Wainwright, MD, in the medical school’s Department of Surgery, Division of Plastic and Reconstructive Surgery.