Car Crash Victim Loses Pulses for Over 30 Minutes and Survives 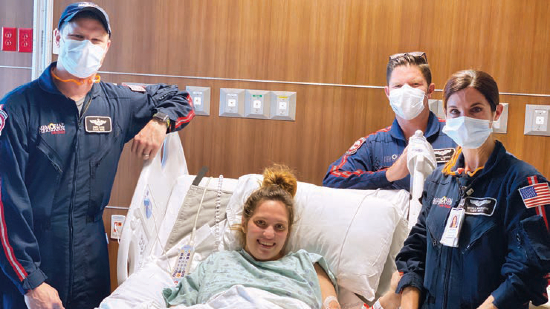 Jackie Figueroa remembers looking up at the stars in the nighttime sky and then falling back to sleep. For hours, she laid on the side of the road, drifting in and out of consciousness. When EMS arrived, the 23-year-old Huntsville woman had an undetectable blood pressure, very little pulse and her body temperature was 81.7 degrees.

"She coded out of nowhere."

At 6:30 a.m., a passerby called 911, and two units from Huntsville Walker County EMS were dispatched, the first of which would ultimately transport the driver to a local hospital. Supervisor Nick Coronis was the first to arrive on the scene and called for Memorial Hermann Life Flight®. Paramedics Melissa Meitzen and Robert Edmonds and trainee Courtney Wolfe were on the second unit.

Overnight, temperatures had dipped into the low 40s. “It took us a while to get baseline vitals on her because she was so cold,” says Meitzen. “We covered her in blankets, put hot packs in her armpits and groin, and began administering warm fluids. When I palpitated her pelvis and abdomen, she sat upright and started screaming. We got her on the backboard, used a blanket to bind her pelvis and waited for Life Flight.

“When Life Flight arrived, they brought their stretcher over, hung blood and we unloaded her. Life Flight nurse Michele Bourgeois, RN, suddenly said, ‘Start CPR.’ The patient had coded, just out of nowhere. We got their chest compression device for them, they loaded her up and my partner and I thought that was the end of it. We didn’t think she would make it.”

“So many things fell into place that day,” says Bourgeois. “Our south base had been dispatched to take that flight. We had been in Huntsville that morning and had flown to The University of Texas Medical Branch (UTMB Health) in Galveston, so we were still coming off of Galveston, and fuel was a bit of an issue. But our pilot, Grant Gibbons, did some quick math and said, ‘Hey, why don’t we just stop at our east base, top off and head up that direction? We can still get their faster than our south can.’”

“When we landed, we were directed to the female patient in the ambulance. She was as white as a sheet and barely responsive, and the only thing I heard her say was, ‘I’m thirsty.’ It was obvious she needed blood. So we immediately started blood transfusing, rebound her pelvis with a more commercial device, gave her medicine to increase her pressure and intubated her. Then we lost pulses.”

During the 30-minute flight to Memorial Hermann-Texas Medical Center, Figueroa never regained pulses. Bourgeois and her partner, Life Flight nurse Chris Oliver, RN, used all of the blood products on board the aircraft—six units in total—then ran out about 2 to 3 minutes before they landed at Memorial Hermann-TMC. “We just kept doing CPR and pumping fluids,” says Bourgeois.

Oliver says it is significant that they didn’t have to use any of their blood products on their prior flight. “If that had not been the case, we wouldn’t have been able to take the call. It is our standard of care to show up to every single call with the full complement of blood, or we’re out of service.”

Resuscitated in the ER; Treated in Trauma OR

Oliver recalls the scene in the hospital’s Emergency Center. “We walked in the ER and one of the physicians in the ER, right before they were about to call it, they’re doing all their double-checks and being really diligent, and she says, ‘Hey, I have a pulse.’ At that point, it was full steam ahead,” says Oliver.

“A lot of trauma centers, if they got the page for a blunt trauma patient with 30 minutes of chest compressions prior to arrival, would have written that patient off,” says Dr. McNutt. “But we don’t.

We give everybody the opportunity. We were very aggressive at our resuscitation strategies because of this scenario right here.”

“The patient had liters of blood in her abdomen, the majority of which was coming from her spleen, a grade 5 shattered spleen. So we rapidly controlled that with our fingers then ligated the bleeding vessels and removed the injured spleen.

“She also had an injury to her liver, which we were able to control surgically, and a retroperitoneal hematoma (hemorrhage). An x-ray shot in the trauma bay revealed a pelvic fracture and evidence of bleeding, so we performed a damage control laparotomy, packing off the bleeding, before continuing resuscitation.

“We also activated what’s called IR STAT, a unique process we developed a few years ago to get our interventional radiology colleagues to the bedside within 30 minutes for bleeding trauma patients. They were able to stop the bleeding from her pelvis by embolizing some of the arteries in her pelvis,” says Dr. McNutt.

"Every single person did their job."

Dr. McNutt summarizes the chain of events and efforts which saved Figueroa’s life. “The prehospital, the EMS, they put a pelvic binder on her, minimizing pelvic bleeding and called Life Flight. Life Flight gave blood products, intubated and ensured high quality chest compressions. There was a Level I trauma activation, so my on call trauma team was gowned and gloved and waiting for her with a cooler full of blood. We did immediate interventions with invasive devices for blood product transfusion and blood pressure monitoring. She had an ultrasound showing blood in her abdomen. She was taken immediately upstairs to the operating room, which was also ready and waiting for us like a level one trauma center should be.”

Jackie Figueroa is alive today because “every single thing went perfect,” Dr. McNutt says. “Patients who are critically injured like this, they survived because everyone that touched them—in the prehospital setting, in the emergency room, in the operating room, orthopedic surgery, trauma surgery, rehabilitation—every single person did their job. That’s what it takes.”

Grateful to be Alive

Figueroa, a mother of two, is still recovering, walking with the aid of a walker, 2 1/2 months later. “I am trying to stay positive,” she says. “God worked through everyone who put their hands on me that day. If it weren’t for Him, I wouldn’t be here. I am a walking miracle.”