Chad Blackburn: On the Upswing 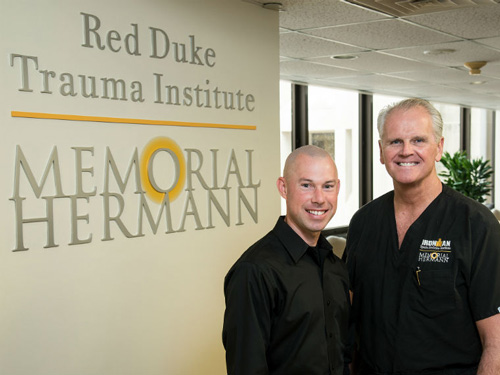 After stopping to assist a motorist on IH-45 south of Houston, 42-year-old law enforcement officer Chad Blackburn was sitting at the wheel of his patrol car, entering the incident report on his dashboard computer. He was parked on the outside lane shoulder, seatbelt on, when a car plowed into his vehicle from behind and traveled through the driver’s side, trapping him in the driver’s seat. The incident occurred at 1:45 a.m. on Labor Day weekend in 2016, when he and officers across Texas were working a DWI task force.

“First responders arrived at the scene very fast, but they couldn’t see me in the vehicle,” Blackburn says. “Another law enforcement officer, a friend of mine, saw my work boot and knew I was still in the car. I was bleeding internally, and the EMS personnel knew time was of the essence.”

Rescuers used the Jaws of Life to pry apart the car and free Blackburn, who was transported to a community hospital in south Houston, where surgeons removed his spleen, stabilized him and arranged for air ambulance transport to the Memorial Hermann Red Duke Trauma Institute at the Texas Medical Center the following morning. His injuries included a broken nose, a fractured vertebra, eight broken ribs, a broken scapula, liver and kidney lacerations, severe damage to his lungs that threatened their function, and pelvic acetabular fractures to the right and left hip sockets.

“It was a full week before Chad woke up,” says his wife, Sherri Blackburn. “During that time Dr. Routt put his pelvis back together.”

Milton “Chip” Routt, MD, an orthopedic trauma specialist at the Red Duke Trauma Institute, is a professor in the Department of Orthopedic Surgery at McGovern Medical School at UTHealth. His areas of expertise include traumatic pelvic ring disruptions and acetabular fractures.

“No matter how routine polytrauma is for our team of traumatologists, it’s always horrible for the patient,” he says. “We don’t see many patients with bilateral acetabular fractures like Chad’s. The right side was a terrible fracture, and to rebuild it we had to use anterior and posterior surgical approaches. We were able to repair the left side through a single incision from the back. So he had three operations in one day – two on the right hip and one on the left. The blast effect of the right-side fracture dislocation injured his sciatic nerve, and at surgery we could see that it was bruised but intact. The nerve began recovering several weeks after surgery.”

After several surgeries during a 23-day hospitalization at Memorial Hermann-Texas Medical Center, Blackburn was admitted to The Crossings, a skilled nursing facility in League City, Texas, near the couple’s home. He remained at the facility for another 56 days.

We’re very thankful for Dr. Routt. He took the time to explain things in terms we understood, and he really listens. He was always hopeful that Chad would go back to doing the things he wanted to do. He put him back together and gave us instructions on how to continue the recovery. What he does is amazing.

Dr. Routt was equally impressed with his patient and his family and friends. “Law enforcement officers do a great job of taking care of their own,” he says. “When one of them is hurt, we see a huge show of force for support. There were so many people in the ICU waiting room that we had to move them to a separate conference room. Chad had a vast, smart, supportive crew of informed people. They were appropriately upset, but at the same time they were remarkably calm. They knew there was a project going on to rebuild a human being and that every part, including theirs, was critical.

“They were also very hospitable,” he adds. “They brought in loads of food and had quite a buffet going on for all of us. There was always an officer standing guard outside his door, not because he wasn’t safe, but as a gesture of respect. They build a very strong support network around their people.”

Ask Blackburn what kept him going through the long hospitalization and recovery and he’ll tell you it was the will to win. “I didn’t want to give up. I have a wonderful wife and family, and I knew I wasn’t doing this alone. God was with me through it all,” he says. “I believed that my body could be fixed, and I had high expectations of myself to get moving and back to work.”

Before his injury, Blackburn and his son, Reese, ran several 5K races a year. During the long hospitalization, Reese ran the 5Ks alone and FaceTimed his father during the runs. “The whole family had this attitude that we weren’t going to give up,” Sherri Blackburn says. “We decided we were going to do what’s normal for us to the degree that we could. It was important to us to keep the right perspective.”

Today Blackburn is back to running 5Ks with his son, although he admits it’s a struggle. “I have to concentrate when I walk, and I have to concentrate even more when I jog,” he says. “There’s a lot of mental work involved, so it’s way more than the physical exertion of walking and jogging.”

The entire family is involved in speaking out against driving while intoxicated. The Blackburns’ daughter, Victoria, produced a public service announcement for her high school about how drunk drivers change lives. “This is now part of our everyday life,” Sherri Blackburn says. “It’s our mission to make people aware that this is no game. It’s serious business. It’s been an enormous disruption in our lives, but we’re focused on using it for the good. These kinds of accidents and injuries are totally preventable.”

Chad Blackburn spoke at a Shattered Dreams presentation at Hardin High School in Hardin, Texas, in May 2017. Shattered Dreams is a two-day, school-based program that promotes responsible decision-making among high school students about underage drinking and impaired driving by showing them how irresponsible choices can end all dreams. He hopes to stay involved with the program. “We’re open to helping in any way we can,” he says.

The family made a long-awaited trip to Walt Disney World in Orlando, Florida, in July 2017 and Blackburn returned to work at the end of that month. “When Chad was in the hospital and wasn’t talking too much, we all told him, ‘You’ve got to get going, because we’re going to Disney World,’” Sherri Blackburn says. “And we’re very thankful that we made it. We believe God has blessed us with great doctors who have done what they do very well. Things are on the upswing for our family. We’re so grateful for where we are now.”