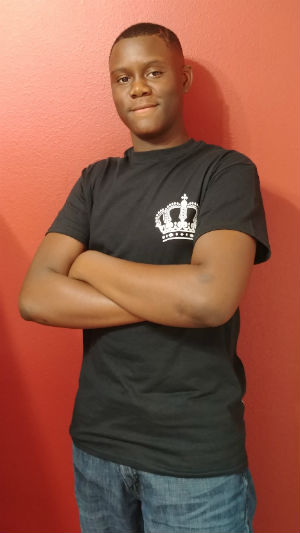 Fourteen-year-old Chadrick, who plays outside linebacker for his school’s football team, struggled with hip soreness and stiffness for months, especially when engaging in physical activities. He took anti-inflammatories and iced his hip, but the pain and stiffness kept coming back. When his father noticed his son was limping and having trouble walking, he insisted they see a specialist. Unbeknownst to them at the time, the next morning Chadrick would undergo emergency surgery at Children’s Memorial Hermann Hospital, dodging a potentially devastating injury.

An X-ray showed that Chadrick was suffering from Slipped Capital Femoral Epiphysis (SCFE), a hip condition that occurs in teens and pre-teens. This condition occurs when the head (ball) of the thigh bone (femur), called the femoral head, slips off the neck of the femur in a backwards direction. A common analogy used to describe the condition is of a scoop of ice cream falling off the top of the ice cream cone. SCFE can be caused by trauma (acute) or can occur over an extended period of time (chronic) and occurs more often in boys than girls.

The specialist explained to Chadrick and his father that without immediate intervention, Chadrick’s condition could worsen, potentially to the point where the femoral head might detach from the femur altogether. Chadrick was provided with crutches and instructed them to go straight to the Emergency Room at Children’s Memorial Hermann Hospital. 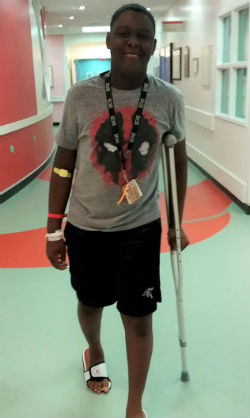 In the ER at Children’s Memorial Hermann Hospital, they met Lindsay Crawford MD, affiliated pediatric orthopedic surgeon with McGovern Medical School at UTHealth, and member of the Hip Preservation Program at Children’s Memorial Hermann Hospital. She explained that Chadrick needed surgery to correct both his right and left hips. “The condition was more prevalent on his left side,” she says, “but it had begun to affect his right side as well. I explained to them that through small incisions, guided by a fluoroscope (a special X-ray machine), I would insert screws into each of his hips, to hold everything together.”

Chadrick’s father recalls how stunned they were to hear the diagnosis, saying, “We had never even heard of this condition. He was playing football and lifting weights. And then we hear he needs emergency surgery? I was shocked.” The processes moved quickly, but Dr. Crawford helped put his mind at ease. “I was panicking, but Dr. Crawford assured me that everything would be fine. She said in 30 to 60 days, I’d have a fully functioning teenager. Her confidence helped ease my tension.”

The next morning, Dr. Crawford performed the procedure, inserting the screws through small incisions into Chadrick’s hips. The procedure went smoothly, and Chadrick was released from Children’s Memorial Hermann Hospital the next day. For the next month and a half, Chadrick used crutches to walk and was prohibited from all contact sports for an additional two months, to allow his body to heal. The following season, he was back on the field, stronger than ever.

Dr. Crawford says Chadrick was lucky his father insisted he get checked out. “So many of these cases go undiagnosed,” says Dr. Crawford. “It’s an orthopedic issue in kids most people are not aware of. If a child experiences hip, thigh or knee pain, stiffness in the hip, or limps on and off, they should be evaluated. This condition needs to be addressed surgically to prevent it from progressing. Even a fall from a standing position can have traumatic consequences.”

Chadrick is thankful for the expert care he received from Dr. Crawford and Children’s Memorial Hermann Hospital. “Dr. Crawford’s amazing, the best,” says Chadrick, who now has his eye on playing college ball.