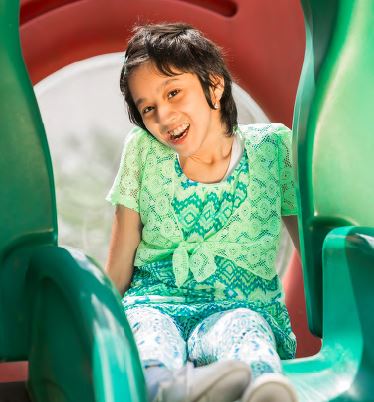 Much of neurology is detective work. Like good sleuthing, successful practice demands profound knowledge, honed investigative skills, persistence and a measure of artistry. In the case of Cristian Serrato, diagnosis and treatment of a challenging disorder required all of these talents and more – the combined expertise of a multidisciplinary team of subspecialists affiliated with Children’s Memorial Hermann Hospital, the Mischer Neuroscience Institute at Memorial Hermann-Texas Medical Center and McGovern Medical School at the University of Texas Health Science Center at Houston (UTHealth).

Born at term, Cristian was a small baby – just 4 pounds, 3 ounces. “From the beginning we had problems, but it was only later that they became serious,” says her mother, Lusi Serrato. “As a baby she never learned to roll over or sit up by herself, so we started home therapy very early. She was almost two when she learned to walk and she took longer than normal to reach her other milestones as well.”

'The More She Grew, The Worse the Symptoms Got'

Until the age of six, Cristian was walking, talking and eating normally. “Then one by one she started losing all the milestones she’d met,” said Guadalupe Serrato, her father. “I have videos of her going to the park, playing on the jungle gym, playing with her friends and then she could no longer do any of those things.”

When Cristian started school, she began to lose her voice, so her parents put her in speech therapy. “Then we noticed she wasn’t walking normally, so she started physical therapy,” her mother said. “And then she had problems with her hand movements, so we added occupational therapy.”

By the time Cristian was seven, she was in therapy sessions five days a week. “The more she grew, the worse the symptoms got,” Lusi Serrato says. “Eventually, she could no longer talk and we thought, ‘How do we communicate with her?’ We learned sign language and got her an iPad. She got very good at it.”

In 2012, Cristian’s pediatrician referred her to Pedro Mancias, MD, a pediatric neurologist whose clinical interests are neuromuscular disorders, electromyography and nerve conduction studies. “Cristian had a history of mild delays in speech and walking, and by the time I saw her she had experienced two years of regression in those abilities,” says

Dr. Mancias, who is the Adriana Blood Professor of Pediatrics at McGovern Medical School. “She also had a known deletion in chromosome 19, but at the time it was discovered, its importance was unknown. We initiated a thorough evaluation including MRI, EMG, metabolic studies, lumbar puncture and a biopsy of muscle and conjunctiva. Cristian has been through a lot in her 13 years of life.”

The results of every test came back negative, but she continued to worsen to the point that her body had twisted into a contracted dystonic state. “We began researching the deletion in chromosome 19 and learned that it’s very close to the gene ATP 1A3, which is associated with two very rare conditions – alternating hemiplegia and rapid onset dystonia-parkinsonism,” Dr. Mancias says. "Another patient we followed for many years presented with alternating hemiplegia. Eventually, through advances in genome sequencing, we discovered she had a deletion on ATP 1A3. Cristian presents with rapid onset dystonia-parkinsonism that we believe is associated with the chromosome 19 deletion, and we’re investigating the genetics further. This is how one patient can help another, and hopefully will help other patients down the road.”

The first goal in the treatment of movement disorders is always medical management, but Cristian had adverse effects that made increasing the prescription to effective doses impossible.

“With almost every follow-up visit to Dr. Mancias, we tried a new drug,” Lusi Serrato says. “He talked to us about deep brain stimulation, but we were trying to avoid putting her through brain surgery. He described it in a way that wasn’t so scary, but we thought this is our child and we’d be opening her brain. I said let’s wait until it’s the last resort. If I had known then what I know now, I wouldn’t have put her through all those years of medications.”

“UT MOVE got involved to determine whether there might be other more beneficial medications and to explore surgical interventions,” Dr. Thakur says. “Cristian’s disease was progressing and affecting all parts of her body. She couldn’t sit in a chair. Her trunk was twisted, her left leg wouldn’t straighten at all and her right leg was always turned when she walked. Her right hand was curled into a tight fist. What we saw was a child who was deteriorating rapidly with a dwindling quality of life. The most remarkable thing was that she was still a happy girl and very resilient.”

Thinking Outside the Box

Cristian was not a typical candidate for deep brain stimulation based on the literature. “As physicians we have to be safe and carefully consider the risk versus the benefit, but ultimately we have to be able to think outside the box,” Dr. Thakur says. “Cristian simply had no other options. A multidisciplinary team came together to consider DBS for her – a bold move in a very rare condition – and made that recommendation to her parents.”

The Serratos agreed to the surgery, which Dr. Fenoy and Dr. Shah performed in late October 2015 with Cristian under general anesthesia. Using MRI and intraoperative CT visualization, the surgical team made two burr holes in her skull and descended microelectrodes into the brain to verify neuronal activity and confirm that they had reached the target areas. Then they placed the DBS leads, test stimulated to check her response, placed extensions from the electrodes to the neurostimulator and implanted it in her chest under the clavicle.

A Long Road Ahead

Cristian started therapy at TIRR Memorial Hermann Outpatient Rehabilitation-Kirby Glen in January. Occupational therapist Carly Thom, OTR, works with her two days a week. “Now that Cristian can open her hands, we’re working on relearning how to use them,” Thom says. “She’s very motivated and excited about everything new we do. She can’t communicate verbally, but that doesn’t stop her from communicating. She’s a unique child.”

As a sixth-grader at Deep Water Junior High School in Deer Park, Texas, Cristian keeps a full morning-to-afternoon schedule. “She uses a wheelchair to get from one place to the next, but when we get there, she usually prefers to sit in a regular chair,” her father says. “Now that she’s beginning to be able to swallow, she has strong preferences in food – macaroni, hot dog mustard only, hamburger mustard only, pizza, no broccoli.”

Coming Out of Her Shell

Cristian’s ability to walk improved after the surgery. “We both have to tell her to slow down because she’s always in a hurry,” Guadalupe Serrato says. “She remembers what she could do when she was six and wants to have it all back. She’s very social and interacts well with other kids and adults. She laughs. She listens. She’s a normal teenage girl trapped inside her body.”

The Serratos had researched rapid onset dystonia-parkinsonism online and found very little information. “Some of these conditions have been studied more in adults than in children, which is the advantage of being treated at a children’s hospital housed within an adult hospital, both of which are teaching hospitals for a medical school,” Dr. Thakur says. “We all work together as a team, but at the same time we maintain our independent thinking processes. That kind of close teamwork is based on the long-term experience of working together and it gives our patients more confidence in treatment decisions.”

Meanwhile, the Serratos are watching their daughter come out of her shell. “She’s always ready to try new things,” Lusi Serrato says. “She likes everyone she meets and greets them with a smile. Here is my daughter, trapped inside this body, and she’s amazing! She inspires me every day. We’ve seen what this surgery has done for Cristian and want others to hear her story.”