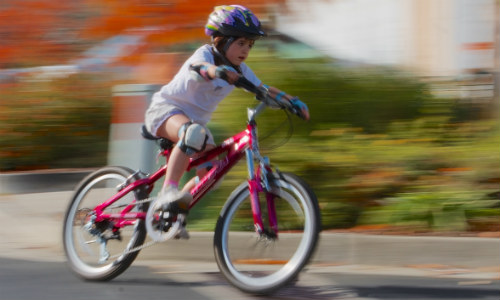 It was Daniel Turya’s eighth birthday and he couldn’t wait to take his new birthday gift from his parents out for a spin. It was a shiny new bike, and even though he didn’t have a helmet, he was just riding right outside of his apartment doorstep with his buddies. Soon after he got on, he accidentally ran into his friend’s bicycle in front of him. His bike flipped, sending Daniel backwards off his own bike, where he hit the back of his head on the concrete. “He ran inside screaming and said it felt like his eyes were on fire,” said Daniel’s mother Loretta. “He had a goose egg-sized bump on the back of his head, but he wasn’t bleeding. We decided to take him to the emergency room anyway just to be on the safe side.”

On the way to his local ER in North Houston, Daniel began vomiting. After receiving a CT scan, the doctors said he had a concussion and released him. “They told us to keep an eye on him and to let him rest,” his mother said, who kept him home from his summer activities the next day because he vomited throughout the night and was lethargic the next morning. “That afternoon he got worse quickly. He couldn’t sit up or keep his eyes open. His pupils were different sizes, and on the way back to the ER, his body started to posture. We were terrified.”

Daniel was rushed to the CT scanner where doctors saw that he had developed an acute subdural hematoma from his accident. It is among the deadliest of head injuries. He was immediately flown via Life Flight® to Children’s Memorial Hermann Hospital in the Texas Medical Center. The expert care team was waiting for him, led by David Sandberg, MD, Director of Pediatric Neurosurgery at University of Texas Health Science Center (UTHealth) at Houston, Children’s Memorial Hermann Hospital and Mischer Neuroscience Institute.

The Best Chance for Survival

“He was unconscious and unresponsive,” said Daniel’s mother. “They told us as he went into surgery that we should prepare to say goodbye.” The internal bleeding from his injury was putting pressure on his brain that was life-threatening, and Dr. Sandberg and the surgical team decided that Daniel’s best chance at survival was for them to perform a craniectomy, where a section of his skull was removed so that his brain could swell until it healed.

“Dr. Sandberg prepared us before the surgery that if Daniel survived, he may never walk or talk again,” said Loretta. “When we finally got to see him after his surgery, he could squeeze our hand. It felt like a miracle. After spending four days in the intensive care unit, we were moved to a regular room and he was able to walk and talk after six days.” Daniel was discharged to a rehabilitation center for two weeks to receive physical and occupational therapy, and then received homebound care until his second surgery to replace the bone in his skull. Now he is back in school, and is expected to make a full recovery.

According to Dr. Sandberg, Daniel’s story is remarkable considering the severity of his condition. “He was comatose upon arrival, and was at death’s door,” he said. “And today, he is a completely functioning and healthy 8-year-old boy. He is a fighter.” Dr. Sandberg expressed the importance of always wearing a helmet, which would have prevented Daniel’s injury altogether.

Although Daniel initially struggled with his short-term memory function, he is doing better every day says his mom, who added that he doesn’t remember the day of his accident or his hospital stay. “He is a little disappointed that he can’t ride his bike right now. And a helmet is definitely in order,” she said. “We will forever be grateful to Dr. Sandberg and everyone at Children’s Memorial Hermann Hospital for saving Daniel’s life.”