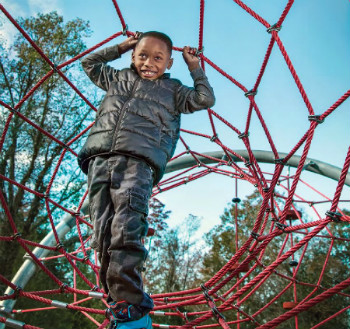 A caring and informed mother, a knowledgeable physical therapist and an expert in the surgical management of spasticity have transformed the life of eight-year-old Darius Sonia.

Born seven weeks early, Darius suffered an intraventricular hemorrhage in the first few days of life – a common occurrence with premature birth. The hemorrhage left him with a single significant deficit: spasticity in the lower limbs.

“Darius has been in therapy since he was three months old,” says his mother Sarah Sonia, who moved to Houston from Shreveport, Louisiana, in 2008, a year after her son’s birth. “In therapy he learned to stretch his muscles and improve his range of motion, but eventually the tightness would come back. When he was about five, I started considering a dorsal rhizotomy, which requires a year of intensive physical therapy following the surgery. But a pre-surgery evaluation showed he had ADHD. We didn’t think he could concentrate well enough to do three or four days a week of hour-long therapy sessions after the surgery.”

Selective dorsal rhizotomy (SDR) is a neurosurgical procedure that selectively destroys problematic nerve roots in the spinal cord and is most often done in children to relieve the symptoms of spastic diplegia or spastic hemiplegia. Performed correctly in the right surgical hands, the procedure provides an immediate, permanent reduction in spasticity and offers children who follow a program of intensive postoperative therapy the potential to walk independently within one to two years.

After the ADHD evaluation, Sonia had reservations about starting her son on medication. “I wasn’t sure about it, but it turned out to be a good decision,” she says. “He took it for two years with good results. In the meantime, we changed therapists and I started reconsidering dorsal rhizotomy.”

The new therapist was Christine Hill, PT. Hill thought Darius would do well with SDR and suggested they ask for a referral to Manish N. Shah, MD, who directs the Texas Comprehensive Spasticity Center at McGovern Medical School, Children’s Memorial Hermann Hospital and the Memorial Hermann Mischer Neuroscience Institute at the Texas Medical Center. Fellowship-trained in pediatric neurosurgery, with special expertise in the surgical management of spasticity and dystonia in children, Dr. Shah is the leading neurosurgeon in the area for selective dorsal rhizotomy and also is an expert in pediatric epilepsy, craniofacial surgery and craniocervical spine surgery. He was recruited from Washington University in St. Louis after completing his fellowship at St. Louis Children’s Hospital under world renowned pediatric neurosurgeon Tae Sung Park, MD.

“We do selective dorsal rhizotomy with a single incision at one to one-and-a-half levels of the spine and cut 75 to 80 percent of the nerve rootlets,” Dr. Shah says. “Most providers use longer incisions and cut only about 30 percent of the rootlets. Evidence shows that this 30 percent rootlet-cutting approach often fails in the long term, with a return of the spasticity. We see such patients with failed rhizotomies and unfortunately, there’s nothing we can do for them surgically. It’s a one-shot procedure. If parents are considering rhizotomy, we strongly encourage them to be evaluated at Children’s Memorial Hermann Hospital in Houston.”

Darius was the perfect candidate for SDR, according to well-established criteria for success: the spasticity was limited to his legs, he had good trunk control and no previous orthopedic procedures, he could tolerate physical and occupational therapy and he had strong family support.

In June 2015, Dr. Shah took Darius to the OR, where he performed a one-level laminectomy and unroofed the spinal canal in the mid-lower back. After exposing the dorsal sensory nerve roots, he divided them into rootlets and tested them one by one, cutting about 75 percent of the most spastic rootlets. The surgery took two and a half hours.

Darius spent 48 hours on bed rest and was up and active immediately afterward. After a four-day stay at Children’s Memorial Hermann Hospital, he was transferred to Shriners Hospital for Children in the Texas Medical Center for inpatient rehabilitation. Therapy began as soon as he was admitted.

“When I went to see Darius to remove the bandage a week and a half after surgery, he was already up roaming the hallway in a wheeled walker,” says Dr. Shah, who is an assistant professor in the division of Pediatric Neurosurgery at McGovern Medical School and director of pediatric spasticity and movement disorder surgery. “What a sweet kid! He’s enthusiastic and adorable and very motivated to walk. We all win the lottery in different ways. He was premature and had the intraventricular hemorrhage, but his mom educated herself about his condition and found excellent therapists. In our experience young patients with a strong desire to succeed and good family support can achieve independent walking.”Darius was released from Shriners Hospital a week earlier than expected.

Now? Karate and Looking to Other Sports

“The surgery was a good decision for him,” his mother says. “He always wanted to participate in some kind of sport but because of his balance problems, I never thought he’d be able to. Now he’s taking karate, doing kicks and punches, and talking about how he wants to play football and be a quarterback. His muscles are getting stronger and he’s doing things he couldn’t do before the surgery.”

Darius turned eight in August 2015. He continues therapy three times a week and sees Dr. Shah every three months in follow-up, which will continue for at least another year.

“We like to follow patients over time as part of their care team so we can continue to help them improve their mobility,” he says. “We’re not the kind of practice that operates on kids and discharges them into the wild. We’re very committed to the long-term welfare of our patients and their families.”