David and Jackie: 34 Years and Counting 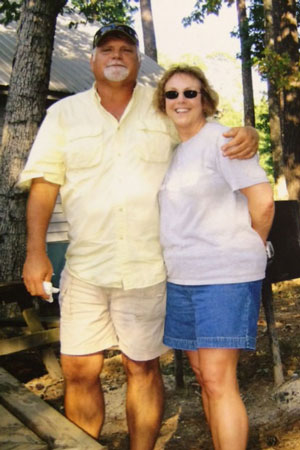 Although the early years of kidney transplantation were marked by high rates of rejection and allograft failure, a clinical trial of the immunosuppressive drug cyclosporine dramatically changed the outlook for transplant recipients. The trial began in 1979, and three years later, David was among the participants who were enrolled at Memorial Hermann-Texas Medical Center. He and his sister Jackie shared their story last October at an educational event for people considering living kidney donation at the hospital’s Transplant Center. David was just 15 when a routine physical exam revealed an abnormally high level of protein in his urine, an early sign of kidney dysfunction. After further testing, he was diagnosed with vesicoureteral reflux, the abnormal flow of urine from the bladder to the upper urinary tract.

“In the process of fixing the bladder problem, they discovered I had only one fully functioning kidney,” says David, who at the time was working in the construction business in Lake Charles, Louisiana. “The other kidney was just a third of the size it should have been.”

Not long afterward, when David wasn’t feeling well, Jackie, a nurse, called a physician friend. “My friend, who was a gastroenterologist, told me to bring David by,” she says. “He did blood work and two days later David was in the hospital on dialysis. He was in end-stage renal failure at the age of 22. We were supposed to go to New Orleans that weekend. If we had gone, he might have died.”

David was on dialysis for three months, but didn’t do well. “I went Monday, Wednesday and Friday and it always took me a day to recover, which meant I had only one good day a week – on Sunday,” he says.

When David’s nephrologist talked about the possibility of kidney transplantation, Jackie said, “Let’s do whatever we can.” The physician, aware of the clinical trial of cyclosporine at Memorial Hermann-TMC in Houston, referred them to the hospital’s Transplant Center.

“David, my sister and I did the pre-transplant lab work and all three of us were a 100 percent match,” she says. “I’m the oldest and was 33 at the time. I was done having my babies, and my sister was five years younger, so I decided it was going to be me.”

Admitted to the hospital in September 1982, David and Jackie were assigned to rooms on different wings. “Once my family left, I thought, ‘Oh, dear God, what have I done.’ I had a five year old and an eight year old at home,” Jackie recalls. “But the staff took excellent care of both of us. It was all good.”

David remembers feeling overwhelmed. “I was more concerned about Jackie donating a kidney than I was about myself,” he says. “Transplantation of a donated kidney wasn’t as common back then as it is now. The future seemed like a big unknown, and I was scared. I wanted to make sure she would be okay. There wasn’t really anyone you could talk to about their personal experience as a donor because they hadn’t been doing it that long. There was no track record of long-term success like there is today, and I was in a clinical trial of a new drug, so it was experimental.”

A high fever after the transplant kept David in the hospital for two weeks, but neither has had any problems since that time. David went back to his job in construction and resumed his regular schedule of running. “I was on steroids, and with the combination of running and medication my knees started hurting,” he says. “About a year and a half after the transplant, the doctor said, ‘Let’s try to take you off steroids and see if cyclosporine will be enough.’ It was.”

David went on with his life, got married and had two children. He and his wife now have two grandchildren.

“It’s been a real success story,” he says. “Things have happened in life that I never thought would happen. We didn’t know how long the transplant would last because there was no long track record of success. We’ve been very fortunate.

“When Jackie gave me her kidney, it was a gift I could never repay,” he says. “We’re very happy to share our story whenever we can. It’s really encouraging for people to hear that you’re going on 34 years and that both of you have normal lives.”

“To this day, David still tells me I gave him a life,” Jackie says. “We get very emotional about it.”