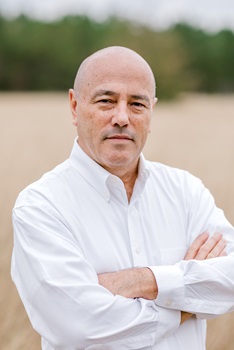 In the beginning, Don Pannell exhibited no obvious signs of prostate cancer. He had no issues with urination. No pain. And no family history of the disease. But Pannell, then 50, was tired. “I felt sluggish and lacked energy,” he recalls. “I just didn’t feel like my old self.”

During the drug therapy, Dr. Kent monitored Pannell’s prostate-specific antigen (PSA) levels. PSA is a protein produced by both normal and malignant cells of the prostate gland. A PSA test measures the PSA levels in a man’s blood. Abnormally high PSA levels can indicate the presence of prostate cancer.

“At one of my checkups, Dr. Kent told me that while my PSA level was in the normal range, he was seeing a rate of change that concerned him,” says Pannell. Dr. Kent performed a prostate biopsy, the results of which were inconclusive. Still concerned, Dr. Kent ordered an MRI of Pannell’s prostate, which revealed two lesions. In December 2015, Dr. Kent performed a second, MRI-guided biopsy targeting the areas of concern. The diagnosis was low-risk prostate cancer.

Over the next 2 years, Pannell was under active surveillance, monitored by his physicians in a structured program of care. At a scheduled biopsy in December 2017, his Gleason score changed from 6 to 7, elevating his cancer from low to intermediate risk. The Gleason scoring system is the most common prostate cancer grading system used. A score of 6 is considered a low-grade cancer, predicted to grow more slowly and be less likely to spread than a higher-scoring cancer.

A score of 7 is considered a medium grade cancer. Dr. Kent consulted with urologist Paul Smith, MD, a colleague who specializes in minimally invasive robotic prostate surgery at Memorial Hermann Memorial City and Memorial Hermann Katy. “Don was young and in good health,” says Dr. Smith. “With an intermediate-risk prostate cancer, he was an excellent candidate for a minimally invasive robotic prostatectomy technique I utilize, which combines a nerve-sparing approach and a detrusor apron sparing hood (DASH) technique. It is much less destructive than traditional surgery and preserves continence. Put simply, it lets me keep everything as undisturbed as possible while removing the prostate. Patients typically go home the next day and recover their urinary and erectile functioning relatively quickly.”

In February 2018, Dr. Smith performed the DASH robotic prostatectomy on Pannell at Memorial Hermann Katy. “My anxiety was through the roof,” recalls Pannell. “But from the first time I saw Dr. Smith, I was immediately impressed with him. He explained things in a way I could understand. He knew what he was doing. And on the day of my surgery, he came and sat with me and asked if I had any questions or concerns. He just connected with me.”

The procedure was a success, and Pannell recovered quickly. As Dr. Smith explains, “Don was dry 1 month after surgery. He never wore (incontinence) pads. Within a year of his surgery, he was off of erectile dysfunction medication. And most important, 2 and a half years later, he still has undetectable PSAs. It’s the trifecta of prostate surgery: He’s got good cancer control, good urinary control and good sexual function. He has really been a model patient.”

Pannell is pleased, too. “It’s so important to get annual prostate screenings. Early detection allowed my surgeon to use a nerve-sparing procedure that has allowed me to maintain my quality of life,” he says. “If you’ve got cancer, you want a gifted surgeon like Dr. Smith, who has the ability to perform this procedure, which has immense implications for life after surgery.”