A Double Diagnosis of Brain and Lung Cancer

Natascha Odom thought she might be coming down with COVID-19 when she began having trouble finding the right words. The 49-year-old fourth grade math teacher at Hubenak Elementary School in Richmond told a colleague who took her to see the school nurse. When Odom told the nurse that the current president of the United States was George Washington, the nurse told her that she should see a doctor.

The next day, Odom was in her primary care doctor’s office, where she couldn’t draw the face of a clock. Abhilash Davlapur, MD, a primary care sports medicine physician with Memorial Hermann Medical Group (MHMG), scheduled her that same day for an MRI and a CT scan, after consulting with Krishanthan “Krish” Vigneswaran, MD, a neurosurgeon with UTHealth Neurosciences and clinical assistant professor in the Vivian L. Smith Department of Neurosurgery at McGovern Medical School at The University of Texas Health Science Center at Houston (UTHealth).

Dr. Davlapur called Odom the next day with her results: she had a large mass on the frontal lobe of her brain, a smaller mass on the back of her brain and a tumor in her lung.

“I thought, ‘How in the world can this be happening?’” Odom recalled thinking, while speaking to Dr. Davlapur. “My mom had lung cancer and had smoked 25 years earlier, but I was not a smoker and had no symptoms prior to losing my words.”

Dr. Davlapur referred Odom to Dr. Vigneswaran, who saw her in his office two days later to discuss the available options for treating the brain tumor.

After reviewing her MRI and CT scan results and examining Odom, Dr. Vigneswaran admitted her right away to Memorial Hermann Southwest Hospital to have brain surgery the next day.

The mother of a 17-year-old son and a 14-year-old daughter and the stepmother to a 30-year-old stepdaughter, Odom remained positive, and her husband told the family that she was a fighter.

“I knew I needed to get this taken care of, so I prayed about it,” she said.

To prepare her for the brain surgery – a minimally invasive left frontal craniotomy, Odom underwent a pre-operative navigation MRI to help Dr. Vigneswaran plan her surgery. This high-resolution MRI helps identify critical areas of the brain and serves as a real-time GPS for Dr. Vigneswaran as he uses Memorial Hermann’s software-guided system to assist him while performing the surgery. The nursing staff carefully braided Odom’s hair so that a small, linear incision could be used without shaving a large part of her scalp. The surgery lasted under 2 hours and allowed Dr. Vigneswaran to remove the entire tumor.

“We removed the tumor from the frontal lobe of Ms. Odom’s brain and kept it intact so the pathologist could submit the tissue for next-generation sequencing to determine the genetic makeup of the tumor,” he said. “This helps the oncologist determine the best treatment for her lung tumor.”

Her brain tumor turned out to be cancerous and had spread from the tumor in her lung, but it was determined by the genetic sequencing that it was not related to smoking. Instead, it was a genetic mutation, likely inherited from her mother.

After her brain surgery, Odom remained in the hospital for one night in the dedicated Neuroscience Intensive Care Unit, where craniotomy patients are monitored post-operatively, and was cleared to leave the hospital after working with physical therapy. During this short time, Odom noticed the gradual improvement in her cognition and restoration of her hand function, which she had lost just after her diagnosis. 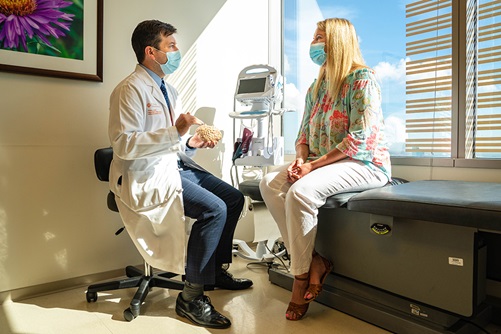 “I had no pain and was ready to go home 2 days later,” she said. With the large brain tumor gone, Dr. Vigneswaran collaborated with Mark Amsbaugh, MD, a radiation oncologist with UTHealth Neurosciences and clinical assistant professor at McGovern Medical School, on the best way to treat Odom’s remaining small tumor on the back of her brain. For that, Dr. Amsbaugh performed radiosurgery using the Leksell Gamma Knife®, which successfully shrunk the smaller tumor.

Meanwhile, Odom also began receiving care from Kathy Sam, MD, an oncologist affiliated with Memorial Hermann. Based on the genetic sequencing of the tumor removed from Odom’s brain, Dr. Sam prescribed a targeted chemotherapy pill that would not only treat the lung tumor, but also any residual cancer cells that may have remained in the brain.

“This specialized regional care that Ms. Odom received at Memorial Hermann Southwest was really key in this case,” Dr. Vigneswaran said. “A primary care doctor doesn’t normally have the ear of a neurosurgeon and would likely have sent the patient to the Emergency Center or referred her to a neurosurgeon, where an appointment can take time to be scheduled. In this case, though, the collaboration among all Ms. Odom’s doctors gave her the type of care she would get in a tertiary medical center, but closer to her home and her family with optimum coordination of care. Her primary care physician remained at the helm while working with specialists.”

“I feel great, even with the chemo that I have to take for 3 months,” Odom said, acknowledging that her journey may not be over.

She remains positive about her prognosis, as do her doctors, and she’s grateful to each of them.

“They have been very supportive and honest, and they genuinely care about me. I am thankful to each one for giving me my life back,” she said.