Dylan Pugh: In the Best Hands 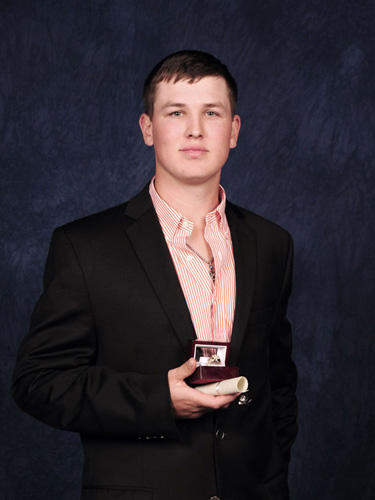 Dylan Pugh remembers working that day, coming home and going out again to meet friends. On the drive home later that night, he swerved to avoid an oncoming car and his one-ton Chevy Silverado Duramax left the road, hit a ditch, went airborne and slammed into a tree. The crash occurred on Sept. 29, 2016, on a farm-to-market road in Huntsville, Texas, where the 21-year-old had just started his senior year at Sam Houston State University (SHSU). His friends were behind him in another vehicle; they called 911 and their parents.

Pugh’s mother, Angela McBee, got the call at her home in Madisonville, a two-and-a-half-hour drive from Houston, where her son was transported by Memorial Hermann Life Flight®. She alerted her ex-husband, Dennis Pugh, and the two arrived at the Red Duke Trauma Institute located at Memorial Hermann-Texas Medical Center (TMC) at about the same time.

She remembers the drive as “long and pretty tough. When we got there, they took us back to see Dylan. He was unconscious, intubated and on a ventilator,” she says. “We go in and see our baby lying there on the table for a CT scan. Seeing that was nothing I’d wish on anyone, ever. At the same time, we knew he was right where he needed to be. Things went like clockwork, and the staff was incredible. They told us about the surgery Dylan would have and that Dr. Chip Routt would be doing it. One doctor said, ‘If this happened to me, he’s the man I’d want to have do the surgery.’ So I Googled him, and knew right away that Dylan was in the best hands.”

Milton “Chip” Routt, MD, is a professor in the Department of Orthopedic Surgery at McGovern Medical School at UTHealth. His areas of expertise include traumatic pelvic ring disruptions and acetabular fractures. He is internationally recognized for pioneering safe percutaneous pelvic fixation techniques, improving surgical care for complex acetabular fractures and advancing surgical safety.

“Dylan had a severe traumatic pelvic ring injury with fractures in both hip sockets and his right sacrum,” Dr. Routt says. “The sacral fracture extended into the joint where the sacrum articulates with the lower lumbar spine. This was a significant injury.”

To repair it, he made small incisions and placed strong screws to stabilize the fractured areas while they healed. He describes it as “a minimally invasive, maximally beneficial surgery.”

After Pugh’s discharge from Memorial Hermann-TMC, he was transferred to TIRR Memorial Hermann-The Woodlands for a three-week inpatient rehabilitation stay. He was released at the end of October and started in the hospital’s outpatient Challenge Program two days later. The program helps traumatic brain injury survivors maximize their potential by addressing the physical abilities, memory strategies, interpersonal communication and problem-solving skills they need for long-term success.

At the time of the accident, Pugh was three weeks into the fall semester of his senior year. An accomplished team roper who won “a good bit of money” through the U.S. Team Roping Championship, he entered SHSU in 2014 on a rodeo scholarship. He’ll graduate with a major in agricultural business and a minor in agricultural engineering in December 2017. His recovery complete, he’s also back to riding and roping.

“Dylan has made an excellent and remarkable recovery,” Dr. Routt says. “He had a very severe set of injuries and a challenging hill to climb in order to recover. He’s a strong-willed and physically strong young man, and those qualities have helped him a lot. He also has an extremely supportive family that was fantastic to work with. They asked all the right questions and were on board with the plan.”

“At the beginning, the trauma team told us that Dylan’s injuries were serious and cautioned us against letting our hopes get too high,” McBee says. “But, he kept hitting milestone after milestone in his recovery and surpassed everyone’s expectations. It’s all due to the grace of God, the skill of the surgeons and the incredible care he received. And he’s also pretty tough.”