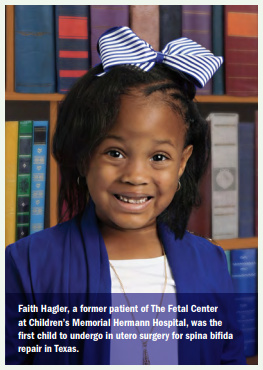 Picture the bounciest, bubbliest five-year-old you can imagine. Her songs and dance moves come straight from Beyoncé. She loves bright colors and runs to the mirror to check every outfit. Her goal is to be a superstar. And she is a child who was born with spina bifida, one whose immediate future appeared more filled with shunts, catheters and leg braces than mirrors and dancing.

Faith’s medical team would become the first in Texas to perform in utero surgery for spina bifida repair. A complex and sometimes permanently disabling birth defect that affects about 1 in every 1,500 pregnancies, spina bifida involves incomplete development of a portion of the spinal cord and associated nerves, as well as the surrounding spinal bones and overlying muscle. Infants born with spina bifida are at risk for a range of disorders, including hydrocephalus, which may require a shunt to relieve pressure inside the skull. They are prone to life-threatening infections and may suffer loss of sensation or paralysis, difficulty walking and other problems that lead to lifelong disability.

In 2011, fetal surgeon KuoJen Tsao, MD, and pediatric neurosurgeon Stephen Fletcher, DO, were following the results of a landmark trial, the Management of Myelomeningocele Study (MOMS), which found that if a fetus undergoes surgery in utero to repair the spina bifida defect, serious complications could be reversed or lessened when compared to infants who underwent repair after birth. The study found that fetal surgery decreased the need for shunting for the infants, and nearly half were able to walk without crutches by the age of 30 months.

Faith’s parents, Ivan and Colette Hagler of Dallas, were referred to The Fetal Center at Children’s Memorial Hermann Hospital and McGovern Medical School at UTHealth, and based on the MOMS trial protocols, Dr. Tsao determined that Colette was an ideal candidate for the procedure.

After the fetal surgery, she remained at Children’s Memorial Hermann Hospital and delivered Faith eight weeks later on the Fourth of July, a date that Colette describes as “so symbolic” of the independence her daughter has achieved since her birth. Patient Story Faith Hagler, a former patient of The Fetal Center at Children’s Memorial Hermann Hospital, was the first child to undergo in utero surgery for spina bifida repair in Texas. Since Faith was the first patient to undergo this surgery in Texas, her parents faced challenges finding a team to provide care in Dallas at that time. Her first year was difficult, her mother says, with several bouts of a respiratory virus common among preemies, but when the medical team determined that no shunt or catheterization was necessary, “we began to see the benefits that the clinical trials indicated, even though there were no guarantees,” Colette says.

Dr. Tsao no longer treats Faith, but sees the family when he’s in Dallas or when they come to Houston. “He helped us in so many ways,” her husband says. “He’s an uncommon and special person. I’m so grateful he watched over my family during the time she was in Houston.”

“When I see her,” her mother says, “I see faith – the substance of things hoped for. She’s definitely the evidence of things not seen in the amazing things she has been able to do in the past five years.”

At 11 months, Faith began crawling, and at 21 months, she was taking her first steps. It was a memorable moment. Ivan Hagler confesses that while shooting videos of his daughter, he was trying hard not to cry. His immediate thought was to “thank God who blessed us by letting our little girl walk.” Today, he’s still making videos. “You never know when she’ll break out dancing. She is not shy,” he says. “We prayed for her to be a vibrant child, and we got what we asked for.”

According to Dr. Tsao, Faith has demonstrated exactly what the MOMS trial showed the in utero surgery was designed to do. Now in kindergarten, Faith has met all the milestones for her age: She speaks in full sentences. She can write her first name. She can identify shapes and knows her numbers from 1 to 20. “Cognitively and linguistically, she’s right on track,” he says. “Much of her follow-up medical care now focuses on keeping an eye on things through her growth and development.”

In early June 2016, Faith asked her parents whether she could be baptized. The rite was held the day before her fifth birthday, a significant milestone for the family. Like the independence implicit in her birth date, there’s providence in Faith’s name as well. “When I see her,” her mother says, “I see faith – the substance of things hoped for. She’s definitely the evidence of things not seen in the amazing things she has been able to do in the past five years.”