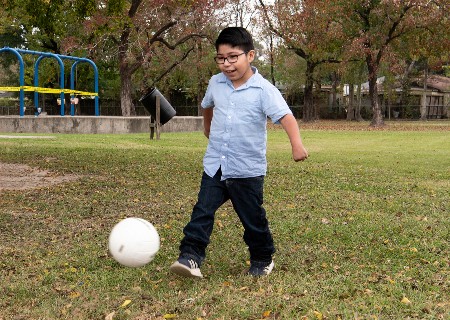 Eight-year-old David Martinez is finally free of the intravenous (IV) tube through which he has received essential nourishment since birth. His team of physicians at McGovern Medical School at The University of Texas Health Science Center at Houston (UTHealth) and Children’s Memorial Hermann Hospital understands that while the surgery to remove the tube was small, saying goodbye to the tube was a huge milestone in David’s life.

David and his twin brother, Luis, were born prematurely at Lyndon B. Johnson Hospital in Houston on December 19, 2011. Born at 30 weeks gestation, David weighed 1 pound, 12 ounces, and Luis weighed 2 pounds, 13 ounces. Both boys were transferred to the neonatal intensive care unit (NICU) at Children’s Memorial Hermann Hospital in the Texas Medical Center, where Luis stayed for 4 months and David for 6 months.

Shortly after birth, David developed necrotizing enterocolitis (NEC), severe inflammation of the intestines that can lead to intestinal tissue damage. According to the NEC Society, NEC is the most common cause of death in very premature infants after two weeks of age. The cause is unknown, and there is no cure. Mild forms can be treated medically; more severe forms require surgical removal of the destroyed portions of the intestine.

Placed in the Care of the STAR Team

David and Luis were placed under the care of pediatric gastroenterologist Essam Imseis, MD, an associate professor in the Department of Pediatrics at McGovern Medical School who is affiliated with Children’s Memorial Hermann Hospital. Dr. Imseis, along with pediatric surgeon Allison Speer, MD, an assistant professor in the Department of Pediatric Surgery at McGovern Medical School who is also affiliated with Children’s Memorial Hermann Hospital, leads the Short Bowel Syndrome Therapy and Rehabilitation (STAR) Program at Children’s Memorial Hermann Hospital. Since 2011, the multidisciplinary STAR team, which includes pediatric nurses, nurse practitioners, pharmacists, dieticians, neonatologists, a hepatologist and a transplant hepatologist, has been providing inpatient and outpatient care for children with intestinal failure.

During his stay in the NICU, David underwent multiple surgeries to resect, or remove, diseased intestine, leaving only 6 inches of healthy intestine (versus an expected 46 inches based on his gestational age, weight and height). As a result, he developed a condition known as short bowel syndrome (SBS) in which the body is unable to absorb enough nutrients from consumed foods due to the lack of a functioning small intestine. A catheter, or thin tube was inserted into David’s vein to facilitate administration of total parenteral nutrition (TPN), a method of feeding that bypasses the gastrointestinal tract.

David was discharged home at 6 months of age, and for the next 8 years, his IV nutrition bag was his constant companion. In addition to IV feeding, he received supplemental nutrition via a gastrostomy tube (G-tube) inserted into his stomach. Twice a month, David was seen by Dr. Imseis at UT Physicians Pediatric Specialists located in the Texas Medical Center for visits to help manage his nutrition and growth and minimize problems that often affect children with SBS. Despite receiving good care at home, David was hospitalized multiple times for IV line infections, once for 15 days. “Through interventions introduced by the STAR team, we were able to report 75 percent fewer infections in these children. But even with the best care, patients on TPN are at a high risk for infections,” says Dr. Imseis.

While David was getting good nutrition through TPN, both physicians say IV nutrition is not an ideal permanent solution. "While use of TPN has led to improved outcomes in children with SBS, its use can lead to liver failure," says Dr. Imseis. “Some of these children may go on to need a liver and an intestinal transplant, but outcomes with transplant are not ideal, with only a 42 percent survival rate at 10 years," says Dr. Imseis, who is also a transplant hepatologist.

Dr. Speer adds that “due to recurrent infections, mechanical problems or blood clots at the IV catheter vein sites, the patient may eventually run out of veins. Every time you place a catheter, you risk losing a vein site. And if you run out of vein sites, your only alternative is an intestinal transplant.”

Dr. Speer says a primary goal of programs like the STAR program is to rehabilitate patients’ intestines and help them achieve “enteral autonomy”—independence from parenteral nutrition and/or the need for intestinal transplantation.

For many children there is hope. “Many kids will grow out of this,” says Dr. Speer. “As kids grow, so do their intestines. Fortunately, less than 5 percent require an intestinal transplant.”

A Huge Step Towards His Vision 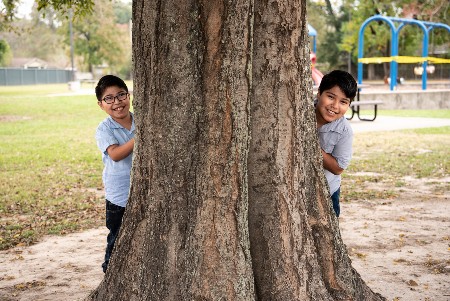 A turning point for David was the introduction of a new drug called GATTEX® (teduglutide), a daily injection which helps the intestine absorb more nutrients. “David was the first pediatric patient to be put on GATTEX at Memorial Hermann after it was FDA approved for use in children in 2019,” says Dr. Imseis. “The weight gain he was able to achieve on GATTEX allowed him to wean completely off of his IV feeding and to significantly scale back his G-tube feeding.”

David’s mom, Sara Milian, says David is enjoying his newfound freedom. “He can now swim, shower or take a bath without worrying about his line,” she says. "And he’s eating his favorite foods—two eggs, sunny side up, chicken nuggets and fries.”

She says David recently told her he has a vision of waking up and being just like his brother, a kid who doesn’t rely on any sort of supplemental nutrition. Saying ‘so long’ to his IV nutrition tube was a huge step in that direction.

To learn more about the STAR program or to schedule an appointment with a pediatric gastroenterologist or surgeon, click here or call (713) 222-CARE.