Amy Sager was 20 weeks pregnant with her second child when, during a routine ultrasound, she found out she was carrying a boy. But for Sager and her husband, Kevin, what should have been a joyous moment soon gave way to concern. The baby’s heart, the obstetrician informed them, was pushed to the right side of his body, and his stomach was in his chest. The couple stared at the ultrasound image in disbelief and, finally, asked the question: Will our baby live? 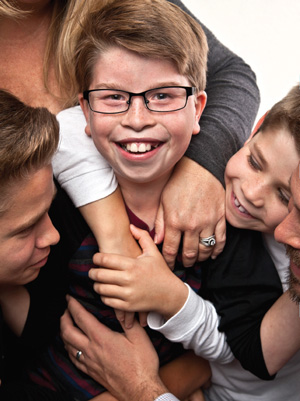 After running multiple tests, the doctors discovered that the unborn infant was suffering from a left-sided congenital diaphragmatic hernia (CDH), a hole formed in the baby’s diaphragm inutero that causes the intestines and abdominal organs to migrate into the chest cavity. The crowded area then restricts the lungs from developing properly, making it difficult to breathe. “We were told to stay off the Internet while I was pregnant because of all of the horror stories, but we continued to research everything about CDH to mentally prepare ourselves for what could happen,” Sager remembers. “We were told there was a 50/50 chance of survival, which was really difficult to hear.”

CDH affects 1 in every 2,500 babies; about a third of cases are fatal. The cause is not entirely known, but the condition is believed to be genetic. While learning about it, the Sagers started searching for the best doctor, who could both deliver their baby boy and map out an effective plan for the best possible course of treatment after his birth. They soon found Dr. Kevin Lally, surgeon in-chief at Children’s Memorial Hermann Hospital and chairman of pediatric surgery at McGovern Medical School at UTHealth.

Children’s Memorial Hermann Hospital is one of only two hospitals in Houston offering pediatric extracorporeal membrane oxygenation (ECMO), a treatment used for newborns and children who are critically ill with respiratory failure.

Dr. Lally is recognized for being one of the world’s leading specialists in CDH. His multidisciplinary team helped the couple not only understand the disorder, but also the delivery process and what to expect during the first few months of the baby’s life. “We needed facts, we needed to know what was going to happen and what it was going to look like,” Sager says.

“Dr. Lally was honest the entire time and so responsive; we were prepared as much as we could be going into delivery.” On December 19, 2005, at 37 weeks, Sager underwent a C-section, and her son Gavin was born. He let out a small cry, which his mom instantly knew was a good sign. As the couple had known would be necessary, immediately after Gavin was born, the doctors took him away to perform an intubation—an emergency procedure that entails inserting a plastic tube into the trachea to assist with breathing. Sager remembers feeling alone, unable to hold her newborn son.

“My husband rushed to go be by his side so one of us could be with Gavin, which was our plan from the start, and every so often he would come back to bring me videos,” she says. After close to 12 hours, Gavin stopped responding to routine treatments. At that point, Dr. Lally and his team made the decision to place the infant on extracorporeal membrane oxygenation (ECMO), a temporary heart-lung bypass machine that helps put oxygen in the bloodstream and pumps blood to the entire body—the last step before surgery. “He was so sick, he couldn’t live without the extra support,” Dr. Lally recalls.

Congenital diaphragmatic hernia, a hole formed in a baby’s diaphragm inutero, affects 1 in every 2,500 babies.

Sager and her husband would spend days by Gavin’s bedside, still unable to hold him because of the ECMO tubes attached to his neck. While doctors had believed it would be weeks before Gavin’s lungs would be strong enough for surgery, the newborn defied expectations, and was cleared for the procedure at three days old. The surgery took place while Gavin was still on ECMO. Dr. Lally made a large incision below his rib cage and pulled his spleen, liver and stomach out of his chest and into their rightful places, allowing his heart to move back to the left side of his body. He then used a synthetic patch to place the missing part of the diaphragm back together and close the hole in Gavin’s abdomen. The surgery was a success. As he recovered, Gavin remained under close watch of a team of neonatologists in the neonatal intensive care unit. After seven days, he was permanently removed from ECMO and placed on a feeding tube—two weeks sooner than the hospital had predicted. 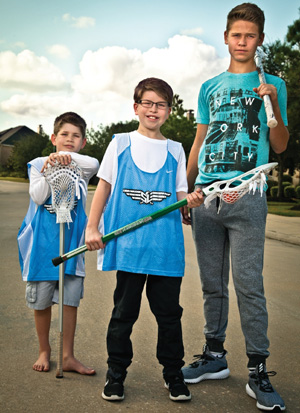 Finally, the long-awaited moment arrived: The Sagers were able to hold their son. “It’s nothing I’ve experienced,” Sager says, holding back tears. “He suddenly became this miracle child over-night. Every time they would set some sort of goal on how long the process was going to be, he would beat it.”

In January 2006, Gavin was finally released from the hospital, and went home to be with his older brother Harrison. Although in the beginning, he was still connected to a feeding tube, he no longer needed it after a week, nor was he required to use an oxygen tank, as doctors had originally predicted. Each step, both the Sagers and Dr. Lally remember as a huge accomplishment.

“Usually, babies recovering from CDH tend to be in the hospital a lot longer than a month, depending on how severe the defect is,” Dr. Lally explains. “Some kids are even placed on a couple medications if their lung problem is serious. But Gavin didn’t need any of that.” Still, CDH patients face a list of challenges, Dr. Lally adds, including growth and developmental delays, increased chances of scoliosis and asthma, and the possibility that the hernia may reoccur as the patch pulls away over time. Gavin suffered from acid reflux after his feeding tube was removed, but could eat normally after three or four months. He went from having multiple checkups per year to visiting Dr. Lally once a year; at 6, he visited the doctor for the last time.

Today, Gavin is a healthy 11-year-old fourth grader who plays lacrosse and loves rollerblading. He’s required to get X-rays every five years to check on his hernia. Sager says that while her son was late learning some of his motor skills—including crawling, walking and riding bikes— he’s since continued to hit all of his milestones. “He’s all caught up, and it’s like it didn’t exist,” says Sager. “If it weren’t for the scars, pictures, and occasional doctor visits, he would have no idea.” Sager says she and her husband, who have since had a third child, are forever grateful for Dr. Lally and the Children’s Memorial Hermann Hospital team, whom they credit with giving their son a normal life. The doctors, they say, helped them during the hardest time of their lives. “For such a terrible experience, they made it so much better for us than we could have imagined,” Sager says. “They’re such a big piece of what helped Gavin get through everything so fast. He wouldn’t be here without them.”