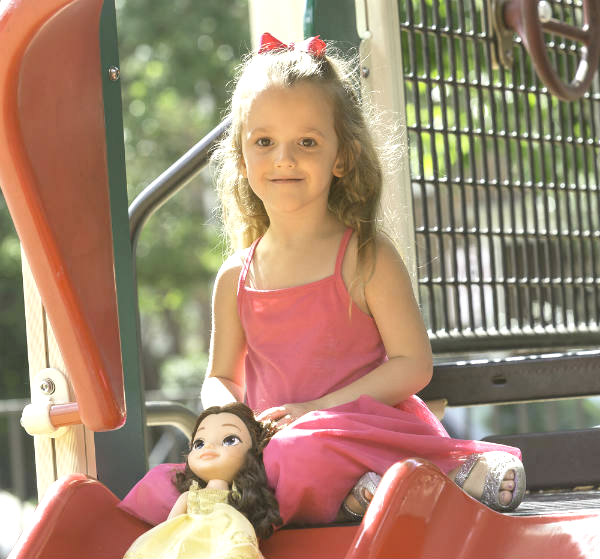 Harper Lowery was born prematurely at 29 weeks 6 days, the larger of fraternal twins. A cranial ultrasound performed at 10 days of life revealed a bilateral intraventricular hemorrhage. With blood clots blocking the flow of cerebrospinal fluid (CSF), Harper’s head began to enlarge to accommodate the buildup, an indication of hydrocephalus.

Spinal taps relieved some of the pressure on the ventricles, and on Christmas Eve of 2012, she was transferred to Children’s Memorial Hermann Hospital, where pediatric neurosurgeon Stephen Fletcher, DO, implanted an Ommaya reservoir for aspiration of CSF as a temporizing solution.

“We were hoping the ventricular taps would buy her some time to grow,” says Harper’s mother, Kendall Lowery. “After we learned she had hydrocephalus, we did our research and decided on an endoscopic third ventriculostomy rather than the traditional surgery to place a shunt. We believe strongly in taking advantage of any cutting-edge medical procedure to help our child.”

In late January 2013, when Harper was a month and a half old, pediatric neurosurgeon David Sandberg, MD, FAANS, FACS, FAAP, performed an endoscopic third ventriculostomy and choroid plexus cauterization (ETV-CPC). Using a neuroendoscope with fiberoptic technology to visualize small and difficult-to-reach surgical areas, Dr. Sandberg created an opening in the floor of the third ventricle, allowing the CSF to bypass the obstruction and flow around the surface of the brain for resorption. He also performed a septostomy, allowing the two sides of the brain to communicate. In addition, he cauterized the choroid plexus, which produces most of the CSF in the brain, in order to reduce CSF production.

“At most centers, most infants would have received a shunt,” says Dr. Sandberg, who holds the Dr. Marnie Rose Professorship in Pediatric Neurosurgery at McGovern Medical School at UTHealth and is director of pediatric neurosurgery at Children’s Memorial Hermann Hospital, Mischer Neuroscience Institute at Memorial Hermann-Texas Medical Center and the medical school. “While shunts are simple to place, they frequently malfunction. Within the first year of placement there’s a 30 percent to 45 percent failure rate and a 4 percent failure rate every year afterwards for the rest of the child’s life. As a result, some children with shunts require numerous surgeries throughout their childhood. Shunts also have a higher infection rate than endoscopic procedures. The best way to avoid shunt complications is to avoid placing a shunt whenever possible, and that is exactly what we try to do by offering endoscopic procedures.”

Harper bounced back quickly and came home in early February after a two-month NICU stay. “We were told that the soft spot on her head would bulge as a first indicator of failure of the ETV procedure, so for the first year of her life, I felt her head probably 100 times a day,” Lowery admits. “We did routine MRIs, and she progressed well. The nice thing about having twins is that her brother, Landon, gave us a good marker for Harper’s development.”

Four years have passed since the surgery, and Harper has not required any additional surgeries for hydrocephalus. Her parents are very pleased with the result of the endoscopic procedure and how the rationale for it was explained to them.

“It is so vital for parents to be really involved in the care of their children,” Kendall Lowery says. “Not one thing was done that I didn’t ask questions about and made sure I understood. And Dr. Sandberg explained everything to us. He’s the most amazing doctor I’ve known in my life – a great surgeon and a great, great person.”

Hydrocephalus is not uncommon; some estimates report that 1 to 2 of every 1,000 infants are born with the disorder. Since Harper’s surgery, Lowery has gotten to know two other families who have kids with hydrocephalus. “I’ve advised them not to shy away from the ETV procedure just because there is not a 100 percent guarantee of success,” she says. “You definitely want the best surgeons, which we had, but you’ve also got to have a lot of faith. If you can give your child a chance to live without a shunt, do it. I go to bed every night thankful that we made that choice.” Harper turned four last December.

“She’s developing well and doing beautifully,” says Dr. Sandberg, who sees her annually in follow-up. “It’s such a thrill to watch her talking normally and running around the office. Physicians at many centers are reluctant to do endoscopic neurosurgery on babies. We can offer that benefit. When the procedure works, it’s a home run for kids and their families.”