Almost 4 years after her daughter, Sutton, was born, Joymesha Jones recalls her pregnancy, along with its challenges, like it was yesterday. As a 35-year-old expectant mother, her first and second trimesters flew by right on track. She knew about the potential risks due to her weight, but other than a little spotting in the first few weeks, her pregnancy was going great. After changing doctors due to insurance coverage, she found Gerilynn Vine, MD, an OB/GYN specialist affiliated with Memorial Hermann. 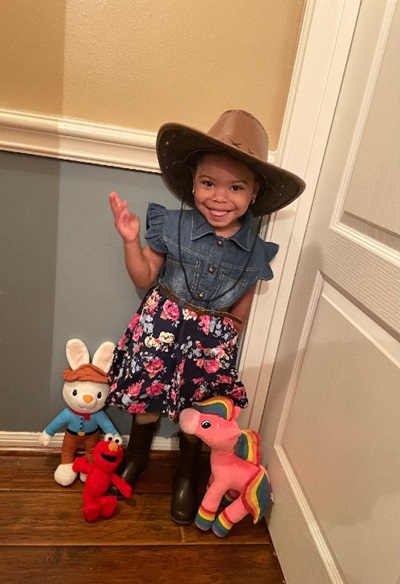 “I saw Dr. Vine for the first time at 24 weeks,” said Joymesha. “Everything was fine at that time. She told me that in my next appointment, we were going to do a screening for gestational diabetes. At 28 weeks, my doctor took my blood pressure, and it was dangerously high, and I failed my glucose tolerance test.”

According to March of Dimes, in the United States, 7 out of every 100 pregnant women – only 7% – develop gestational diabetes. Women who are African American, Native American, Asian, Hispanic or Pacific Islander, are more likely than other women to have gestational diabetes. Due to facts like these, doctors and staff at Memorial Hermann take strict precautions for high-risk pregnancies.

“I was told that I had preeclampsia, ordered to go on mandatory bed rest, told to take my blood pressure daily and told that I would be delivering my baby at 37 weeks,” said Joymesha.

The next day Joymesha went back for the full 3-hour glucose tolerance test, but before they could administer it, she was admitted to the Women’s Center at Children’s Memorial Hermann Hospital – a Level IV maternal facility – with severe preeclampsia. The doctors found protein in her urine. Dr. Vine admitted Joymesha into the Labor and Delivery Unit. Doctors were also concerned the baby had not developed enough to live outside the womb. So, they gave her an Antenatal Betamethasone shot to speed up lung development in baby Sutton in case they needed to deliver her at 28 weeks.

Dr. Vine told me, “You're leaving my office, and you're going straight to the hospital. You’re not going to the car or going to stop and get something to eat. You are going straight from here to there, and they are going to take care of you. I need you to understand the severity of this. If they can't get your blood pressure under control, you will be having the baby today.”

Joymesha was in the hospital for 3 weeks. During this time, doctors monitored Joymesha every day… until one day the nurses noticed something concerning. She was one day shy of hitting 32 weeks. The doctor told Joymesha they would need to deliver her baby that night.

On December 2, 2018, Sutton was born via C-section weighing 2lbs 14oz and 15 inches long.  She was in the Level IV NICU for 9 weeks. Her doctors told Joymesha just how close they were to losing both her and the baby.

“My doctor told me that when they opened me up, they realized that my condition was more severe than what they originally thought,” said Joymesha. “The placenta had started separating from my body. If they had not taken her when they did, it was a possibility they would have lost both of us.”
According to the Centers for Disease Control and Prevention, approximately 700 women die each year in the U.S. as a result of pregnancy or delivery complications. Black women in the U.S. are three to five times more likely than white women to die from pregnancy-related complications, and more than twice as likely to experience severe maternal morbidity (SMM), a term that refers to serious pregnancy complications that can arise from health issues that begin before and during pregnancy.

Joymesha credits the nurses, staff and doctors who helped her, and her baby survive.

“Thank you to the antepartum staff for taking care of me,” said Joymesha. “I felt like I was a part of their family. The labor and delivery nurses, the recovery nurses, the NICU staff… they are family and I love them all. I wouldn't be here if it wasn't for them.”

Each year, Memorial Hermann cares for more than 25,000 laboring mothers from every ethnic, economic and racial background. With SMM on the rise, Memorial Hermann is involved in several initiatives like TEXAS AIM, the March of Dimes and the Memorial Hermann Maternal Equity, Diversity and Inclusion Council to help care for these patients of color who deal with SMM at higher rates.
“Everybody is talking about it, but not everybody is acting on it,” said Kendra Folh, program director for Memorial Hermann Women’s and Children’s Service Line. “In addition to our own innovative programs, we continuously collaborate with a multitude of national and local partners focused on decreasing maternal morbidity, with an emphasis on women of color and their babies. We are also taking great strides in engaging with our maternal patients and their families, developing systems dedicated to ensuring all women receive needed care and support before, during and after delivery.”

Joymesha is grateful she and Sutton got the care they needed at Memorial Hermann. Today, Sutton who is almost 4 years old, loves to play and learn like any other toddler her age. She brandishes a wide smile while saying her A-B-C’s and 1-2-3’s. She is just learning to write her name on paper and trying her hand at sports, from soccer to dance. These everyday normalcies are special to her mother, Joymesha, especially considering the challenging way Sutton came into this world -- and how close she came to losing her.

In recognition of Black Maternal Health Week, learn more about what Memorial Hermann is doing to eliminate racial and ethnic disparity and to end maternal morbidity.