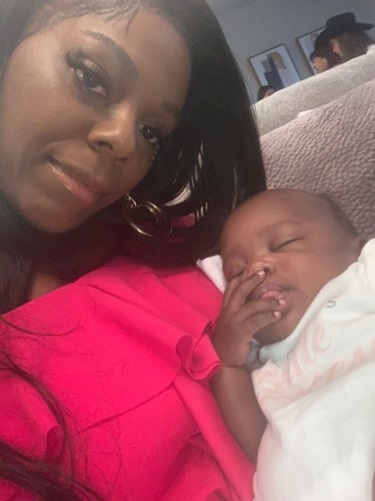 During Black Maternal Health Week, we want to spotlight Ronnie Fisher, who despite several challenges throughout her pregnancy, had a safe delivery and recently welcomed a beautiful baby girl into this world. According to the Centers for Disease Control and Prevention (CDC), black women are 3 to 5 times more likely than white women to die from pregnancy-related complications, and more than twice as likely to experience severe maternal morbidity. Clinical teams and affiliated physicians at Memorial Hermann Health System are dedicated to improving outcomes through several initiatives that have been implemented throughout the system.

Ronnie never imagined she would become pregnant at 39. Three years ago, she underwent endometrial ablation to remove the lining of the uterus to alleviate her unusually heavy periods since she had no plans to have more children. The procedure stopped her periods completely.

“I wasn’t trying to have another baby,” said Ronnie. “I was already a 39-year-old mother of two beautiful daughters, ages 11 and 22. But last fall, I felt something wasn’t right with my body. I was trying to get back into shape, but I couldn’t get my stomach to stay flat. For that reason, I bought an at-home pregnancy test. Moments later, the test showed that I was pregnant. I was completely speechless. I was told it was rare to get pregnant after endometrial ablation. If I got pregnant, it could end up in a miscarriage because the lining of my uterus had been ablated.”

When Ronnie saw her OB/GYN 2 days later, not only did her doctor confirm that she was pregnant, but she had more surprising news – Ronnie was 5 months pregnant!

“I couldn’t believe I was that pregnant,” said Ronnie. “Since I was over 35, my OB/GYN referred me to Dr. Eleazar Soto, a maternal-fetal medicine specialist at Memorial Hermann Memorial City Medical Center who treats high-risk pregnancies. I was at high risk because of my prior endometrial ablation, high blood pressure, and my weight. Because of these factors, I was nervous about this pregnancy, but I knew God gave me this baby for a reason.” Dr. Soto serves as assistant professor in the Department of Obstetrics, Gynecology and Reproductive Sciences at McGovern Medical School at UTHealth Houston.

Ronnie had many complications that increased her risk of excessive bleeding during pregnancy and delivery. She had placenta previa, a condition in which her baby’s placenta covered her cervix and vasa previa, where fetal blood vessels cross or run near the opening of the uterus. If the membranes near the fetus ruptured, it could cause massive bleeding for her and her baby. She also had placenta accreta, where the baby’s placenta grows too deeply into the uterine wall.

“Ronnie’s pregnancy was unique because of all the complications,” said Dr. Soto. “At her ultrasound appointment, I made sure to explain everything in detail and due to these concerns, we watched her very closely so we could properly plan for her delivery.”

“On Sept. 12, 2021, when I was 24 weeks along, my water broke,” said Ronnie. “I was admitted to the Women’s Center at Children’s Memorial Hermann Hospital – a Level IV maternal facility – in the Texas Medical Center on that same day and put on bedrest until Laila arrived. The plan was to keep my baby in for as long as possible. I was given medication for my baby’s lungs to develop in case she was born too early, MRIs to check the placenta previa and blood flow, and when my blood pressure got too low, my nurses stopped my BP medication but monitored my blood pressure daily. They gave me IV medications which helped stop my contractions for a while.”

At 29 weeks’ gestation, on Oct. 19, Laila was ready to make her appearance and was born via C-section. Ronnie had to have a hysterectomy due to the complications that developed during her pregnancy. Laila was immediately transferred to the Level IV NICU at Children’s Memorial Hermann Hospital to be monitored and treated.

“After 2 months in the NICU, Laila is a healthy baby,” said Ronnie. “The NICU team took great care of her, and I had a knowledgeable maternal-fetal medicine care team who helped me through my pregnancy. My nurses were always there to listen to me when I needed to vent and made sure I had everything I needed and more. I was given leg massagers to prevent leg cramps and a bed cushion to keep my bed soft since they knew I’d be here for a while until my baby was born. I had a great experience.” 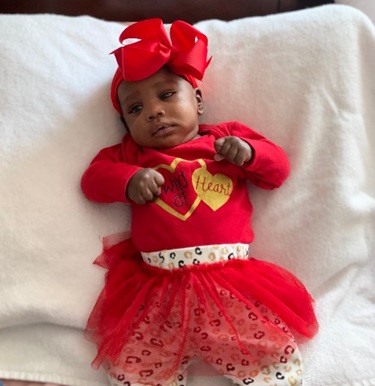 Today, Ronnie and her 5-month-old daughter Laila are doing well.

According to the CDC, approximately 700 women die each year in the United States because of pregnancy or delivery complications and in 2020 black women were most disproportionately affected by this mortality rate. Black Maternal Health Week is a week of awareness, activism, and community-building aimed at amplifying the voices of Black mothers and bringing visibility to Black-led maternal health initiatives.

“Since severe maternal morbidity is on the rise and poses a health risk to both mother and baby, we know that addressing the problem at the time of labor and delivery is not the answer,” said Vicki Regan, MD, vice president of Memorial Hermann’s Women’s and Children’s Service Line. “With complicated pregnancies like Ronnie’s, it is important that we are collaborating with other organizations and staying on top of best practices to make sure we can improve outcomes and get our moms safely to delivery.”

Memorial Hermann Health System is involved in several initiatives like TEXAS AIM, a program used by hospitals and communities across the country to improve maternal safety through implementing best practices, and the March of Dimes to help care for patients of color who deal with these issues at higher rates.

In April 2021, the Memorial Hermann Maternal Equity, Diversity and Inclusion Council was formed to fully understand the severe maternal morbidity problem and to identify and address the morbidities that lead to pregnancy complications in these laboring mothers and to reduce or eliminate racial and ethnic disparities to their care.

In recognition of Black Maternal Health Week, learn more about what Memorial Hermann is doing to eliminate racial and ethnic disparity and to end maternal morbidity.