Rasheed Alshammari had been on the waiting list for a heart transplant at a California hospital for over a year. When the surgeon who was to perform the transplant left the hospital, Rasheed was removed from the list. Rasheed and his parents, Fawziah and Fawaz Saud Alshammari, who had left their home in Saudi Arabia a year and a half earlier to get treatment for Rasheed, were forced to start over, and Rasheed’s health was rapidly deteriorating.

“I was praying for a doctor to heal my son’s heart,” says Fawziah. 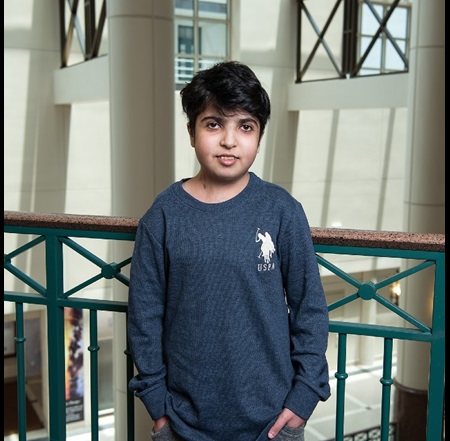 A physician in the Health Office of the Embassy of Saudi Arabia in Washington, D.C., put out a notice to hospitals across the U.S., searching for a hospital to perform the transplant.

The first one to respond was the Children’s Heart Institute1, affiliated with McGovern Medical School at UTHealth and Children’s Memorial Hermann Hospital.

Salam Waqialla, Manager of Hospital Operations in the International Services Department at Memorial Hermann-Texas Medical Center, fielded the call. “Upon reviewing Rasheed’s medical information, our medical team believed that they could perform the transplant surgery, and likely with a relatively short wait,” says Waqialla. “But I also explained that we might have an alternative for Rasheed—an innovative procedure called a biventricular conversion, being performed by only a small number of surgeons around the world, including pediatric heart surgeon Jorge Salazar, MD, at Children’s Memorial Hermann Hospital, that would enable Rasheed to keep his heart and avoid a transplant altogether.”

Dr. Salazar is professor and chief of the Division of Pediatric and Congenital Heart Surgery at McGovern Medical School at The University of Texas Health Science Center at Houston (UTHealth Houston) and co-director of the Children’s Heart Institute. Based on information provided by the doctor, the Institute’s team, led by Dr. Salazar, determined that Rasheed was indeed a candidate for the biventricular conversion procedure – an approach that aims to rearrange the connections of a child’s heart, converting a heart with a single functional pumping chamber, or ventricle, into a normal, two-ventricle arrangement.

Prior Surgeries for Hypoplastic Left Heart

“Rasheed was born with a condition called hypoplastic left heart,” explains Dr. Salazar. “Whereas the normal heart has four chambers: two upper chambers, called atria, which receive blood into the heart, and two lower chambers, called ventricles, which pump blood out of the heart. Babies born with hypoplastic left heart have only one functioning ventricle.”

When Rasheed was born, doctors explained to his parents that he would require a series of surgeries, called the Fontan palliation sequence, but even then he would likely need one or more heart transplants during his lifetime.

“While the Fontan sequence is commonly accepted as the standard of care for hypoplastic left heart, these children are not assured a length or quality of life,” says pediatric cardiologist Avichal Aggarwal, MD, associate professor and chief of pediatric heart failure at McGovern Medical School. “Often, they experience heart failure requiring a heart transplant while they’re still young.”

Rasheed underwent multiple surgeries in Saudi Arabia, including placement of a shunt, the Glenn procedure and, when he was 6 years old, the Fontan procedure. “When he came to the United States for a transplant, he had been struggling with a failing Fontan physiology with protein losing enteropathy, a disease of the intestinal system, for almost 10 years. He was unable to eat or digest food, so he was receiving nutrition via a feeding tube,” says Dr. Aggarwal.

Waqialla says that while Rasheed’s parents were very surprised and excited to learn of this new procedure, they were understandably cautious at first. “When we suggested that they fly to Houston to meet with Dr. Salazar and the team at the Institute, Rasheed’s mom said she first wanted to speak with Dr. Salazar on the phone,” he recalls. “As soon as they spoke, she said they were going to get to Houston right away.”

“It’s difficult to explain the feeling I felt when I heard that Rasheed didn’t need a transplant,” says Fawziah. “All the joy I felt. I started to cry. I felt we were truly blessed by God.”

Rasheed was moved, too. “When the doctor from the Embassy told us about this alternative, Rasheed got off the hospital bed and hugged me,” says Fawziah.

The day the family arrived in Houston, physicians at the Institute began preparing Rasheed for the surgery. “For a child to be a good candidate for the surgery, the left-side structures of the heart have to be big enough to support the blood flow to the body,” says Dr. Salazar. “We assessed Rasheed using echocardiogram, MRI and heart catheterization to prove ahead of time that his heart was in fact big enough.”

‘Excellent, From Top to Bottom’

Fawziah says the family’s experience at Children’s Memorial Hermann Hospital was “excellent, from top to bottom. Even as a foreign lady, I felt very welcome. Everyone, including the heart doctors, the gastroenterologists, physical therapists and the hospital staff and nurses, did a wonderful job. When I left Rasheed for short periods of time, I was more than 100 percent sure my son was OK. The nurses took better care of Rasheed than I could have.”

She also has kind words for the physicians who cared for her son. “Drs. Salazar and Aggarwal were with us the whole way. They were very in tune to a mother’s and a father’s feelings. Dr. Aggarwal could tell if I was stressed out, and he would offer very comforting words. I think of him as a father figure to my son. He was very disarming.”