A successful cleft lip surgery gives an entire family a reason to grin. 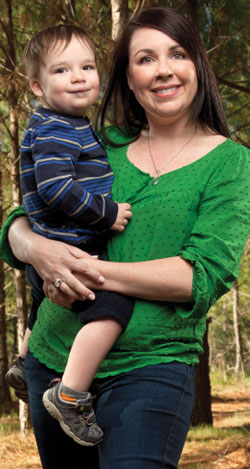 On April 21, 2014, Leah Yeglin gave birth to her son, Jacob. Moments later, she began to sense something was wrong – and soon learned her intuition was right. A nurse informed her that Jacob had a cleft lip but, thankfully, was otherwise healthy. “It was a shock,” Yeglin remembers. “I thought that was a problem in third world countries.”

Cleft lips and palates are the result of a genetic disorder that affects only about one in every 700 children in the U.S., according to Dr. John Teichgraeber, a pediatric plastic surgeon affiliated with Children’s Memorial Hermann Hospital and the Director of the Division of Pediatric Plastic and Reconstructive Surgery at McGovern Medical School at UTHealth. Thanks to improvements in 3D ultrasound, Dr. Teichgraeber estimates 80 to 90 percent of cleft lip and palate cases are diagnosed in utero. While the condition is not life-threatening, it does cause complications, and “the visual problem of a cleft lip can be devastating to parents,” he explains.

Yeglin, who lost her eye to cancer when she was 2 years old, well understands the stigma that can come with being different. Still, she emphasizes that Jacob’s cleft lip was more than just a cosmetic issue. “In those early days, life was really tough,” Yeglin recalls. “We had such a struggle getting him to eat.” Jacob could not breastfeed, and each bottle-feeding took more than an hour.

Two-thirds of all clefts occur in males.

Knowing Jacob – like all children born with a cleft—would need multiple surgeries to correct the condition, Yeglin researched several hospitals, but was introduced to “Dr. T,” as she calls him, and his team at Children’s Memorial Hermann Hospital through another mother on a Facebook support group. “I came with a list of 100 questions, and he took the time to answer each and every one of them,” Yeglin says of Dr. Teichgraeber. “He’s very warm and comforting in his approach.”

Children with cleft lips and palates require multiple surgeries to correct problems that can range from repairs of the cleft lip and palate to issues with jawbones, teeth and even noses. Most will require additional procedures throughout the course of their young lives and into their teenage years. “It can be an average of seven surgeries over the course of a child’s lifetime,” Dr. Teichgraeber explains. The first surgery typically takes place around 3 to 4 months of age; Jacob had his first at 4 months, and Yeglin noticed an immediate difference in her son. “After his surgery, he took his first bottle and sucked it down in no time,” she says.

Not everything has been that immediate. At nineteen months old – the time of our interview with his mom – Jacob has delayed speech, as the condition makes it more difficult to form words most of us take for granted. He said his first word late and still has command of fewer words than typical children at his age.

Speech problems represent the most common side effects of a cleft lip or palate, and can last years or, in about 10 to 15 percent of children, a lifetime. Some of these children even need additional surgery on their palates sees a speech therapist twice a week to address the issue.

It’s hard to be sure because Jacob’s so little, yet Yeglin is confident her son’s speech delay will diminish in time. And while there are more surgeries in store for him, particularly to correct dental issues caused by his condition, his cleft lip has already improved markedly.

Cleft lip can be diagnosed during pregnancy by a routine ultrasound.

Dr. Teichgraeber’s concern for patients like Jacob – and consideration for issues they may face later in life – is what Yeglin believes makes him and his team unique. “They went so far above and beyond,” she says. “Dr. T worries about the emotional side of it, which is incredible to me.”

And the care Children’s Memorial Hermann Hospital has provided has extended well beyond the doctor’s office. Not long after Jacob’s surgery, Yeglin was browsing through a cleft children’s support group on Facebook when she read about a San Antonio mother organizing a fun run to raise money and awareness for the condition. “I wrote the words that will forever define this run: ‘I wish there was something like this in Houston,’” says Yeglin.

Within weeks, she and another mom who lived near her home in The Woodlands began planning what they thought would be a small event, mostly for family, friends and supporters. But when she took Jacob in for a checkup, she mentioned the idea to Children’s Memorial Hermann Hospital staff, and they immediately offered their support and help. “With that support,” Yeglin remembers thinking, “this might be a bigger deal.”

The first annual Cleft Smiles 5K Family Run and Walk, which took place in March 2015, was a huge success, raising $30,000. Yeglin was so busy organizing the event she wasn’t even able to participate. “I was running around, but not doing laps,” she laughs.

This year’s run took place February 27 at Rob Fleming Park in The Woodlands.