Janie Totten: Against All Odds 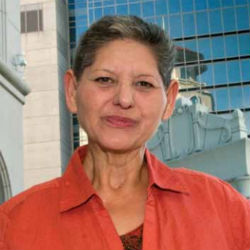 As a three-year survivor of glioblastoma multiforme (GBM), Janie Totten has defied the odds. “I was determined that I wasn’t going to let this cancer beat me,” says the 60-year-old Houston resident. After my surgery, I did exercises at home with my arms and fingers and got stronger and stronger. I decided I was going to walk and do everything I did before I was diagnosed with brain cancer, but at a slower pace. I always kept a positive attitude, and I had a lot of support from my husband, my son Christopher and my daughter Caroline – and lots of prayers. I knew everyone cared.”

Totten’s positive attitude and strong will to live are just two of the many factors contributing to her longterm survival, says fellowship-trained affiliated neurologist and neuro-oncologist Jay-Jiguang Zhu, MD, PhD, who managed Totten’s care since he joined the Mischer Neuroscience Institute in September 2010. “The median survival for patients with GBM is 14.6 months after diagnosis,” Dr. Zhu says. “Mrs. Totten has done well because she has many things going for her – her age, the type of tumor resection and the skill with which it was performed, as well as her physical and emotional strength. She had no significant disability following removal of the tumor. She tolerated radiation and chemotherapy well, and she had a good support system at home. Because she was treated at Mischer Neuroscience Institute, she had the benefit of the multidisciplinary resources of our weekly Neuro-Oncology Tumor Board at which neurosurgeons, radiation oncologists, neuroradiologists and neuropathologists discuss cases to ensure the best treatment.”

Totten presented at the Emergency Center of Memorial Hermann Northeast Hospital in September 2008, with numbness in her legs following a seizure. When a CT scan revealed a brain mass, she was referred to medical team at the Mischer Neuroscience Institute at Memorial Hermann-Texas Medical Center. There, the medical team performed a total resection of the GBM, following motor function mapping done by Mischer Neuroscience Institute neurosurgeon Nitin Tandon, MD, to maximize tumor removal while minimizing the possibility of motor deficit after surgery.

In late October 2008, Totten started a six-week course of radiation therapy and chemotherapy with oral temozolomide. By January 2009, she was receiving a maintenance dose of temozolomide five days out of every 28. She continued chemotherapy until mid-October 2010, during which time she was followed regularly with blood work and MRI studies.

“The standard for administration of temozolomide in GBM patients is six months,” says Dr. Zhu, who is an associate professor in the department of Neurosurgery and the department of Neurology at the UTHealth Medical School. “Mrs. Totten was able to tolerate her chemotherapy regimen for a year and a half without significant side effects, which contributed to her outcome. She was doing well, with the exception of episodic seizures about once every two months. Balancing the benefit and potential side effects of long-term use of temozolomide, we discussed stopping chemotherapy.”

After discontinuing the temozolomide, Dr. Zhu followed Totten every two months with MRI and physical examination; her MRI results were reviewed at the weekly meetings of the MNI Brain Tumor Board. When a lesion was discovered on an MRI study done in May 2011, she underwent stereotactic radiosurgery at Memorial Hermann-Texas Medical Center. The procedure was performed by radiation oncologist Clive Shkedy, MD, using the Institute’s Leksell Gamma Knife® Perfexion™. As the most technologically advanced Gamma Knife model available, the Perfexion allows for the treatment of a broader range of anatomical structures than earlier Gamma Knife models. It also improves treatment planning and patient comfort, and reduces treatment time.

“By using the Gamma Knife, we can destroy most of the tumor,” says Dr. Zhu. “Moving forward, we’ll follow her closely and plan to use the angiogenesis inhibitor bevacizumab if there’s any evidence of tumor growth.”

Totten and her husband, George, have kept a journal after she began treatment in 2008. “Writing things down has helped us keep track of doctors’ appointments, treatments and progress,” she says. “When you have the kind of surgery I had and undergo chemotherapy for as long as I did, it’s hard to remember things, so the journal has been very useful. But the most important thing is to keep a positive attitude. Always stay strong, and never give up.”