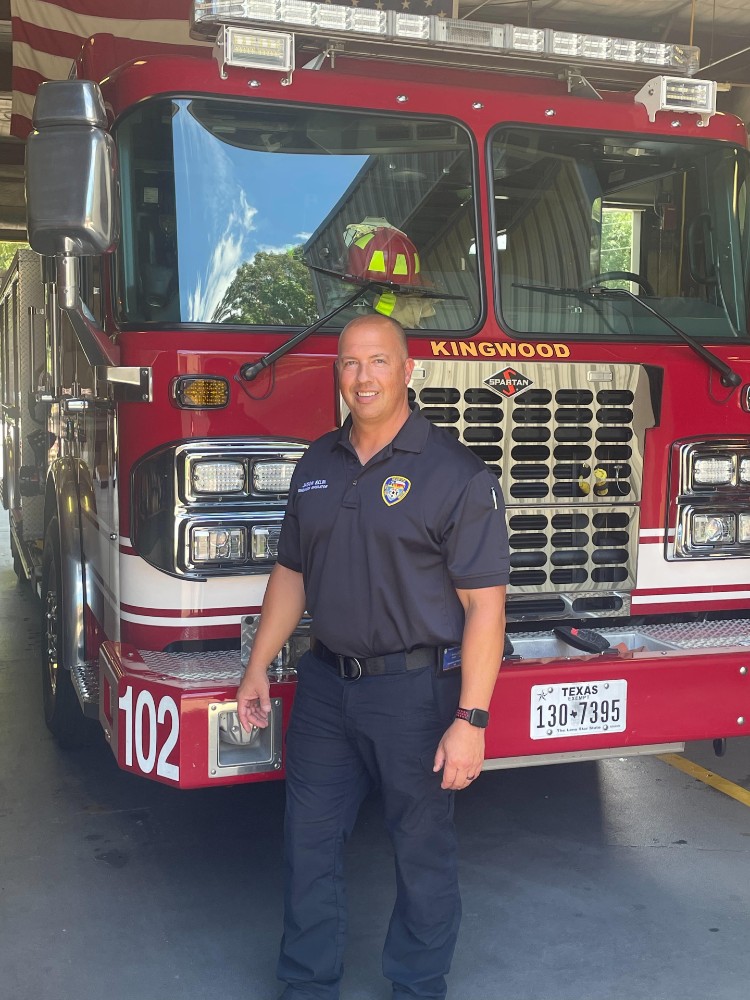 Jason Belin faces dangerous situations regularly. The 45-year-old Pearland resident works as a firefighter for the Houston Fire Department at Station 102 in Kingwood. But during a training session in June at the Department’s Fire Academy, Belin experienced something scarier than the situations he usually faces on the job.

“I had a ‘déjà vu’ sensation while sitting in the classroom, felt dizzy, laid my head on the desk and, according to my chief, passed out,” Belin recalled. “When I came to, I was sweating and nauseous but could remember everything that happened up until I passed out.”

He had not been doing any strenuous activity prior to this episode — the training was all classroom work. Nevertheless, with their emergency training, his co-workers knew he needed medical attention and called 911.

Belin was taken to Memorial Hermann Southeast Hospital by ambulance, and during the brief ride, he experienced two more similar episodes. An EKG revealed his heart rate plummeted from a normal range of 60 to 100 beats per minute to between 20 and 30 beats per minute in a matter of seconds.

“Mr. Belin had experienced a similar episode about five years prior to this, which was diagnosed as a seizure,” said Mary Lim-Fung, DO, an assistant professor of cardiac electrophysiology at UTHealth Houston Heart & Vascular and a clinical cardiac electrophysiologist affiliated with Memorial Hermann Southeast. “With his EKG results this time, though, we quickly diagnosed him with a sinus node dysfunction in which the sinoatrial (SA) node, located in the right atrium, or right upper chamber of the heart, fails to appropriately pace heartbeats.”

Dr. Lim-Fung explained to Belin and his wife that this type of “short circuit” in the heart’s electrical system requires a pacemaker to initiate a heartbeat when the heart rate drops dramatically. A traditional pacemaker, which is surgically implanted in the chest just under the superficial fat layer of the skin, has pacing leads that go through the vein and attach to the heart. This type of device would require Belin to give up his physically demanding career, as he would face a weight-bearing limit. Fortunately, Dr. Lim-Fung offered him an alternative – a leadless pacemaker.

“Mr. Belin was a great candidate for this different type of pacemaker, which is implanted directly into the ventricle, or bottom chamber of the heart, and activates when the heart rate slows down below a set threshold,” Dr. Lim-Fung said. “Since his episodes occurred only sporadically, and because he wanted no restrictions for his career, this device was ideal.”

Dr. Lim-Fung said this type of device is also ideal for patients who may have a high risk of infection, among other conditions. There are still certain conditions that prevent the use of this device, though, she explained.

While still in the ICU at Memorial Hermann Southeast, Belin, a father of two college-aged sons, let Dr. Lim-Fung know he wanted to receive the leadless pacemaker.

The next day, he went to the cardiac catheterization lab at Memorial Hermann Southeast, and while he was under general anesthesia, Dr. Lim-Fung inserted the bullet-sized device into a catheter that was threaded to his heart through his femoral vein, accessed with a small incision to his groin area. Using X-ray imaging to guide the pacemaker to the right ventricle, Dr. Lim-Fung then attached one end of the pacemaker to the inner wall of the heart muscle to hold it in place.

“The procedure takes about 90 minutes to complete, and patients generally leave the hospital the next day with a two- to three-day restriction on rigorous activity,” Dr. Lim-Fung said. “They also come to the office two weeks after the procedure to have their device checked, using what look like EKG stickers placed on the chest to read the device’s function.”

“After the procedure, I had to lie flat for about four hours,” recalled Belin. “I also had soreness in my groin and some minor oozing and bleeding from the wound. Once they double-checked that the pacemaker was working properly the next day, I got to go home.”

Belin was thankful he had no activity restrictions after the first few days, and now, he doesn’t worry about having any more of those episodes.

In December, his pacemaker will need to be checked again in the doctor’s office, and then, it’ll be checked yearly. But he won’t have to worry about it again until the battery begins to weaken, which can take up to 15 years, especially since his episodes are so infrequent. At that time, he’ll require another procedure to retrieve the pacemaker and implant a new one.

“I feel great,” he said. “I would tell anyone considering this to do it. I have no restrictions. I don’t have a scar. The recovery was easy. I don’t want to go through anymore of those episodes. I thought I would die. It was scary, but now I have this reassurance.”

If you have questions regarding the Memorial Hermann Heart & Vascular Institute, our cardiologists, or treatment facilities, please use our contact form below or call (713) 222-2273 for more information.

Thank you for contacting the Memorial Hermann Heart & Vascular Institute. We have received your inquiry, and a team member will contact you soon.