Jim Hyndman: No Guts, No Glory 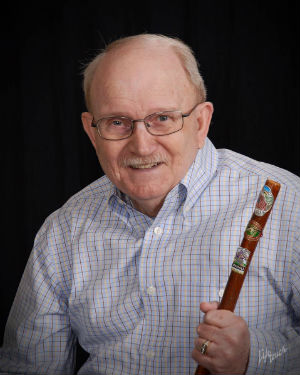 By the time Jim Hyndman was diagnosed with secondary progressive multiple sclerosis (MS) in 2009, he was unable to walk and suffering intense, painful lower extremity muscle spasms. Today, he stands upright using a walking stick decorated with medallions from his travels.

He credits the transformation to three subspecialists affiliated with the Mischer Neuroscience Institute (MNI) and a doctor of physical therapy at TIRR Memorial Hermann.

In August of 2009, Hyndman was referred by a neurologist affiliated with Memorial Hermann The Woodlands Hospital to Staley Brod, M.D., professor of neurology and a member of the Multiple Sclerosis Research Group Clinic at UTHealth Medical School. Dr. Brod, who is board certified in internal medicine and neurology, started his patient on a regimen of pain medications, intravenous and oral chemotherapy, and oral baclofen, which acts on spinal cord nerves to decrease the number and severity of muscle spasms, relieve pain and improve muscle movement.

“When I first started on baclofen, I was taking half a pill a day,” Hyndman recalls. “A year later, I was up to 11 pills a day and still having muscle spasms that were strong enough to throw me out of bed at night.” When Dr. Brod saw that the high dose of oral baclofen was not improving Hyndman’s spasticity, he referred him to neurologist Erin Furr-Stimming, MD, for evaluation for intrathecal baclofen pump implantation. The implantable pump delivers baclofen directly into the cerebrospinal fluid in the space between the spinal cord and the protective sheath surrounding the cord, minimizing the side effects often associated with higher-dose oral or intravenous delivery of the drug.

Certified by the American Board of Psychiatry and Neurology, Dr. Furr-Stimming is a movement disorders specialist who focuses on the treatment of spasticity, Parkinson’s disease, dystonia and other neurodegenerative diseases. “Jim was actually tolerating the high dose of oral baclofen, however, he continued to experience significant lower-extremity spasms that were negatively affecting his quality of life,” she says. “We thought he would likely be a good candidate for intrathecal baclofen pump implantation.”

In May of 2010 Dr. Furr-Stimming performed a neurological exam and talked with Hyndman about placement of a pump, which involves a surgical procedure. He agreed to undergo testing to determine if intrathecal baclofen would improve the spasms.

“When we perform an intrathecal baclofen trial, we’re looking for at least a 50 percent improvement in spasticity using the Modified Ashworth Scale,” she says. “We inject baclofen into the intrathecal space and evaluate its effectiveness at two hours and four hours post injection.”

“They videotaped me walking and recorded my range of motion, then injected the baclofen, waited two hours and evaluated me again,” Hyndman says. “There was quite a big difference. We waited two more hours and did the test again, and the results almost doubled in terms of my range of motion and ability to move.”

When I first started on baclofen, I was taking half a pill a day,” Hyndman recalls. “A year later, I was up to 11 pills a day and still having muscle spasms that were strong enough to throw me out of bed at night.

On June 30, 2010, MNI neurosurgeon Albert Fenoy, MD an assistant professor at UTHealth Medical School, surgically implanted a programmable pump under the skin of Hyndman’s abdomen near the waistline. The pump, which releases prescribed amounts of baclofen, is a round metal disc about an inch thick and three inches in diameter attached to a catheter leading to the spinal canal. An external programmer allows Dr. Furr-Stimming to make adjustments in the dose, rate and timing of the medication.

During the months of programming medication delivery based on his body’s response to baclofen, Hyndman underwent outpatient physical therapy near his home in The Woodlands. “My response to the pump was immediate,” he says. “The spasms were gone but I still had tingling and my right foot would move on its own. After Dr. Furr-Stimming fine-tuned the settings to eliminate these movements and sync the pump with my needs, many, many months have passed without the need for further adjustment.”

In February 2012, Dr. Furr-Stimming referred Hyndman to TIRR Memorial Hermann Adult and Pediatric Outpatient Rehabilitation at Kirby Glen for specialized therapy. “That’s when I met the person who pushed me over my next hurdle,” he says. During the next four months, Jessica De La Rosa, PT, DPT, NCS, then physical therapy clinical coordinator and recently named director of outpatient rehabilitation, worked with Hyndman to improve his balance and mobility.

Back on His Feet

“Jessica worked wonders for me,” he says. “I arrived with my walker and after we started therapy, she told me not to bring it back, that she was going to work with me until I could walk upright with a walking stick. I’d been through physical therapy off and on since 2009 and was really surprised at the quality and professionalism of the therapists at TIRR Memorial Hermann. Over the next few months, Jessica had me walking backwards, walking unaided, walking in the grass instead of on a flat surface, walking without visual cues for balance, walking on a moving floor. I got to where I could keep my balance with the floor moving.

“I learned that some people in therapy don’t take it seriously and give it their all, and as a result, they don’t see the same results. No guts, no glory,” he says. “Between Dr. Furr-Stimming and Jessica my life has changed dramatically in terms of how I get from one point to another. I’m in debt to both of those women.”

At home, Hyndman walks unaided. “The issue for me is uneven ground or stepping up on a curb,” he says. “The walking stick allows me to compensate for my balance issues. When my wife and I travel, I reserve a van with a lift and take my electric scooter with me. If I’m just going out to eat, I’ll take my walking stick. If I don’t know how far I’ll have to walk to get from point A to point B, I have my scooter as back up. But my primary mode of mobility is my walking stick.”

A trip to Switzerland before he was diagnosed with MS gave him the inspiration to start collecting metal medallions to nail to his walking stick. “In Switzerland I saw a lot of people hiking with walking sticks covered with medallions. I started collecting them, and now people stop me and ask me about them – my walking stick is a real conversation starter.

“I’m fortunate to have a really good medical team,” says Hyndman, who just returned from vacation in California. “I can’t say enough about the difference Dr. Brod, Dr. Furr-Stimming and Jessica have made in my life. When I started this journey, my challenge was learning to get around in a wheelchair. Now I’m walking around at home, and when I come in to see Dr. Furr-Stimming to have my pump refilled, I have my walking stick, period.”