Josetta’s Story: Cheering on Her Team after Stroke 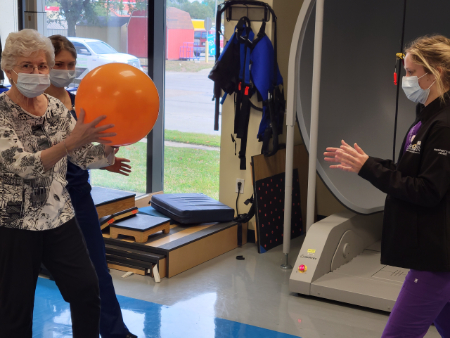 Josetta Smith and her husband, Jerry, were less than an hour from leaving on an RV trip to Bandera, Texas, with friends in June 2021. They were finishing up the necessary preparations at home when Josetta tried to rise from a chair to take care of some final details before getting into the RV to depart. However, she was unable to stand. Jerry was able to help her stand, but when she tried to take a step, she immediately collapsed.

“Fortunately, I was still holding her as she started trying to walk,” said Jerry. “So, as she started to collapse, I was able to let her down to the floor without her falling.”

Jerry called 911 as well as their son who lives nearby. The ambulance took her to a nearby hospital in northwest Houston where Josetta was diagnosed with a stroke. She stayed at that acute care hospital for a week. Then, the physician at that hospital recommended Josetta transfer to TIRR Memorial Hermann–Greater Heights to begin her rehabilitation.

“When I arrived at TIRR Memorial Hermann–Greater Heights, I could not move any part of my left side–not a finger, not a toe,” said Josetta.

“Josetta required significant assistance with transfers and she could only stand briefly when she arrived at TIRR Memorial Hermann–Greater Heights,” said Dr. Richard Huang, assistant professor at McGovern Medical School at UTHealth Houston and medical director of inpatient rehabilitation at TIRR Memorial Hermann–Greater Heights. “She made tremendous progress during her stay and by the time she was discharged she was taking steps and beginning to work on climbing stairs.”

Josetta’s husband and children are Texas A&M alumni and the family has had season football tickets since 1997. They enjoy travelling in their RV to College Station, where they can tailgate for all of the home football games. In addition to doing activities of daily living on her own, climbing the stairs to her RV became one of Josetta’s goals so that she could resume travelling.

As an inpatient, she had daily occupational and physical therapy. Since her speech was unaffected by her stroke, her care team determined speech therapy was not necessary for her.

“Josetta could not sit without falling over when she first came to inpatient rehabilitation, let alone stand, but she worked tirelessly to improve,” said Anne Gwinn, her inpatient physical therapist. “We started with static sitting–utilizing a mirror for visual feedback. We also worked on the therapy mat doing bridging, kneeling and getting on all fours. When she mastered sitting balance, we started standing. It took almost her entire inpatient stay to be able to sit, stand, and transfer to her wheelchair safely. She started taking a few steps the last few days of her stay.”

After 4 weeks at TIRR Memorial Hermann–Greater Heights for inpatient care, Josetta was discharged to continue her recovery there as an outpatient. 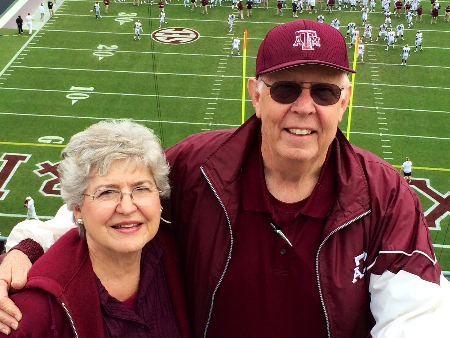 “Josetta significantly progressed during her time at outpatient physical therapy,” said her outpatient physical therapist, Kendall Hart. “Initially she was walking with a walker and required assistance with daily activities. However, through strengthening, balance, endurance, and walking-specific exercises, she has progressed to walking without any type of assistive device and is able to perform tasks around the house without help. She came to outpatient therapy stating her No.1 goal was to be able to climb into her RV, so she could travel with her husband (specifically to College Station to watch the Texas A&M Aggies play football)!”

At home, she doesn’t need any walking assistance and she is getting back to doing things at home like cooking and laundry.

Her outpatient occupational therapist, Kristin Baumgarten Denson, said, “Prior to her stroke Josetta was the primary caretaker of the household, managing finances, cleaning, and cooking. She was eager to get back in the kitchen and back to managing her finances. During our treatment sessions, we completed simulated cooking and baking tasks in our treatment gym to ensure her safe and confident return to the kitchen. The Smiths are die-hard Aggies and tailgate most home games, so we worked diligently to increase her balance, endurance and coordination through stretching, strengthening, and dual tasking to ensure her confidence returning to one of her favorite past times.”

Before she was discharged from outpatient therapy, Josetta reached her goal and traveled in her RV to cheer on the Aggies. She is no longer using the cane for walking, even when outside. Jerry said, “She sometimes holds my hand when walking if the terrain is unlevel or if she feels a little uneasy, which is seldom.”

Kristin added, “Mrs. Smith was a pleasure to work with here at TIRR Memorial Hermann–Greater Heights Outpatient Rehabilitation. She tried to give it her all for our sessions. We were so glad she was able to return to see the Aggies play.”