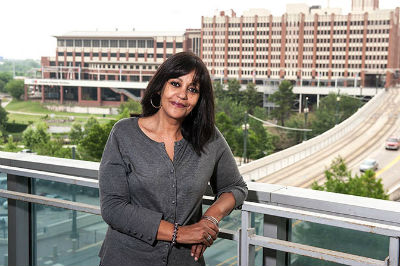 “Maybe it’s just stress,” thought Judith Harris when she suddenly experienced a severe pain in her neck while lying on the couch in her downtown Houston home. A professor of criminal justice at the University of Houston Downtown, Harris juggles a heavy workload and academic publication schedule. “I thought maybe I just needed a good massage,” she notes. Just in case, Harris contacted a friend who is a nurse practitioner at Memorial Hermann-Texas Medical Center (TMC). He suggested a pinched nerve, but upon observing that her blood pressure kept increasing, urged her to call 911. EMTs quickly responded and repeatedly asked Harris if she had a headache; no, she insisted, it was her neck.

Harris was transported to the emergency room at Memorial Hermann-TMC and as she sat in the waiting room, her condition rapidly deteriorated. The pain in her neck worsened and when it came time to go to an examination room, Harris found she couldn’t walk: “At that point I was more scared than I have ever been in my life.” The attending physician ordered a CT scan that yielded troubling results. “He said, ‘you have blood in your head.’” Harris was swiftly taken to the hospital’s Neuro ICU.

In the Neuro ICU, Harris was immediately given something for her pain and was greeted by Arthur Day, MD, a neurosurgeon at Mischer Neuroscience Institute at Memorial Hermann-TMC and professor of neurosurgery at the McGovern Medical School at UTHealth. He told Harris she might be experiencing a spontaneous bleed, a common but nonetheless frightening event.  Dr. Day approached Harris warmly and calmly explained that they would do some tests to determine the source of the blood. “It was scary,” Harris recalls, “But Dr. Day and the nurses at the Neuro ICU were wonderful and reassured me about the procedures.”

The tests brought some unexpected news. Harris had a spontaneous bleed called a subarachnoid hemorrhage, but she also had an unruptured aneurysm. While the bleed was the cause of Harris’s symptoms, the aneurysm’s presence was still a significant concern. Dr. Day outlined her options: following treatment for the bleed, Harris could leave and hope that the aneurysm would remain dormant. However, if it did rupture, the results could be fatal. The second option was surgery.

Ultimately, Harris chose to have surgery. “It was a hard decision,” Harris explains, “But I also knew I couldn’t walk around like a normal person knowing about the aneurysm.” Dr. Day and his team operated on Harris on Valentine’s Day of 2014. “I awoke from the surgery still scared and with staples all over my head. But what did Dr. Day say? ‘Hey, you look great. You’re beautiful!,” Harris recounts fondly. “He was always trying his best to keep my spirits up.”

“It’s very unusual to have a subarachnoid hemorrhage of unknown cause and also have an aneurysm elsewhere,” says Dr. Day. “Had Judith not had this spontaneous bleed, we wouldn’t have known she had an aneurysm. This bleed in a way saved her life.”

By March 17th of that same year, Harris had returned to work as a professor at the University of Houston with a full course load. “I feel incredibly blessed. I had one of the best neurosurgeons. Dr. Day is so capable and he does what he does so well.”

Recovery hasn’t always been easy, emotionally or physically, but Harris overall feels lucky as well as grateful to have suffered no serious side effects from surgery. Dr. Day credits the positive outcome in Judith’s case, and in so many similar cases at Mischer Neuroscience Institute, to the outstanding facilities and highly experienced staff of physicians and caregivers.

“That’s really what separates us at Mischer Neuroscience Institute,” says Dr. Day, “our ability to perform complex procedures that regularly yield good results so that patients can resume life as usual.”

Harris’s experience certainly testifies to that fact: “You look at me now,” she smiles, “and you would never know.”