On Making the Breast Cancer Treatment Decision: A Personal Story 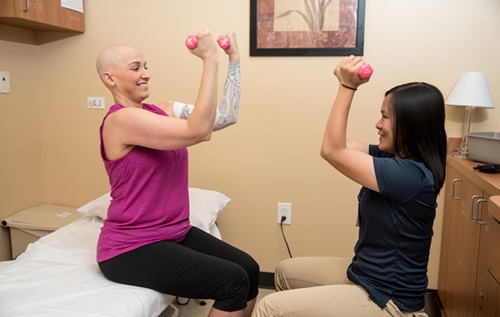 Leigh Rozelle found the lump purely by accident, just three days before Christmas. As she crossed her arms, she felt a golf ball-size knot on the outer side of her left breast. My family practitioner was able to squeeze me into her schedule the very next day,” says Rozelle, who is 38. “When she examined my breast, she was concerned and asked me if I had time to see a breast surgeon the following morning if she could get me in.”

The breast surgeon was Liz Lee, MD, who is affiliated with Memorial Hermann Memorial City Medical Center. “Dr. Lee did an ultrasound and told me the lump was slightly larger than 3 centimeters in diameter,” Rozelle says. “She wanted to move quickly and sent me to the breast center for a mammogram and biopsy the following day. And that’s how I spent my Christmas Eve.”

Four days later on Dec. 28, 2015, she heard her diagnosis: stage 1A, grade 3 ductal carcinoma in situ with some invasive components. Grade 3 and 4 tumors tend to grow rapidly – much faster than lower grade tumors. She also learned that her particular cancer was triple negative – characterized by the absence of three receptors known to fuel most breast cancers: estrogen receptors (ER), progesterone receptors (PR) and human epidermal growth factor receptor 2 (HER2). Although triple-negative breast cancers do not respond to receptor-targeted treatment and tend to be more aggressive, they typically respond to chemotherapy. The diagnosis gave her a glimpse into the future.

The multidisciplinary Breast Cancer Tumor Board at Memorial Hermann Memorial City met to discuss Rozelle’s case and agreed that surgery was the best first course of action, followed by chemotherapy. In January, she met Frankie Ann Holmes, MD, a medical oncologist affiliated with the hospital.

“I was struggling with what type of surgery to have – lumpectomy or mastectomy – and had a scare in the process,” Rozelle says. “On the MRI they found patches in my right breast, which were biopsied and identified as dense tissue, not tumors. Then I had lots of questions: If I do a mastectomy and then need radiation, will that delay reconstruction? How will I know if I need radiation? I learned that they could remove a few lymph nodes to make sure that the cancer hadn’t spread. We did that on Feb. 1, 2016, in the left arm. Luckily all five lymph nodes were negative and I would not need radiation. But the tumor was growing, and because of the size, I felt that a lumpectomy would leave my breast lopsided. I was dealing with something aggressive and I wanted to take aggressive action. I had faith in Dr. Lee. In the end I decided to move forward with a mastectomy, and then decided on a double mastectomy because I’m young and want peace of mind.”

Dr. Holmes referred Rozelle for prehabilitation – occupational therapy in advance of mastectomy to optimize the outcome and help improve quality of life after treatment.

“I’m a big believer in prehabilitation,” Dr. Holmes says. “When we see cancer patients, we’re very aware that they have lives beyond diagnosis and treatment. Patients who have mastectomy and lymph node dissection, as Leigh did, will lose some range of motion in the arm and shoulder on the affected side and also be at risk for lymphedema. If a patient is deconditioned before chemotherapy, an exercise program can help with fatigue during treatment. We can address all of these challenges before treatment.”

Prior to surgery, Rozelle saw Emilia Dewi, OTR, OTD, CLT, an occupational therapist and certified lymphedema therapist at TIRR Memorial Hermann Outpatient Rehabilitation-Memorial City. Dewi evaluated her and took measurements for a compression sleeve, which encourages the movement of lymph through the body and discourages pooling of lymph in the arm.

“After the mastectomy, I had four drains and couldn’t do a whole lot of exercising but I could do some light stretching,” Rozelle says. “Once the drains were out, I went back to continue therapy before I started chemotherapy.” She saw Emilia twice a week for about a month, working primarily on improving range of motion in her shoulder.

“As it turns out, I didn’t have a lot of swelling,” she says. “I was aware of it, but it was nothing anyone else would notice. Emilia got me started early with a sleeve to help prevent full-blown lymphedema.”

Rozelle prepared for chemotherapy as diligently as she had prepared her home for life after mastectomy. “I read what to expect of chemotherapy but avoided the horror stories. I focused on things I could do around the home to make my life easier. The preparations were comforting and gave me a sense of being in control.”

Early on, Dr. Lee emphasized Rozelle’s role in treatment planning. “She told me that they were going to recommend chemotherapy, but that it was my choice whether to have it,” she says. “I was surprised. I’ve been blessed with good doctors, including my reconstructive surgeon, Dr. Rafi Bidros. He’s phenomenal. As a team they have it down to a really good science.”

Rozelle finished chemotherapy in mid-August and had her reconstructive surgery in November after giving herself a chance to bounce back from chemotherapy. “No matter how much I prepared and took charge of things, there were bad days, so I was happy to be done with chemotherapy. A lot of friends and family came to celebrate my last day, and all the nurses came out to wish me well. I have a lot of good support and a lot of people praying for me at different churches, and I know that this is just a season in my life. It will pass.”