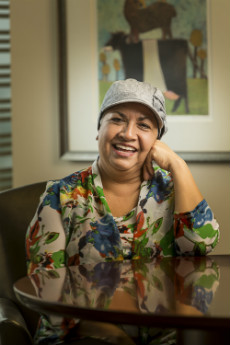 For those diagnosed with glioblastoma multiforme (GBM), one of the most common and deadly types of malignant brain tumors, the outlook for long-term survival can be devastatingly grim. The average life expectancy after diagnosis hovers near 15 months, and the five-year survival rate is less than 4 percent. But for 57-year-old Maria Flores, succumbing to the disease without a fight was not an option. Her loved ones say that through her strong faith, positive outlook and the exceptional care she has received at the Memorial Hermann Mischer Neuroscience Institute at the Texas Medical Center, she is still here today – an astounding seven years after her original diagnosis.

In December of 2009, the sudden onset of a crushing headache brought Flores to the Emergency Center at Memorial Hermann-Texas Medical Center, where an MRI revealed a mass that was consistent with GBM. Classified clinically as the most serious type of brain tumor and considered a “grade IV astrocytoma,” the condition derives its name from the star-shaped appearance of the astrocytes, or glial cells, in the brain from which it develops. The very next day, Dong Kim, MD, Director of Mischer Neuroscience Institute at Memorial Hermann-Texas Medical Center and Chair of the Vivian L. Smith Department of Neurosurgery at McGovern Medical School at UTHealth, performed surgery to remove the life-threatening tumor.

“These tumors are extremely infiltrative and aggressive. The more tumor that can be removed surgically, the better the prognosis,” said Jay-Jiguang Zhu, MD, PhD, the neuro-oncologist at Mischer Neuroscience Institute who has overseen Flores’ care since her diagnosis. “All visible areas of the tumor, including the core, were removed during surgery. However, with GBM, there are surrounding cells that remain beyond detection.” According to Dr. Zhu, chemotherapy and radiation are the standard treatments for most patients following surgery to shrink the tumor and prevent further tumor progression.

After a successful surgery and undergoing chemotherapy and radiation, Flores remained stable without evidence of GBM until January of 2013 when an MRI showed tumor activity once again. This time, she underwent Gamma Knife stereotactic radiosurgery, performed by Angel I. Blanco, MD, Director of Radiation Oncology and Stereotactic Radiosurgery at Mischer Neuroscience Institute. The Gamma Knife is a unique treatment method that delivers extremely focused radiation beams to targets in the brain. One hundred and ninety-two individual beams of radiation are positioned in a hemisphere so that all the beams can converge on a single focal point. The shape and dose of radiation is optimized to hit only the target without damaging surrounding healthy tissue. Mischer Neuroscience Institute has successfully treated more than 3,400 patients since acquiring the region's first Gamma Knife in 1993.

“After the Gamma Knife, we used a combination of three different chemotherapy drugs, which included bevacizumab, irinotecan and temozolomide, versus the standard one-drug treatment, with the total treatment cycle taking a little over a year,” said Dr. Zhu. “Mrs. Flores tolerated the treatment very well. She is a strong, determined and positive woman, and was very willing to treat her GBM as aggressively as possible.”

This February, Flores successfully underwent a second surgery by Dr. Kim after an MRI revealed tumor progression yet again. “This is the pattern of this disease, and why GBM patients must be closely monitored,” said Dr. Zhu. “We conduct an MRI every two months, and I review the results very carefully with the multidisciplinary team on our tumor board, and then again with Mrs. Flores during every visit.” Surprisingly, pathology reports after her surgery showed no active GBM tumor cells in the tissue removed, according to Dr. Zhu, and the reason why remains a mystery – although a welcome one. “Mrs. Flores’ case is very unique in that she has tolerated treatment so well,” he added. “Perhaps her genes give her a better prognostic disposition, but in any case, she is unflappable and unwavering in her positive attitude, and she has refused to be intimidated by this diagnosis.”

Flores’ daughter-in-law and husband, both of whom accompany her to every appointment, agree wholeheartedly. “She is very smart, very brave and is definitely a survivor,” said her daughter-in-law Paulina. “Throughout all of this, she has carried on with her life, continuing to cook and do all the things she loves.” As for Flores, her explanation of defying the odds are decidedly more humble. “How lucky am I to have found Dr. Kim, Dr. Blanco and Dr. Zhu,” she said. “I am truly blessed.”