Martha Mazzola: A Day Unlike Any Other

Martha Mazzola recalls very little of the evening she suffered an acute ischemic stroke. “It started out as a day just like any other, and along toward evening I found myself sitting on a chair at our kitchen table with my husband on his knees beside me saying he was going to call 911,” the 84-year-old Houston resident says. “I said, ‘Why? I’m fine.’ He told me that he couldn’t understand me, that my speech was totally garbled.” 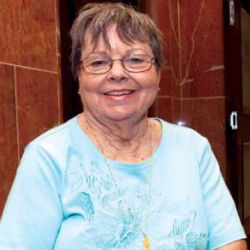 Mazzola remembers that the ambulance passed nearby hospitals as it sped toward Mischer Neuroscience Institute at Memorial Hermann-Texas Medical Center (TMC), which houses the largest and most comprehensive neuroscience program in Texas, and is home to the 10-county Greater Houston area’s largest onsite stroke team. By working closely with the Houston Fire Department and local EMS services, Mischer Neuroscience Institute’s stroke team has logged an impressive record of success in the administration of tissue plasminogen activator (tPA) – more than 10 times the national average of 2 percent.

When Mazzola arrived at the Emergency Center, neurologist Andrew Barreto, MD, a member of the Institute’s stroke team, administered tPA. He also determined that she was a good candidate for an additional investigational therapy that applies ultrasound energy to help dissolve the blood clots that cause ischemic stroke.

When her family consented, Mazzola became one of more than 35 people at two American study sites to benefit from participation in a Phase I/II study to determine the safety of a novel, external hands-free transcranial Doppler ultrasound system in healthy volunteers and ischemic stroke patients. James C. Grotta, MD, professor of Neurology at McGovern Medical School at The University of Texas Health Science Center at Houston (UTHealth), is principal investigator of the study, the formal name of which is “CLOTBUST-Hands Free: Combined Lysis of Thrombus in Brain Ischemia with Transcranial Ultrasound and Systemic tPA.” The device was under study at McGovern Medical School and the University of Alabama at Birmingham; if found to be safe, it will enable the more widespread use of operatorindependent, ultrasound-enhanced thrombolysis and the planning of a large Phase III efficacy trial.

The results of the original multicenter, randomized CLOTBUST trial, coordinated by McGovern Medical School and published in the New England Journal of Medicine in 2004, found that continuous transcranial Doppler ultrasound improved tPA-induced arterial recanalization. “In the original study, Dr. Grotta and the CLOTBUST investigators combined tPA with a handheld ultrasound probe,” says Dr. Barreto, who is co-principal investigator of CLOTBUST-Hands Free and an assistant professor at McGovern Medical School. “Half of the 126 patients enrolled received tPA alone and half were treated using tPA and the handheld device.

When the results justified a larger study, the investigators decided it would be more efficient to develop a head frame for hands-free application of ultrasound than to train neurologists how to use the handheld device.” Andrei Alexandrov, MD, also a co-principal investigator of the study and current director of the Comprehensive Stroke Research Center at the University of Alabama at Birmingham, developed the helmet-like, handsfree device currently under study. Dr. Alexandrov was previously a member of the Mischer Neuroscience Institute’s stroke team.

The CLOTBUST-HF study population includes 15 healthy volunteers who assessed the safety of the device in Phase I of the trial by tolerating two hours of transcranial ultrasound delivered through the head frame. All Phase I participants had normal brain MRIs before and after ultrasound. A detailed physical examination of skin integrity post-insonation determined that there also were no adverse dermatological effects.

Participants in Phase IIa and IIb received intravenous (IV) tPA according to American Heart Association/American Stroke Association treatment guidelines. Phase IIa of the study included 20 patients with ischemic stroke treated with IV tPA within 4.5 hours of the event; they will be followed for three years. Phase IIb, included 40 patients with ischemic stroke treated with IV tPA and randomized to receive either ultrasound therapy or sham therapy. All patients were evaluated for arterial recanalization two hours after treatment to determine if the clot has dissolved. Patients were followed for three months and have their stroke deficits measured using the National Institutes of Health Stroke Scale, and any remaining disability scored using modified Rankin Scale.

“Mrs. Mazzola’s clot had completely dissolved after the tPA plus hands-free ultrasound treatment was completed,” Dr. Barreto says. “Because we were able to open the artery so quickly, we averted a large, life-threatening stroke.”

Mazzola says she’s amazed she survived the stroke with so little damage. “The EMS folks took me to the right hospital, and I’m glad I had the opportunity to participate in the study,” she says. “You can’t offer new treatments without people who are willing to be pioneers and test them. People have been surprised by the speed of my recovery, and I’m pleased with my results. I saw the scans of my brain before and after. Such a dramatic difference between the two!”

Martha Mazzola says she’s amazed she survived the stroke with so little damage. “The EMS folks took me to the right hospital, and I’m glad I had the opportunity to participate in the study,” she says. “You can’t offer new treatments without people who are willing to be pioneers and test them. People have been surprised by the speed of my recovery, and I’m pleased with my results. I saw the scans of my brain before and after. Such a dramatic difference between the two!”