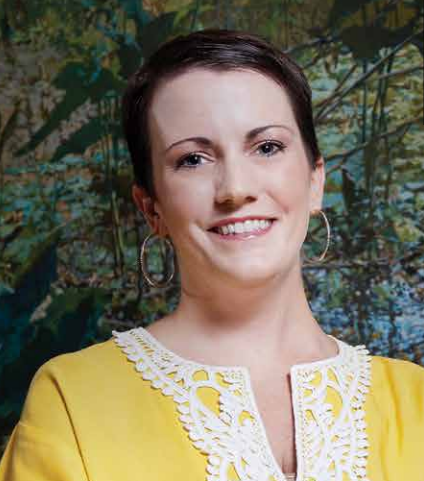 Seven years ago Megan Collins’ life was marked by pain, social embarrassment and uncertainty about her medical future. Today, the 35-year-old considers herself lucky.

Collins began having balance and coordination problems in 2007 at the age of 30, and they worsened progressively. An employee of the Children’s Neurology Clinic in Fort Worth, Texas, she was referred to Mya Schiess, MD, by two pediatric neurologists who had completed fellowships with the movement disorders specialist at The University of Texas Health Science Center at Houston (UTHealth) Medical School. Dr. Schiess is professor and vice chair of the department of Neurology and holds the Adriana Blood Endowed Chair at UTHealth Medical School. She is affiliated with the Mischer Neuroscience Institute and is also the director of UT MOVE, a program focused on clinical care, education and basic science research on the neurological conditions of motor systems disruption, including movement disorders, cerebral palsy, spasticity, neurodegenerative diseases and dementias.

“We worked with Megan for about a year and responded to the disorder before we knew exactly what we were dealing with,” Dr. Schiess says. “It took us some time to reach a conclusive diagnosis. Her father had similar symptoms, so we suspected a genetic disorder. But testing for a full panel of inherited ataxia disorders is expensive, and Megan is a single working mom.”

Collins’ father eventually underwent testing paid for by the Veterans Administration and was diagnosed with spinocerebellar ataxia type 1 (SCA1). “When a family member tests positive for a disorder and another family member has the same symptomatology, we can narrow down the testing to one relatively inexpensive test,” Dr. Schiess says. “Megan also tested positive for the disorder.”

Spinocerebellar ataxia type 1 is characterized by progressive problems with movement. Patients with the disorder initially experience problems with balance – ataxia – and coordination. Other signs and symptoms of the disorder may include speech and swallowing difficulties, spasticity, and weakness in the muscles that control involuntary eye movements. Individuals with SCA1 may have cognitive impairment marked by difficulty processing, learning and remembering information. Over time, they may develop numbness, tingling or pain in the arms and legs, muscle wasting, twitches and uncontrolled muscle tensing, known as dystonia.

Over the course of the next year, Collins developed the classic symptoms of craniocervical dystonia, a movement disorder characterized by intermittent spasms of the neck and shoulder muscles that cause abnormal head movements. “Botulinum toxin injections provided relief from the spasms,” Dr. Schiess says. “After a lumbar puncture revealed neurotransmitter deficits, we prescribed levodopa and sertraline to target the deficiencies. The medications helped alleviate symptoms, and subsequent analysis of the cerebrospinal fluid showed a normalization of her levels. We also started her on baclofen for spasticity and clonazepam for her dystonia.”

Collins responded favorably to the treatment regimen for almost 18 months. Then her dystonia began to worsen and evolved aggressively for almost a year, despite increased dosage and distribution of botulinum toxin injections. Eventually, her upper limbs and trunk became involved, and her severe dystonic crises became unresponsive to medication changes. She required several emergency department visits and hospitalizations.

“Megan reached the point that she was no longer able to work,” Dr. Schiess says. “We kept her out of the hospital as long as possible. She was on very high doses of medication, and we realized that her disorder was not coming under control despite our best efforts.”

Collins had read about deep brain stimulation (DBS), which was approved by the FDA in 2003 for the treatment of dystonia. “Dr. Schiess agreed that I could see Dr. Fenoy for a consult,” she says. “When I scheduled the appointment with him, I was in the middle of a dystonic storm, never knowing when I was going to have an episode. I ended up having one in his office. It was very scary and crazy but I feel lucky that he could see what was happening to me.”

Albert Fenoy, MD, is a neurosurgeon and deep brain stimulation specialist affiliated with the Mischer Neuroscience Institute and an assistant professor in the Vivian L. Smith Department of Neurosurgery at the UTHealth Medical School. On May 22, 2012, with Dr. Schiess attending in the OR, he placed a DBS electrode into Collins’ globus pallidus internus.

“We placed a stereotactic frame on Megan’s head and using MRI visualization, we made two burr holes in the skull while she was awake, and descended microelectrodes into the brain to verify neuronal activity and confirm that we’d reached the target area,” Dr. Fenoy says. “Then we placed the actual DBS leads and test stimulated to see what kind of response she had and whether there were any side effects.” Two weeks later, on June 6, with Collins under general anesthesia, they placed extensions from the electrodes to a pulse generator and implanted the generator in her chest under the clavicle.

On June 7, Dr. Schiess programmed the stimulator for the first time. “It’s been a miracle,” Collins says. It’s amazing what I can do now that I couldn’t do before. I can now stand up with my feet together and move better than I’ve been able to move in years. I would recommend Dr. Schiess and Dr. Fenoy to anyone in the world. They’ve changed my life.”

“When you understand a therapy and are involved in the selection of many candidates over time and have the opportunity to observe the results, you develop a good sense of what it can and can’t do. We’re very good DBS programmers here,” Dr. Schiess says. “We believe that if DBS can help a patient improve in even a single area, it should be applied. When indicated, it can greatly improve a patient’s life. Four months out from her surgery, Megan is holding her own, and her dystonia is better controlled. As time goes on, through research, we’ll find different targets in the brain and develop more exquisite control. Science is an evolutionary process. We keep driving forward.”