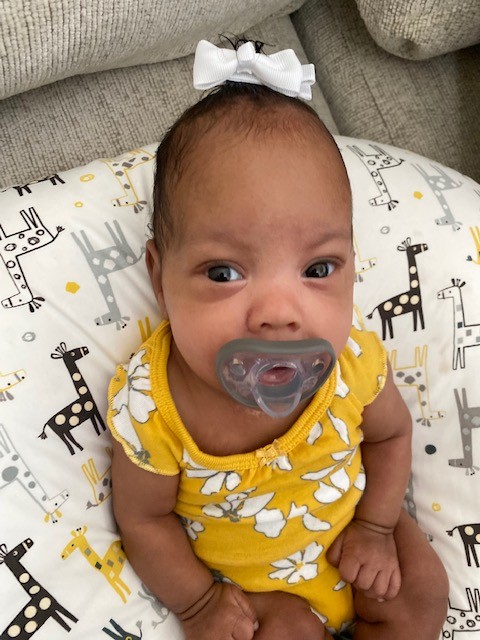 After years of wanting a baby of their own, Sara and Shamesia Lyles learned that they were expecting. The couple had gone through the lengthy process of reciprocal in vitro fertilization (RIVF), which allowed both Sara and Shamesia to be a part of the pregnancy; Sara supplied her eggs, which, once fertilized and in the form of an embryo, were implanted into Shamesia to carry.

“Everything was flawless,” Sara recalled. “Shamesia felt great, and she didn’t have any type of morning sickness or anything—it was just smooth sailing.”

But at a routine ultrasound at 16 weeks’ gestation, the couple learned that Shamesia’s amniotic fluid was measuring low.

“We were referred to a specialist, and Shamesia was told to drink as much water as she could,” Sara said. “The doctor told us not to worry too much.”

At the follow-up appointment, however, the tone was subdued. Then, a nurse came to check Shamesia’s temperature.

“We assumed it had to do with COVID-19 protocols, but later we learned it was because they were concerned that she had an infection—her fluid had gotten so low,” Sara said.

Then, the couple received devastating news: their baby was not going to survive.

“We were in shock,” Sara said. “It went from her fluid being low to a life-or-death situation.”

At the time, Shamesia was only 18 weeks along. Although their baby’s heartbeat was strong, the amniotic fluid was too low for the baby’s lungs to develop during the critical period between 16 to 20 weeks’ gestation. Babies in utero need to be in enough amniotic fluid to move for proper growth, affecting critical organs like the lungs and digestive system as well as the development of limbs. Amniotic fluid also protects babies from infection, umbilical cord compression, and it regulates their body temperature. Because Shamesia’s fluid was so depleted, the couple was told that their baby would never be able to breath on its own and would be severely deformed if the baby was carried to term.

Although Sara and Shamesia understood, neither were willing to accept this tragic news. At 19 weeks, they got a second opinion at another Houston hospital, hoping for a miracle.

“Our doctor at the time said that she was really, really sorry, but that our first doctor was correct—that our baby was not going to survive,” Sara said. “She also told us that there is the additional concern about Shamesia’s body becoming infected, because if it did, it would be a life-threatening infection.”

Heartbroken, the couple went home to discuss their options. But that same night, Shamesia started bleeding.

“We thought maybe she was miscarrying, so we ended up going to another hospital emergency room (ER) close to home,” Sara said. “We didn’t want to risk an infection.”

There, it was determined that Shamesia was not miscarrying. Her white blood cell count, however, was elevated, so she was admitted and put on I.V. antibiotics.

“We had been planning our gender reveal before everything happened, so I called my sister from the hospital, who had the envelope, and asked her to tell me the gender of our baby,” Sara said.

They decided to name the baby, a little girl, Brielle Grace. 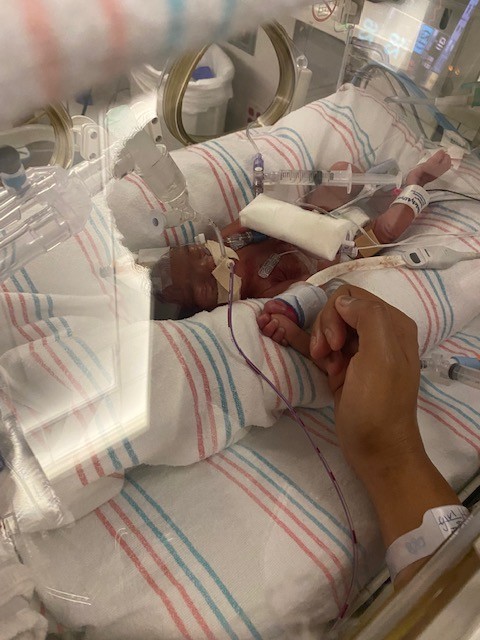 Then, something incredible happened. Sara and Shamesia were told that the initial ultrasound performed in the ER earlier that day showed that there was still some amniotic fluid left.

“This whole time we thought her levels were down to zero essentially, but hearing that gave us hope,” Sara said.

Shamesia was released from the hospital with heavy oral antibiotics and with strict orders to stay in bed. She was ordered to check her temperature hourly to ensure she didn’t develop a fever. She also managed her gestational diabetes, pricking herself multiple times per day to keep her blood sugar regulated. Shamesia did everything in her power to give her baby girl a fighting chance, even as her own life lay in the balance.

The couple was desperate and read about a high-risk procedure they thought might save their baby.

“After a few serendipitous phone calls, we found high-risk pregnancy specialist, Dr. Alfredo Gei, who did the procedure,” Sara said. “He was our last and final stop for hope. He reviewed our situation and told us that Shamesia’s condition would not allow for the procedure but that we could monitor the baby and Shamesia in other ways.”

The plan was to remain on bedrest until 23 weeks and then admit Shamesia to the hospital where she would stay on bedrest for as long as possible—ideally to at least 34 weeks.

The day Shamesia hit the 23-week milestone, the couple was at Children’s Memorial Hermann Hospital in the Texas Medical Center with their bags, ready to be admitted.

The Women’s Center at Children’s Memorial Hermann Hospital is a Level IV Maternal Facility, which denotes the highest level of care as designated by the Texas Department of State Health Services (DSHS). The affiliated team of physicians at Children’s Memorial Hermann Hospital provide comprehensive and personalized care for both mothers and babies, including pregnant and post-partum patients with some of the most complex and high-risk issues, as well as babies in need of highly specialized care—all within the same facility. In addition to providing labor and delivery, fetal and neonatal intensive care services, the team also offers cardiovascular and neuroscience specialty services, fertility services, urogynecology, menopause care, pelvic floor health and can treat high-risk complications. 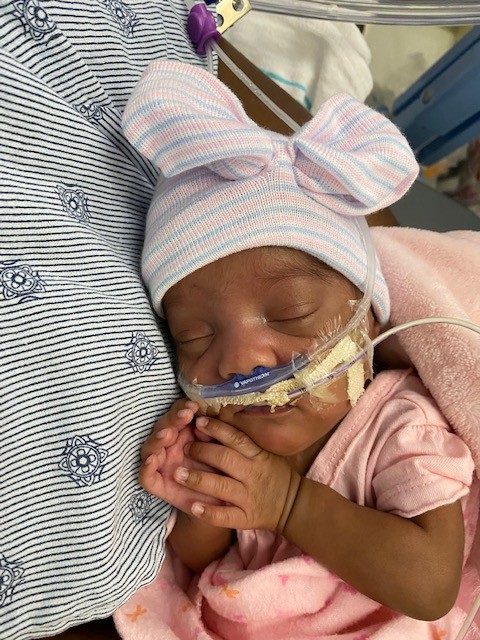 Dr. Gei and the team at Children’s Memorial Hermann Hospital monitored Shamesia and the baby closely. While Brielle continued to develop in some areas, her chest was measuring alarmingly small, suggesting that her lungs were likely not growing as they should. Tracking her growth was complicated by the fact that Shamesia’s fluid was low, making the ultrasounds blurry and difficult to read.

“In the last couple of weeks of Shamesia’s pregnancy, we feared, that even after all this, our baby’s lungs may still not be developing fully,” Sara said. “At this point, we were living one hundred percent off faith.”

That faith would carry them through the next few months. A few weeks later, Shamesia started bleeding more, and the team immediately began preparing her for an emergency C-section.

Brielle was delivered on May 23, 2022, at 26 weeks’ gestation. She weighed just 2 lbs. 5 oz—a micro-preemie, with the odds of survival against her. The delivery was complex and required highly specialized care, since there was almost no fluid surrounding the tiny baby.

In the operating room, a team of specialists stood ready to intubate and stabilize Brielle as soon as she was born. She was rushed to the Level IV Neonatal Intensive Care Unit where she was placed on high-frequency oscillatory ventilation (HFOV), a therapy for newborns suffering from respiratory distress and failure.

Brielle’s complications were life-threatening. Without the HFOV, she was unable to breathe on her own. She also experienced a ruptured lung. She had tubes running in and out of her thin, fragile skin, and painful burns from a sensitivity to the sterilizing wipes necessary for placing her a chest tube and IVs. Her leg was also twisted unnaturally outward, likely from sitting on it in the womb since she could not move freely due to the low fluid.

But Brielle was in the right place for the best chances for survival, and the team of nurses, physicians and specialists in the NICU worked tirelessly to save her life.

“We specialize in caring for the smallest and sickest babies, including premature and critically ill newborns like Brielle,” said Dr. Amir Khan, chief of the Division of Neonatal-Perinatal Medicine at McGovern Medical School at UTHealth Houston and medical director of the NICU at Children’s Memorial Hermann Hospital. “Our Level IV NICU is one of the biggest in Texas, and through the affiliation with McGovern Medical School , they are able to provide a full range of specialists as well as around-the-clock access to neonatologists. We offer cutting-edge therapies using the latest technologies while never losing sight of the importance of compassion and personalized care needed for these vulnerable babies and their families.”

Defying all odds, Sara and Shamesia’s tiny baby held on—and as the weeks went by, she grew stronger and stronger. She began reaching milestones that at one point were thought impossible.

“We are so thankful to Dr. Gei for managing our care, visiting us every single day while Shamesia was hospitalized, and checking in on Brielle in the NICU all the time. He gave us the chance to have our daughter,” said Sara.

As for the new moms, they credit Children’s Memorial Hermann Hospital’s expertise, compassion and care for helping them through the most challenging time of their lives. 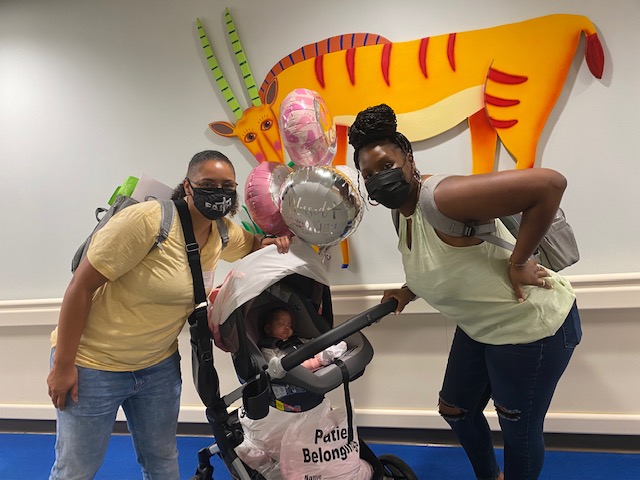 “The NICU nurses were incredible,” Sara said. “I remember one nurse who could tell our daughter was in pain from the burns on her skin, and so she did everything she could to treat the wound and give her medicine to ease the pain.”

Sara recalled another nurse, who took the time to teach them her special method for soothing premature infants without medicine.

“She reminded us that these babies are still supposed to be inside the womb and completely secured by boundaries, so she gently cupped Brielle’s hands together and brought them to her chest and then curled her feet up to help her feel secure,” Sara said. “It was incredible how well it worked.”

Sara said that in addition to the nursing staff, the chaplains, affiliated physicians and entire care team went above and beyond for their young family.

Today, Brielle is continuing to amaze everyone with her progress. After 98 days in the NICU, she was finally ready to go home on August 29, 2022.

“Brielle just turned 4 months old, although her corrected age is just 1 month from her due date. She has grown to 9 pounds, 4 ounces, and all of her follow-up appointments show that she is in good health—a healthy size and good vision and hearing,” Sara said. “She is honestly doing amazing, and it is as if she is just a normal newborn baby. You would never know she came through such a tough fight, and we are so proud. We will make sure she always remembers that she is a very special girl and has a special purpose.”

Sara said that she thinks perhaps Brielle’s prematurity may ultimately be what saved her.

“After she was born, her lungs could grow freely and we didn’t need to worry about the low fluid anymore,” Sara said. “Nobody can be sure, but I do believe that all the pieces had to happen the way they did and that we were at the right place at the right time and with the right people. We are just grateful, and we truly believe everything had to be exactly how it was for this outcome.”