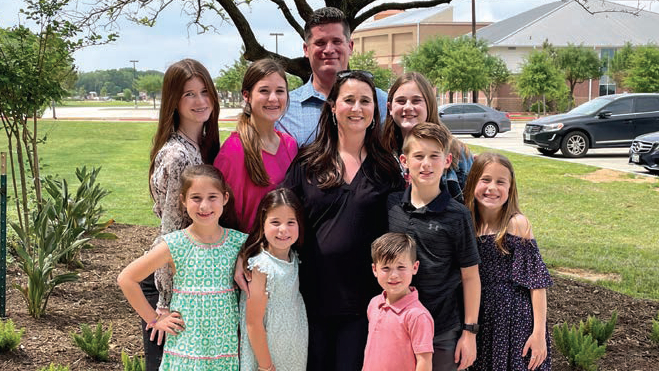 For 5 hours, Marissa Miller laid on the bathroom floor in her family’s home in Cypress, Texas, unable to call for help. Her phone, which sat on the counter only a few feet away, would ring throughout the day, but it was out of her reach. She recalls hearing one of her daughters come home from school and head upstairs. And then another. But the 43-year-old mother of eight unable to call out to them.

Discovered Her on Bathroom Floor

“I remember getting in the shower that morning around 10 a.m. and feeling faint. And that feeling never went away. At some point, I realized that I had had a stroke. I could not move my right arm or my left leg. My phone was on the bathroom counter, but I couldn’t get to it. I could push myself up with my left hand, but I couldn’t grab the phone with my right hand. Every time my phone would ring or ding (with a text message), it would wake me up and make me alert. I cannot tell you how many people, without knowing my situation, reached out to me that day.”

Around 3 p.m. Miller’s eighth grader, Elissa, walked into the bathroom discovered her mother on the floor. She called for her oldest sister, Emma, who called their father, Matt Miller, at Second Baptist Church – Cypress Campus, where he serves as pastor. He called 911 on his way home. The nearest fire department was out on another call, so the call went to Cy-Fair Fire Department – Station 4, who responded and transported Miller to nearby Memorial Hermann Cypress Hospital.

Emergency medicine specialist James Colvin, MD, was the attending physician at the hospital’s Emergency Center that day. “She had the inability to move the right side of the body, indicating potential stroke. And her CT scan showed a dense MCA (middle cerebral artery) sign, which is not present for every stroke patient. But it makes us more suspicious that this is a new stroke that we can actually do something about,” he says. “It’s in the region of the brain that we can get to, to remove a clot.”

At approximately 6 p.m., Miller was transported from Memorial Hermann Cypress Hospital via Life Flight® to Memorial Hermann-TMC, an approximate 12-minute flight, where Dr. Blackburn stood by to perform a minimally invasive procedure to remove the clot that caused Miller’s stroke.

As Dr. Blackburn “In ischemic stroke cases where medical management with (clot busting drug) t-PA is not an option or is ineffective, we can perform a mechanical thrombectomy (clot removal) using either a stent retriever or aspiration. In Miller’s case, we performed a first-pass thrombectomy with aspiration only, using x-ray imaging to guide the catheter through the femoral artery to the clot causing the stroke. Recanalization (clearing of the blockage) was complete. We do almost 200 of these cases a year at Memorial Hermann-TMC.”

Miller, who works as a neonatal intensive care unit (NICU) nurse for Memorial Hermann Health System, hopes to make a full recovery. “Initially, my speech was slurred, my fine motor skills were impaired and I had trouble with word finding,” she says. “But occupational therapy has helped a lot. I should be returning to work soon, gradually working my way back up to full-time.”

She and her family are grateful for the care she received throughout her stroke journey. “And I could not have made it through without the Lord and my faith in Him,” she says.