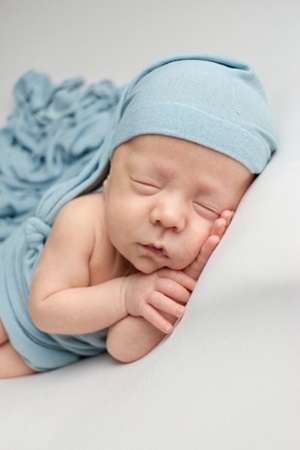 Married life started out with a bang for Sarah and Trevor Nichols. The Houston couple were married during a tropical storm. Two months later, they learned they were expecting identical twins. But nothing could have prepared them for what happened next.

“When the ultrasound technician got to Baby B, she got very quiet,” recalls Sarah. “My husband didn’t catch on. But as the tech was leaving, she touched my hand. That’s when I knew something was wrong.”

At Sarah’s 16-week ultrasound, her obstetrician explained that one of the babies she was carrying had a 2- to 3-centimeter mass at the base of his tailbone. She referred the couple to a maternal-fetal medicine specialist. The doctor explained that the baby had a sacrococcygeal teratoma (SCT), a tumor growing at the base of his tailbone. SCT is a rare condition which occurs in an estimated one in 30,000-70,000 live births. The cause is unknown.

“The doctor told us that these tumors can grow to be the size of the baby,” says Sarah. “He said it could rob one or both of the babies of blood, causing fetal heart failure. And he said that if the baby with the tumor survived, he might be cruelly disfigured. We discussed a range of options, one of which was to terminate my pregnancy. We were devastated.”

Referred to The Fetal Center at Children’s Memorial Hermann Hospital

The maternal-fetal medicine specialist referred the couple to The Fetal Center at Children’s Memorial Hermann Hospital for a consultation. But because of the COVID-19 pandemic, it would be 2 weeks before they could be seen.

“We were desperate for information,” says Sarah, who at the time worked with kids on the autism spectrum as a special education coordinator for the Fort Bend Independent School District. “I was trying to coordinate online learning for the students, but it was impossible to concentrate.”

Sarah reached out to fellow members of a Facebook group she had recently joined for Houston-area moms of twins. She says, “Everyone said the same thing: ‘Go see Dr. Papanna. Don’t let anyone else touch your twins.’ One mom, who didn’t know we lived in Houston, said, ‘If you have to get on a plane to come see him, get on a plane.’”

Maternal-fetal medicine specialist Ramesha Papanna, MD, is an associate professor at McGovern Medical School at The University of Texas Health Science Center at Houston (UTHealth) and is research director for The Fetal Center.

Out of Despair, Hope

“That is when I was finally able to take a breath,” says Sarah. “The Fetal Center team was so optimistic. They gave us hope.”

Dr. Papanna describes the baby’s condition as highly unusual. “To have an identical twin—one of two fetuses sharing a placental sac—with an SCT is extremely rare. We see a lot of complex and rare cases here, but I would have to say this was a once-in-a-lifetime-rare case for us.” 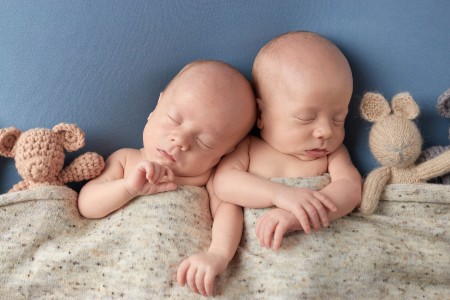 A large SCT tumor (such as the Nichols’ baby’s) can cause a variety of complications before and after birth. “An SCT tumor can be very vascular, requiring very high blood flow,” says Dr. Papanna. “This can cause the fetus’ heart to have to work harder. This condition, known as hydrops fetalis, can result in fetal anemia, fetal heart failure and even fetal death. Hydrops fetalis is also a potential risk factor for preeclampsia, a condition often characterized by high blood pressure (hypertension) and swelling (edema) in the mother, which can lead to serious, even fatal complications for both the mother and her unborn baby.”

Another potential complication was excessive accumulation of amniotic fluid, a condition known as polyhydramnios, which can lead to preterm labor, premature rupture of the amniotic sac, placental abruption and stillbirth. At around 28 weeks, the volume of amniotic fluid for Baby B became very high. “I was very large and very uncomfortable,” says Sarah. “Dr. Papanna monitored me closely with ultrasounds every two days. We were considering a fluid reduction, but the fluid remained stable, and I was able to tolerate my symptoms well until my blood pressure started creeping up.”

The goal was to get the babies to 32 or 33 weeks. “Babies with SCT tumors who are born after 32 weeks have an 80 percent survival rate,” says Dr. Papanna. “Since the babies were at risk of being born too early, we administered steroid shots to the mom to help the unborn babies’ lungs develop more quickly.”

At 33 weeks, Sarah developed preeclampsia. “I had been monitoring my blood pressure at home between visits, and it kept creeping up,” says Sarah. “At 33 weeks and one day, we threw in the towel.”

Carter and Carson Nichols were delivered at Children’s Memorial Hermann Hospital on June 22, 2020, by a team that included Dr. Papanna, Dr. Refuerzo and Dr. Austin, who would ultimately perform the surgery to remove Carter’s tumor.

“I was there at the delivery in case the tumor ruptured during delivery, which is always a risk,” says Dr. Austin. “Although it didn’t happen, we are always there and prepared, just in case.” 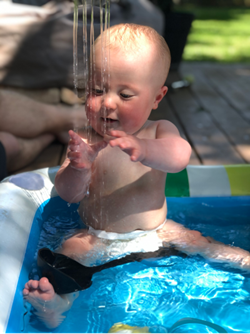 Twenty-two hours after the babies were born, Dr. Austin surgically removed the tumor from Carter’s tailbone. It measured 380 cubic centimeters, about the size of a full-grown baby’s head. After removing the tumor, she removed the baby’s tailbone and reconstructed his buttocks.

“Dr. Austin did an absolutely fabulous job,” says Sarah. “If you changed his diaper, you wouldn’t even know his bottom had been reconstructed. We adore her. We speak so highly of her in our house.”

Now 10 months old, both boys are thriving. Sarah and Trevor are grateful to the physicians, NICU nurses and rest of the team who cared for Sarah and her sons before, during and after delivery.

“For a long time, I didn’t think he would be here, or his brother,” says Sarah. “Carter is so healthy and active we forget sometimes what he went through. But it is only because of that team that we are together today as a family. I hope they know how grateful we are.”