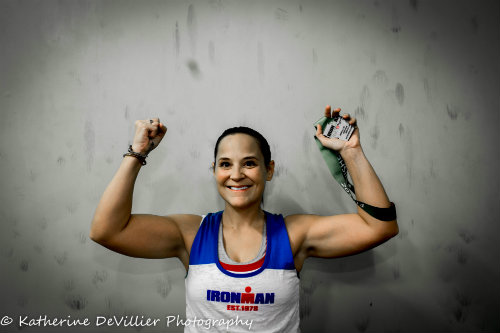 Opportunity often arrives disguised as misfortune. After Robin Schroeder was diagnosed with multiple sclerosis, she set out to ride the MS 150, a two-day cycling event organized by the National MS Society to raise funds for research. Her success led to an even greater accomplishment.

“I’d never done anything that athletic before,” says the 38-year-old, who started training in 2013 for the 2014 Houston-to-Austin ride. “But when April rolled around, I wasn’t where I needed to be in terms of endurance and was having a lot of trouble building muscle.”

Schroeder continued to train with an eye on the 2015 ride, without making any real progress toward her physical goals. When her neurologist stopped seeing patients in 2014, she found her way to the office of Philip Blum, MD, a general neurologist with Patient Centered Neurology at Mischer Neuroscience Associates.

“Robin is an outgoing and energetic person, and when she came to us, she was losing the ability to realize her dreams,” Dr. Blum says. “We listened to her goals, reviewed her medical records, did a thorough physical exam and discovered that the symptoms preventing her from meeting her goals were related not to MS but to her medication.”

So we switched to monthly intravenous steroids to keep my white cell count under control so I could continue to train and build muscle.”

Schroeder signed up for the Houston MS 150 in April 2015. When day one of the bike ride was canceled due to weather conditions, she registered for the Amarillo MS 150, scheduled for July.

“It was an amazing experience,” she recalls. “I did the whole ride and it went great – and it’s really hot in Amarillo in July. To be able to get to the point where I could do it was a very emotional and rewarding experience.”

After Amarillo, Schroeder returned to her normal workout routine and set her sights on competing in an Ironman 70.3 in the fall of 2016 – a 1.2-mile open water swim, 56-mile bike ride and a 13.1-mile run. Around the same time, Dr. Blum switched her medication to daily injections of glatiramer acetate, hopeful that it wouldn’t interfere with her ability to build muscle. She started training in January 2016, allowing herself nine months.

“I couldn’t swim, so I had to take swimming lessons. I’d never run more than a 5K so I had a lot of building up to do. I set my mind to it, and nothing was going to stop me,” she says.

“I finished it – the first triathlon I’d ever finished,” she says. “The open water swim was in a river. I was nervous but I did it, and that motivated me to keep progressing with my training.”

By August of 2016, she was working out 30 hours a week. On glatiramer acetate, she was able to build even more muscle than she’d built while training for the MS 150.

The Ironman 70.3 was held in September in Augusta, Georgia. She describes it as “a really hard day but not because of MS.” She lost a contact during the open water swim, was bitten by fire ants, and hit a bump on her bicycle and lost all of her race nutrition. “But I finished every inch of it, and that’s what I set out to do,” she says. “There’s no way I could have done that before I met Dr. Blum.”

Late last fall, Schroeder wore her Ironman medal to a routine physician office visit. “I got some looks in the waiting room, but I was so excited that I wanted to show Dr. Blum. I’d been working for so long to achieve the goals I set for myself. I pushed myself to do things I’d never done before. MS was kind of a wake-up call for me – to do what I can right now and make the most of it.”

For his part, Dr. Blum believes that success in treating MS lies in never presuming that symptoms can’t be controlled without a thorough investigation of the case.

“Robin deserves most of the credit because she was very clear about her goals,” he says. “We pride ourselves on helping patients achieve the goals they’ve set for themselves. As soon as we know their priorities, we start to work on improving their quality of life. When I saw her again after she completed the Ironman competition, she was very fit and all smiles. She had really blossomed.”

Looking to the future

Schroeder’s husband, Craig, completed the Houston MS 150 in 2016, the year after her successful Amarillo ride. In 2017, their daughter Avianna will be 12, the minimum sign-up age for the MS 150, and the family will ride together for the first time.

“I don’t know what the future holds for me medically, but my life has changed for the better since I learned I have MS,” she says. “I can’t say enough about Dr. Blum. From my first visit with him it was all about what I could do, not what I couldn’t do. The focus was on how to make it happen. I consider myself very lucky to have found a great MS doctor.”