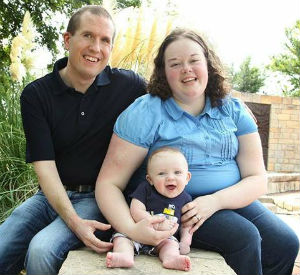 For 33-year-old physicist William Hartman, undergoing any type of brain surgery to treat his epilepsy – even the minimally invasive kind - commanded a giant leap of faith.

As part of the team responsible for analyzing how the International Space Station and its experiments interact with the space environment, as well as keeping astronauts safe during space walks, any cognitive loss for him could very well have meant the end of his career. But trust is exactly what Hartman did last October when he successfully underwent a groundbreaking new procedure called Visualase at Mischer Neuroscience Institute at Memorial Hermann-Texas Medical Center, with life-changing results beyond his wildest dreams.

Hartman’s epilepsy journey began when he suffered an accidental fall from a balcony at just three years old. He was airlifted to an Oklahoma hospital where he spent 4 days in a coma, and almost a year to the day after his accident he experienced a tonic-clonic seizure. Hartman was diagnosed with temporal lobe epilepsy and began what he feared would be a lifelong regimen of drug therapies with only moderate success at alleviating his seizures and auras.

“I changed medications often, but none of them made a tremendous difference – I would suffer five seizures a month instead of ten. I had constant migraines,” said Hartman. Remarkably, he managed to live as normal a life as possible, even obtaining his PhD in physics in 2007. Legally unable to drive because of his epilepsy, he bought a home less than a mile from his job and within walking distance of a pharmacy and grocery store so that he could walk wherever he needed.

His seizures continued, and in 2010, he underwent an evaluation by doctors at the Texas Comprehensive Epilepsy Program at Mischer Neuroscience Institute. He was diagnosed with focal left temporal lobe epilepsy with left sided hippocampal sclerosis. Given his high functional state, Hartman and his doctors agreed that the option of traditional open surgery carried a small, but real, risk of cognitive loss that he was not willing to take. Instead, Hartman underwent surgery to implant a vagus nerve stimulator (VNS), which uses electrical impulses to control seizures. The device can be an effective treatment for some epilepsy patients whose condition is not improved by medications.

“The VNS helped and the seizures were less frequent,” said Hartman. “But I still had several seizures each weekend, and up to 20 auras a day. I was able to hold them at bay somewhat during the week but when I relaxed, they piled up,” he said. Hartman and his wife welcomed a baby boy in 2013, and he was uncomfortable being left alone with his new baby and cautious when holding him for any length of time for fear he might suffer a seizure. “It was time to replace the battery in my VNS, and that is when Dr. Tandon suggested Visualase.”

According to Nitin Tandon, MD, associate professor of neurosurgery at UTHealth Medical School, who performed the innovative procedure, Hartman was an ideal candidate for Visualase. “The area of his brain that was affecting his seizures was evident and this new technology allows for laser precision that is just not possible with traditional open surgery,” said Dr. Tandon. “Visualase is very effective and well-proven, but he was understandably worried about risks.”

Dr. Tandon connected Hartman with a chemist who had undergone the same procedure but initially expressed the same concerns as Hartman. “It was very helpful for me to talk to another scientist who was on the other side of what I was facing, and who had experienced great success with the procedure,” said Hartman. “My wife and I decided it was worth the risk.”

On October 23, 2013, Dr. Tandon and his team used the Visualase to insert a tiny probe into the structure of Hartman’s brain that was causing the seizures, followed by a very small laser fiber. “We took him into the MRI scanner and turned on the laser fiber, and we measured the precise amount of heat produced by the laser. We can see in real-time images the structures of the brain being heated by the fiber to determine the exact amount of tissue we need to eliminate.”

The surgery lasted almost five hours, and Hartman was released from the hospital the next day. “The effects were immediate. Before the surgery, the auras I had experienced almost my entire life were a constant, almost like a sixth sense,” said Hartman. “They became stronger any time a seizure was coming on. I woke up from the surgery and the sixth sense was completely gone. I knew immediately the surgery was a success.”

Hartman returned to work just ten days after the surgery and has not suffered a single seizure or aura since. “I used to have to wake up several times in the night to swipe the magnet across my VNS to be able to go back to sleep,” said Hartman. “The difference has been life-changing. I can play with my son, sleep normally and am getting ready to learn how to drive a car.”